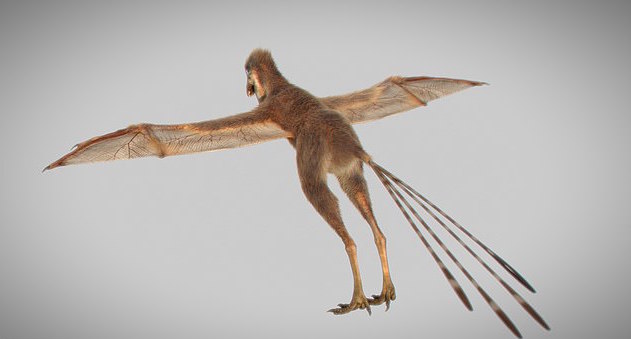 A fossil belonging to a newly discovered species of dinosaur dating back to the upper Jurassic period 136 million years ago is helping shed insight on the evolution of dinosaurs and birds.

The fossil, classified as a theropod, was discovered in the Liaoning province in China, and the researchers behind the find say that the animal had thin bat-like membranous wings.

This isn’t the first theropod fossil to be suspected of having bat-like qualities in China, but the find does help illustrate how dinosaurs experimented with different wing structures.

“Whereas the early fossil records of pterosaurs and bats are sparse, mounting evidence (primarily from China) of feathered non-avian dinosaurs and stemward avians that derive primarily from the Middle–Upper Jurassic and Lower Cretaceous periods has enabled the slow piecing together of the origins of avian flight,” the researchers wrote in a study published in the journal Nature.

The new species was named Ambopteryx longibrachium and was a member of a group of tree climbing dinosaurs called scansoriopterygidae.

The fossil is about the size of a magpie bird with long pointed wrist bones, and it’s this feature that suggests the bone was connected to a membranous wing, enabling it to fly or glide from tree to tree.

Trees would have been where Ambopteryx longibrachium would have spent most of its time, although the bird-like reptile could have soared down to the ground to catch prey.

Although it was previously believed that theropods only ate plants, the researchers say that it’s very likely that the new species was omnivorous and could have easily snatched up frogs and rats.

The research helps shed light on the evolution of flight, and membranous wings may have represented a brief moment of evolutionary experimentation before the emergence of feathered wings.