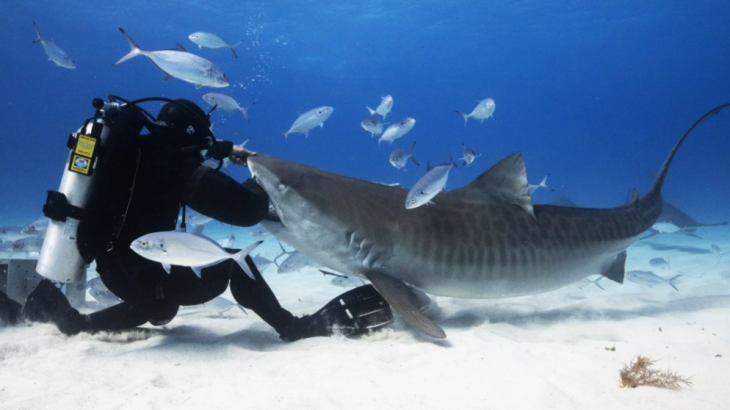 In Pixar’s “Finding Nemo,” two of the main characters – clownfish Marlin and royal blue tang Dory – run into a trio of sharks and fear they’re done for. But the group of apex predators reassure the pair by explaining that they are victims of sharks’ bad reputations.

“I am a nice shark, not a mindless eating machine. If I am to change this image, I must first change myself. Fish are friends, not food,” their pledge goes.

Real life sharks may not have a pledge, but one man has set out to prove that they really aren’t mindless eating machines.

Marine biologist Jeremiah Sullivan is probably best known for allowing sharks to bite him hundreds of times – all to test his underwater SharkArmor. But he’s also made it his mission to show that sharks’ bad reputation isn’t all true, and they’re not as they’re portrayed in films like “Jaws.”

In the upcoming “Man vs. Shark” special on National Geographic, he hitches a ride on a calm great white shark without becoming dinner.

“It became apparent to me that the shark was so chill that I was drawn out,” Sullivan told the Daily Beast. “So I slipped my hand under its caudal fin as it swam by, and the shark was so big it didn’t even flinch. You know, it was important to me to make very clear to the powers that be out there that kept putting out all this hostile conversation about these animals that that wasn’t the whole story.”

Which isn’t to say sharks aren’t dangerous, or that just anyone should go and try to befriend one.

In the special, Sullivan also convinces a tiger shark to bite him, to test his newest sharksuit. That bore some risks. Tiger sharks are known for their extremely damaging bites.

“We weren’t sure what was going to happen,” he said. “I had a lot of people with me that were quite sure that when one bit me, the other tiger sharks were gonna come swarm on me.”

Sullivan was inspired to study sharks after seeing the movie “Born Free” as a child. The movie portrays a positive encounter between lions and humans, and Sullivan wondered if such friendly interactions were possible between humans and other predators.

He first began developing his sharksuits in the 1970s.

Throughout the “Man vs. Shark” episode, Sullivan has nerve-wracking encounters with the ocean’s most feared predators. But time and time again, he proves sharks’ bad reputation to be wrong.

That said, he believes anyone who wants to interact with sharks should have a very healthy respect for them – and the damage they can do. When he’s witnessed people being bit, it’s often because they forget that respect or show off.

“But you know, I’m always looking to confirm my belief that there can be much more to the interactions between humans and sharks in the sea, and I’m delighted to say that that’s proven out to be true,” he said.

“Man vs. Shark” will air on July 17 on National Geographic TV.