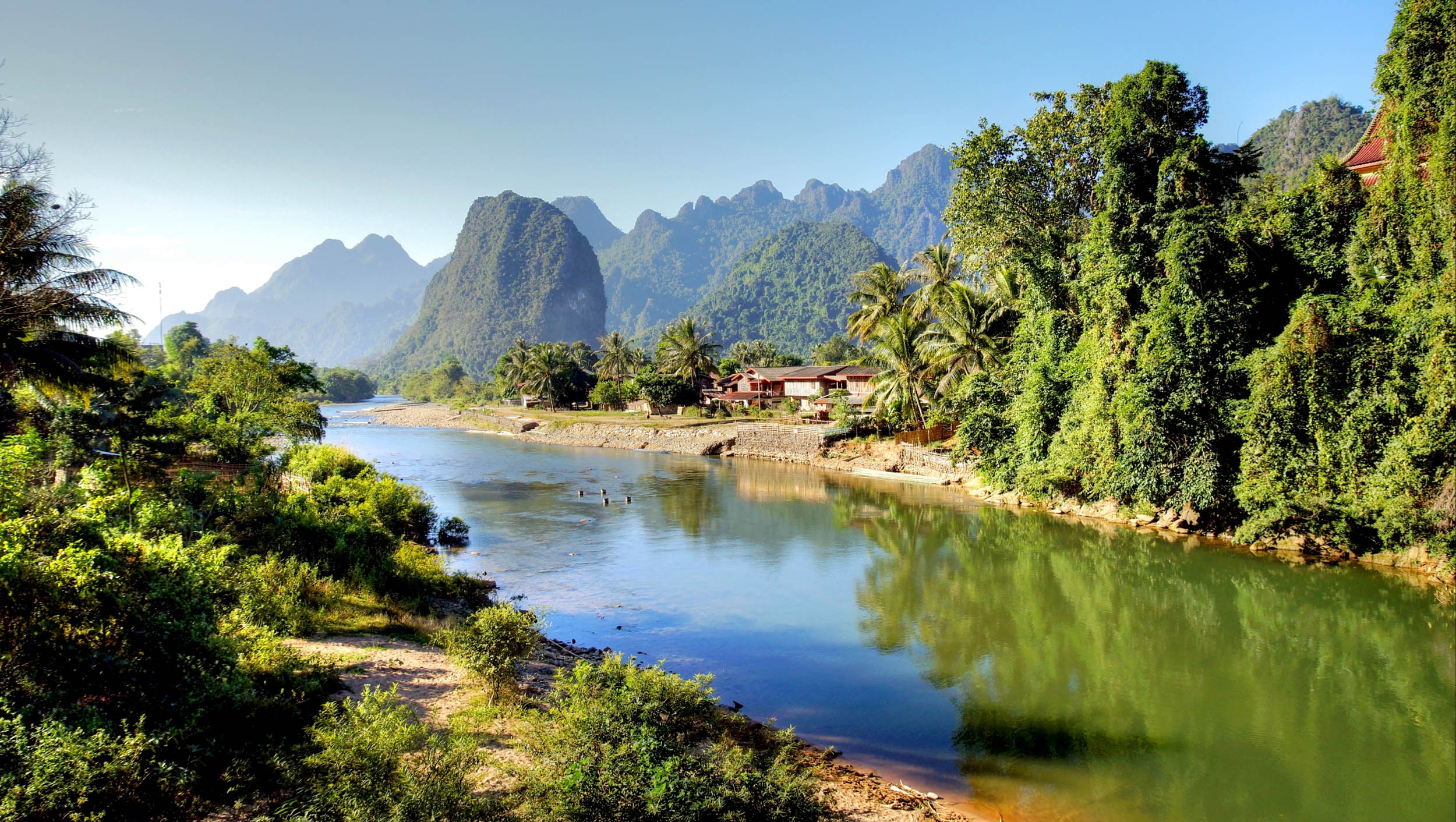 The site of the Don Sahong dam, less than 2 kilometers (1 mile) from the Lao-Cambodian border, is in an area famous for spectacular waterfalls and deep pools that is among the few habitats of the endangered Irrawaddy dolphin. A “coffer dam” blocks one of the Mekong’s main channels to allow construction of the hydropower project, which will suck in as much as half of the river’s water during the dry season.

Landlocked Laos is Southeast Asia’s poorest state, and all its neighbors far exceed its population of 7 million. But by virtue of geography and burgeoning Chinese influence, its secretive authoritarian leaders wield huge, unaccountable power over a 4,800-kilometer-long (3,000-mile-long) river that begins in Tibet and winds through six countries before emptying into the South China Sea.

China has built six dams on its stretch of the Mekong since the mid-1990s, and Laos plans nine. Many dams have been built on Mekong tributaries as well, and dozens more are planned. Experts say they are already damaging the world’s largest inland fisheries and degrading a rice bowl delta that helps feed Cambodia and Vietnam, the two countries farthest downstream. Even building a few dams on the lower Mekong will dramatically compound the damage to a river basin that 60 million people rely on, according to scientific models of dam impacts. Don Sahong dam threatens lives of millions in Southeast Asia

The Don Sahong dam “is like a one-ton bomb above us,” said Phoy Vanna, a tourist boat owner and father of 10 who has joined hundreds of other Cambodian villagers in protests. “I cannot predict the future of my children,” he said. “Now we have a job and we can survive because tourists come to visit.”

The rest of Southeast Asia is powerless to stop Laos. Under an international agreement on protecting the Mekong, the country is obliged only to consult its neighbors through the Mekong River Commission. Its neighbors’ positions are also complicated by commercial ties. Thai, Chinese and Malaysian companies are building dams in Laos and power companies in Thailand and Vietnam plan to buy the electricity.

Early last year, Thailand, Cambodia and Vietnam all requested that Don Sahong be delayed to give more time to study its possible effects. That flurry of official communications was already in vain. A day after Bangkok sent its letter stamped “urgent,” Laos informed its neighbors through the commission that it was “pleased” to bring consultations with them to a close.

Don Sahong could be especially damaging because it blocks the major route for fish migrations crucial to replenishing the region’s interconnected fisheries. The Mekong has many channels in the area but the others are largely blocked to upstream migrations by rapids and waterfalls.

For all that danger, the dam will have only a small power capacity: 256 megawatts. Laos has said the power will help fuel development in the south of the country. Overall, its plans for nine hydro dams call for exporting most of the electricity to Thailand and Vietnam, providing 12 percent of Thailand’s future power and about 4 percent of Vietnam’s.

“The government has told us that to build this dam is to develop the country,” said Sith Mok, an 18-year-old Lao woman who sells soft drinks and snacks to Western tourists. “Nobody could dare to challenge the government about building this project.”

Laos says new routes for fish to swim upriver have been created by deepening an inlet and blasting rapids. In an environmental impact study that did not consider effects on neighboring countries, Laos says the mitigation measures will protect fisheries. Malaysia’s Mega First, which is overseeing construction of the dam but has no experience in hydropower, has repeated those assertions.

The company is conducting a 10-year study on the effectiveness of mitigation measures, but final results won’t be available until long after the dam is built. It has contracted China’s SinoHydro Corp. to build the dam for $320 million.

A Mega First spokeswoman declined to provide any data. The office of the Lao prime minister, the natural resources ministry and the Lao members of the Mekong River Commission did not respond to requests for comment.

“We don’t know what the claims that things will be fine are based upon. This is unacceptable considering the high stakes,” said Ian Baird, a geography professor at the University of Wisconsin-Madison who studies Mekong fisheries. “If the measures don’t work well, it will be too late to undo the damage and there will be regional implications for food security and biodiversity.”

Research indicates the combined effect of planned Mekong dams would be devastating, turning much of the lower Mekong into sterile lakes.

Most recently, a study for Vietnam by Danish water consultancy DHI predicted Mekong Delta rice production would drop steeply because the dams would trap sediments, reducing nutrients flowing downstream. The study predicts annual fishery and farming losses of more than $760 million in Vietnam and $450 million in Cambodia, the two worst affected countries. The incomes of fishing and farming villages in both countries would fall by half.

With Don Sahong, Laos followed a pattern established five years earlier when it went ahead with the Xayaburi dam in northern Laos over the objections of neighboring countries. It also is preparing to build the Pak Beng dam near the border with northern Thailand, photographs taken by a river activist show.

For one, the Chinese dams have altered the ebb and flow of a monsoonal river, raising dry-season water levels and making downstream hydro development more viable. Second, China’s influence has made Laos’ ruling communist party less dependent on Vietnam, the country that will be worst affected by Mekong dams.

“The Lao government claims to see no reason why it should hold back on developing a shared river when China is already doing so,” Hirsch said.

Several Mekong dams have also been proposed in Cambodia. One on a tributary would cause Mekong fish stocks to drop 9 percent, according to a study in the Proceedings of the National Academy of Sciences.

The effects of existing Chinese dams are apparent to many across the Mekong from Laos in the sleepy northern Thailand town of Chiang Khong, which once bustled with hundreds of fishing boats. Now it’s mainly a point for petty border trade and for backpackers on their way to Luang Prabang, the old Lao royal capital.

More than a decade ago, a day’s catch could be 10 or more kilograms. Today, it’s 1 or 2 kilograms or often nothing. Some species of fish have gone altogether. Fishing as a main livelihood has almost disappeared.

“I’m a fisherman but I feel like I have to buy a can of fish to eat,” said 60-year-old Somdet Tanatunyakul.

He said the Chinese dams altered water levels and disrupted the life cycles of fish, which rely on cues from seasonal ebb and flow for migration and reproduction.

Unpredictable dam releases also flood and damage riverbank gardens that line the Mekong throughout Southeast Asia. More than half that riverbank land will be lost if all proposed mainstream dams are built, according to an Australian study.

“I’m worried. The riverbank is 20 percent of the land for farming,” said Kampai Bunmee, a Laotian-Thai villager, from a family that has been in the same riverbank village for three generations. “If more dams are built down the river, all that agricultural area will be permanently flooded.”

Researchers at the Stimson Center, a U.S. think tank, said there are signs sustained opposition from governments and civil society groups is making Lao dams more expensive and might cause some to be shelved. It said the Xayaburi dam’s Thai developer spent $200 million on modifications to reduce damage.

But Pianporn Deetes, a campaigner with International Rivers, an advocacy group, said the Mekong will be irreversibly damaged within the next decade without a binding agreement to control development.

“Each dam will be owned and operated by different companies, from different countries. Each of them will be focused on extracting the resources of the Mekong for the highest profit they can make,” she said. “Who is in charge of mitigating the impacts on thousands of river communities? In the end, whose Mekong is it?”