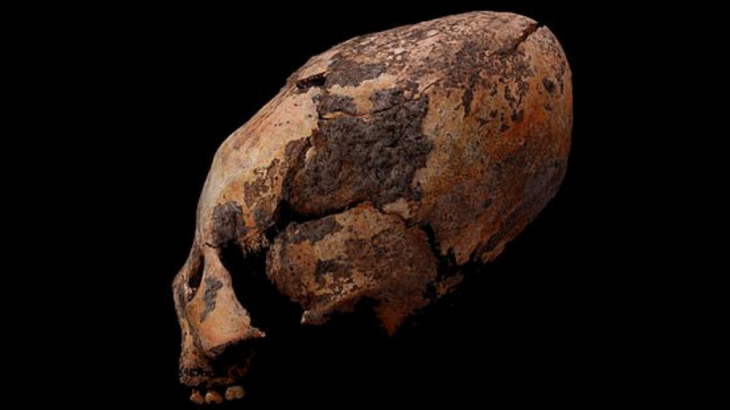 The practice of skull modification and elongation is said to date back 10,000 years, and archeologists theorize that different shapes were used to signify status or group affiliation.

Eleven skeletons with long oval shaped skulls dating back 5,000 to 12,000 years ago were excavated from ancient Chinese tombs.

Researchers from Texas A&M University made the discovery which resulted in 25 skeletons unearthed at the site, called Houtaomuga.

Of the elongated skulls, the researchers found that five belonged to adults with ages ranging from 3 to 40.

Based on the ornaments and pottery buried with the skeletons with elongated skulls, the researchers believe that the individuals came from wealthy, high-status families.

The findings, detailed in the Journal of Physical Anthropology, might indicate that the practice originated in Asia, but the researchers say there is not enough data to support this conclusion.

“It is too early to tell whether intentional cranial modification first emerged in East Asia and spread elsewhere or originated independently in different places,” said Qian Wang, a paleoanthropologist who studied the skeletons.

As with other forms of body modification, skull elongation would have taken place over a long period of time, and the skulls were not modified during burial.

Skull modification was practiced in many parts of the world and archeologists have uncovered flat, cone-shaped, and round skulls from burial sites in Central America, North America, and Australia.

In order to achieve the desired skull shape, pieces of cloth or boards tightly fixed to the skull may have been used, and in infancy, it would have been possible to simply mold the skull shape by hand because the skull is so soft.