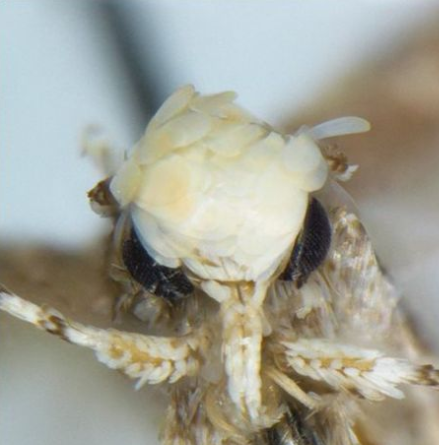 Moth with golden combover is named after Donald Trump

A minuscule moth with a familiar, golden coif was just named after the man who will soon be the 45th president of the United States.

Neopalpa donaldtrumpi was discovered in California by evolutionary biologist Vazrick Nazari, of Ottawa, Canada. He named the moth after president-elect Donald Trump due to the resemblance between the golden, side-swept fur that tops its head and Trump’s signature hairstyle.

The moth has rough, yellowish-white scales on its head with an off-white body and wings that are often brown or grayish-brown.

The species is native to Southern California and the Mexican state of Baja, California – quite ironic for a moth that was named after a candidate who ran on often fiery rhetoric around building a wall along the U.S.-Mexico border.

The moth is incredibly small, with a wingspan of just over a centimeter. It belongs to the family Gelechiidae, also known as twirler moths. When disturbed, twirler moths frequently twirl in circles.

Nazari says that he hopes the moth’s name will encourage Mr. Trump and the general public to pay attention to conservation efforts in the U.S. Many delicate ecosystems “contain many undiscovered and undescribed species, and deserve to be protected for future generations,” he told Live Science.

Mr. Trump won’t be the first president to have a scientific namesake; researchers have named nine species after President Barack Obama. Scientists have also named species after characters from Star Wars, actors such as Johnny Depp, and music legends Beyoncé and Johnny Cash.

Neopalpa donaldtrumpi isn’t the only insect with a Trump-like hairstyle. The puss caterpillar also has a distinctive golden hairdo. Experts don’t recommend that people grab a puss caterpillar because the tiny creatures can deliver a painful sting.