The controversy over drilling for oil in the Sangre de Cristos • Earth.com 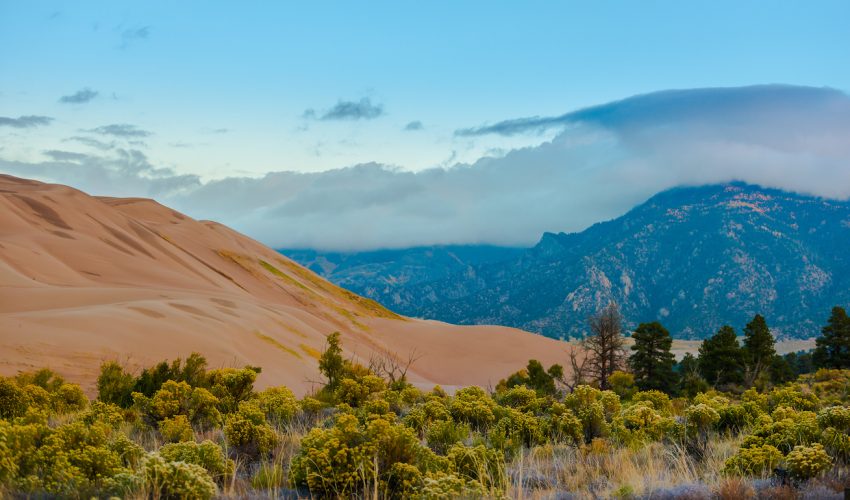 The controversy over drilling for oil in the Sangre de Cristos

Blanca Peak in the Sangre de Cristo mountain range of Colorado is set as the traditional eastern boundary of the Navajo Nation.  The mountain is sacred. Blanca is known to the Navajo as the Sacred Mountain of the East. Hogans, the traditional houses of the Navajo have doors facing east, in the direction reminiscent of the mountain.  Foundation of Navajo Culture by Wilson Aronilth Jr. is translated courtesy of Rick Crandall:

“We call it Sisnaajini (white shell mountain). It is the Sacred mountain made by First Man and First Woman, together with the Yei’i’ (the Holy People) and made with white shells, white lightening and rain clouds. Bald Eagles migrate through the valley in spring.”

The first known ascent of Blanca Peak was made by members of the Wheeler Party in 1874, William Bueler writing in Roof of the Rockies quotes their account:

“Nothing can surpass, either in ruggedness or in grandeur, the little piece of country immediately about us. When we first set foot on the summit we were struck by this beautiful subordination of summits we had not before seen anywhere among the mountains of Colorado.”

The Wheeler Peak expedition also reported that the Navajo used the top of Blanca Peak to trap eagles for feathers.  The ceremony is one that has been documented elsewhere in the American west and is a sacred rite for the Navajo, one in which a bald eagle is lured in and caught by hand.

If you live in Colorado, it’s hard to ignore the magic of 14ers.  Mountains of 14,000 feet or more in elevation are part of our heritage; they’re acknowledged by all to be special in a state that takes pride in high elevation.  There are guidebooks and histories written about the highest peaks of the Centennial State. People make goals to climb all the peaks, or all the easiest and least dangerous.  Some people even aspire to climb only one 14er in their lives. Swapping personal stories and legends of mountains over a local beer is the most Colorado of night time activities.  Only one of Colorado’s 14ers, Long’s Peak is protected by the National Park’s Service in Rocky Mountain National Park.

Colorado’s Sangre de Cristos are especially special and mysterious.  The name Sangre de Cristo is easy to translate as ‘The Blood of Christ’ but why the name graces these peaks is hard to pin down but seems oddly apt in its mystery.  Some say the name comes from the strange last utterance of a dying Spanish missionary, others think it’s the color of the mountains at sunset. The Sangres contain some of Colorado’s hardest to climb peaks and some of its most beautiful scenery.  The mountains rise to form the edge of the San Luis valley creating some of Colorado’s most stunning elevation gradients.

Utah is Colorado’s neighbor to the west and shares much of the same fantastic scenery.  Being from Western Colorado, places like the deserts around Moab Utah are as familiar as the more stereotypically Colorado scenery of the mountains.  In 2017 Gary Herbert, governor of deep red Utah, asked the Bureau of Land Management (BLM) to re-evaluate its plans to lease three plots for oil and gas development near Dinosaur National Monument.  The Salt Lake Tribune quoted Herbert in comments he made as part of an environmental assessment to the BLM,

“The state wishes to ensure leasing of these parcels does not impact visual resources or cause light or sound disturbances within [Dinosaur] National Monument.” 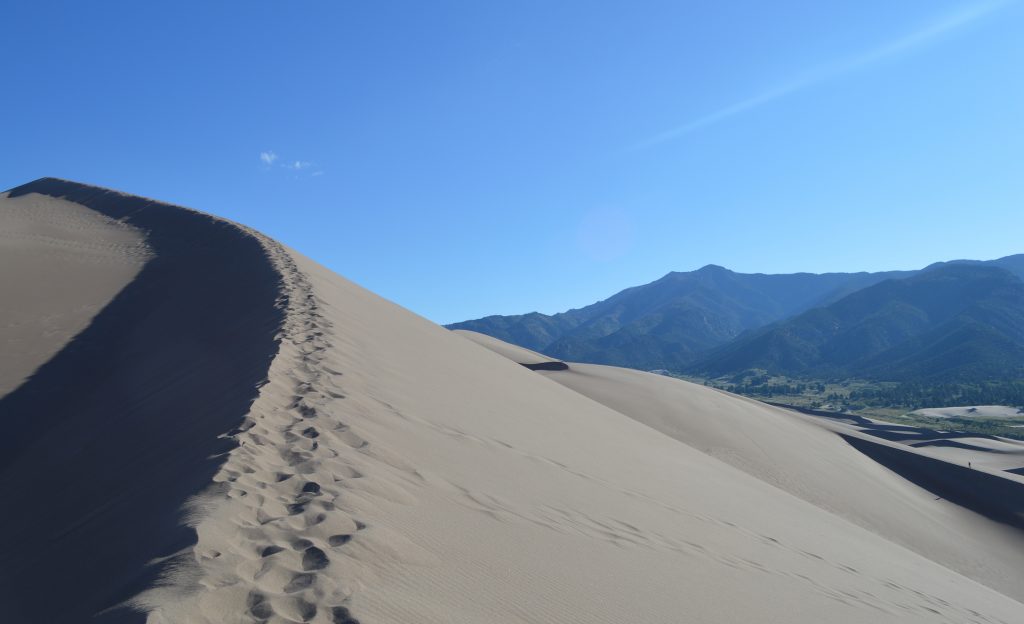 Dinosaur National Monument straddles the border of Colorado and Utah, divided between both states.  Besides the spectacular fossil beds the monument is known for, Colorado’s last wild river flows through Dinosaur as well.  In the 1960’s the Sierra Club and others fought a dam project proposal for the Yampa River inside Dinosaur National Monument, in the end the dam was halted before it began.  The downside is that a compromise allowed the damming of the spectacular Glen Canyon, a place I’ll never see as it was.

The western United States is all too often a battlefield for the fight between conservation and development.

Governor Hickenlooper of Colorado, a much more purple state than Utah, failed to step in as Herbert did for Dinosaur National Monument and it’s no great surprise, Conservation Colorado, an organization that rates state politicians on their environmental stances, wrote in a scorecard for 2013,

“While it is extremely important to address oil and gas impacts, it is hard to do politically; the oil and gas industry is wealthy and has an army of lobbyists at the capitol. In addition, Governor Hickenlooper is a strong supporter of the industry and has resisted many of the efforts to better regulate oil and gas activity in Colorado.”

Anyone living in the American west and aware of any sort of environmental politics in the area is aware of a deep ambivalence on the part of many politicians.  I would go even further and say many politicians pay lip service to the environment but few venture further into the outdoors than political photo ops require of them.  Hickenlooper is merely following a long tradition of despoiling the western landscape for short-term financial gain and political benefit. The truly astounding part is that Herbert of Utah did better than Hickenlooper.  It’s impossible to know if there is specific corruption in this case either, as the oil and gas lease proposal put forward is anonymous.

The area of proposed oil and gas development is near Blanca Peak and another mountain sacred to the Navajo.  The area would touch the Sangre de Cristo wilderness area. The wilderness area is 219,900 acres and includes much of Great Sand Dunes National Park and Preserve.  Mountain lions and black bears live there with elk, deer and bighorn sheep. The Navajo are against development in this special area, The Denver Post quoted Russell Begaye president of the Navajo Nation,

“This land is sacred and the Navajo Nation will always protect the beauty and sacredness of the land.”

The Navajo Nation isn’t alone either.  The Sierra Club has been leading trips into the area to raise awareness and oppose development.  The Center for Biological Diversity has also opposed the oil and gas leases as has Conservation Colorado and democrats in the state.  Locals in the organization Citizens for Huerfano County oppose development, despite the potential jobs it would create.

Unfortunately the BLM has left open a measly 10 day period to receive comments from the public about the proposal.  The good news is that there is still time. Comments open on July 20 and close on July 30. The Denver Post quoted the opposition,

“…And we object to being sidelined by diminished public comment periods, expedited paper trails and tepid BLM environmental assessments that find ‘no significant impact.’”

I don’t doubt Navajo claims to the sanctity of the area.  I’ve seen some of the place and I hope to see more of it without irreparable scars.  The push to develop near National Parks and to quicken the pace of oil and gas leases is part of Trump’s Secretary of the Interior Ryan Zinke’s plans to increase development on public lands.

Politico reported earlier this month that Ryan Zinke, his wife and his family foundation, have recently been involved in business dealings with David Lesar, the chairman of Halliburton.  Halliburton would likely benefit from any oil and gas leases on public land. A developer backed by Lesar is proposing development of a former industrial area near Zinke’s hometown of Whitefish Montana as a resort, including a microbrewery that would be set aside for Zinke.  Zinke has been petitioning the local government for the permission to build a microbrewery since 2012.

Zinke’s wife has promised in writing that the development would receive land for a parking lot donated to Zinke’s foundation for the creation of a veteran’s park.  A tweet from Veteran’s Voice Foundation sums up the situation well,

“Land that @SecretaryZinke promised to honor veterans will now be a parking lot, as part of a project with Halliburton. “This is all a perfect encapsulation of how Ryan Zinke has operated at Interior – being deceitful about intent, and always seeing how he can personally benefit””

It isn’t hard to see that the Navajo Nation, the Sierra Club and other organizations, even local people are nothing but a small obstacle standing in the way of Zinke and the rest of the Trump administration.  At least there’s still time to fight this particular proposal when the BLM opens the comment period on the 20th of July for ten days. 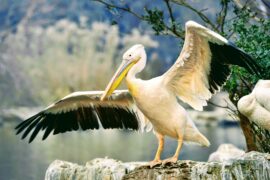