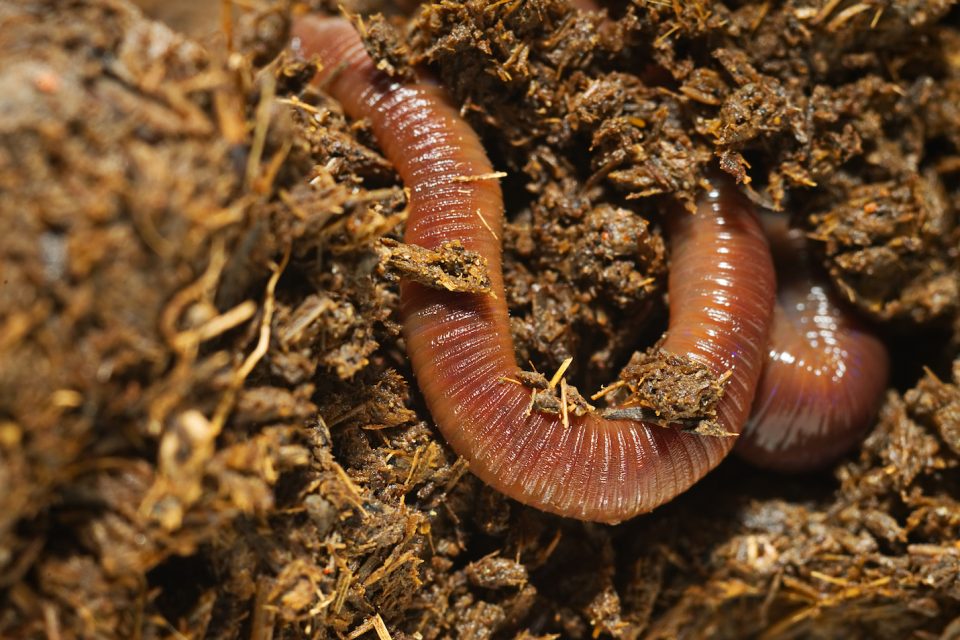 Edgar Allan Poe’s “The Conqueror Worm” is a lurid meditation on death, laden with references to the grim reaper’s retinue.

But see, amid the mimic rout,

A blood-red thing that writhes from out

And what proper meditation on death would be complete without mention of the reaper’s housekeepers? Classic literature is wriggling with allusions to detritivores and decomposers such as maggots and worms, viscerally evoking images of death and decay. Though unlike maggots in that they do not require carrion, and in fact may prefer plant and fungal matter, earthworms do sometimes eat decaying animal matter.

And they’re conquerors in both the sense intended by Poe—they’re happy to munch on anything from a rotting leaf to a rotting philosopher—and in the sense that they have slowly invaded the North American continent in the wake of European conquest.

Prior to the arrival of Europeans, earthworms were absent from the fauna of the northern part of North America. They are thought to have been extirpated during the last glacial period, which began some 21,000 years ago. Living in the top part of the soil, they were likely scrubbed out by the powerful movement of ice sheets across the continent.

However, with the incursion of Europeans, species from across the Atlantic soon set up shop in the soils of the Americas. The first introductions likely occurred as the result of soil used as ship ballast being dumped on the virgin shores. Further introductions resulted from the transport of worms and their egg cocoons on the roots of plants.

Species from Asia soon joined the vermicultural melting pot. There are some 60 species of introduced earthworm in North America. Most prominent are those in the European genus Lumbricus, which includes the well-known nightcrawlers, and those in the Asian genus Amynthas, known as snake or jumper worms. More recently, their use as fishing bait has introduced them to previously untouched forests; unused worms are dumped on the ground, which they then colonize.

Though earthworms have historically been perceived as inherently helpful to the environment, breaking down organic matter and aerating the soil, in environments to which they are not native, they have proven to be anything but. In fact, in some regions, they have been terribly destructive to sensitive plant and animal life.

North American forests, particularly those north of Pennsylvania, have largely evolved without earthworms in the last 11,000 years, following the recession of the glaciers. (There are some 100 native species of earthworm in the northwest and south.) Because of this, forest floor ecology is much different than in the forests of Europe and Asia, which evolved with earthworms.

North American hardwood forests, in particular, have evolved to produce a slowly decomposing, fungally dominated layer of duff, composed of shed leaves and small branches. This thick, fluffy layer of organic matter supports a unique ecosystem of nematodes, insects, and small animals such as salamanders and rodents. These animals in turn support larger creatures such as birds. Duff is also necessary for the germination of many types of seeds, including those of trees. Earthworms seem to prefer the rich substrate produced by hardwood forests to that produced by coniferous forests. And they prefer the duff produced by trees such as maples, basswoods, sweet gums, tulip poplars, and birch to that of more tannic oak forests.

When non-native earthworms invade these forests, they have detrimental effects on the duff layer. In addition to eating small seeds and impacting the regeneration of the plants that grow from them, they also completely change the dynamics of this soil. They decompose the layer much more quickly than native invertebrates and fungi. This has wide-ranging impacts. Natives who require this layer for sustenance, from plants to insects, are left without a home and a source of food. The layer shifts from being fungally dominated to bacterially dominated. Some plants require symbiotic fungi to germinate and grow and without them are unable to flourish. Because the layer of leaf matter is more quickly decomposed, soil compaction increases, making it even harder for natives to subsist.

Ecosystems invaded by non-native earthworms may show visible effects in fewer than 5 years. Photographs show forest floors once rich in plant diversity almost devoid of herbaceous life after having been decimated by worms. This primes the habitat for invasions by non-native plant species, such as the pernicious buckthorn and Asian honeysuckle. The different nutrients made available by bioturbation, which brings more mineral soils to the surface, combined with the removal of native herbaceous plants, clears space for invaders.

These invasive plants in turn reinforce the predominance of worms by producing easily digested foliage. One study demonstrated that the removal of honeysuckle and buckthorn actually reduced worm numbers. And the invaders don’t just affect the understory. Trees themselves are affected by the removal of duff. A 2017 study demonstrated that sugar maples, whose root systems are shallow and rely on the duff layer, were damaged by the presence of earthworms.

The loss of duff also has serious implications for carbon retention. Because earthworms quickly digest and excrete leaf matter, carbon is more quickly released into the atmosphere. A 2015 study indicated that they reduce key soil nutrients, including potassium, calcium, phosphorus, and magnesium as well. Nitrogen cycling is also negatively affected, releasing more of it into the air and water. Non-native earthworms may also compete directly with some soil organisms. A 2017 study suggested that they might actually eat the eggs of springtails, or collembolans, an important invertebrate in the soil food web. Because different species of worms inhabit different soil strata, their combined effects may be even more problematic.

Scientists who study the phenomenon of invasive worms advise gardeners to be careful about moving soil and mulch, which can unintentionally introduce worms to new areas. Though they spread relatively slowly once introduced, repeated movement of substrate can accelerate the process. Those who visit natural areas should wash their boots and tires before entering and leaving to avoid transporting small worms or their eggs. And anglers should dispose of worms in the garbage rather than releasing them. We don’t need any more crawling intruders.