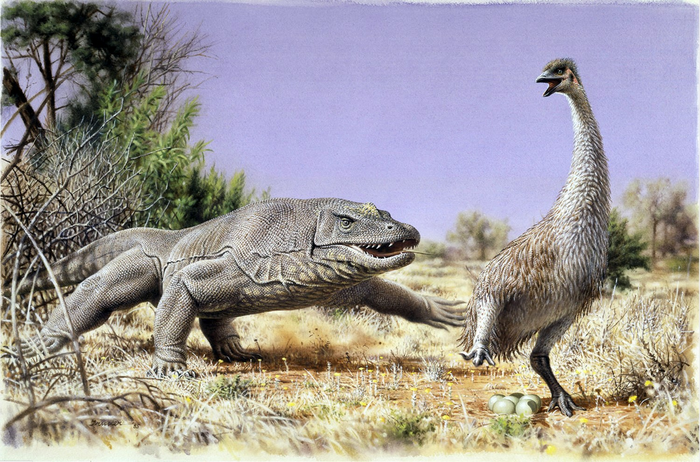 There are thousands of Pleistocene sites across Australia where the fragments of giant egg shells have been found. These shells often have characteristic burn marks, indicating that they have been cooked, rather than scorched in bush fires. They date to around 50,000 years ago and are thought to represent a source of food for the first Australians. However, scientists have not yet been able to identify the species of bird to which the eggs belonged because the shells have spent thousands of years out in the Australian heat and the DNA has degraded beyond recognition.

There were always two contenders for the bird species responsible. The first, and most likely, was Genyornis, an extinct flightless bird that stood over two meters tall, weighed 220–240 kg, and laid melon-sized eggs of around 1.5 kg in mass. But some scientists argued that, because of the shell shape, size and thickness, the eggs may have been laid by the giant malleefowl, Progura, instead. This extinct bird was far smaller, being similar in size to a large turkey and only weighing in at around 5–7 kg.

The distinction is important because Genyornis is thought to have become extinct only a few thousand years after the arrival of the first Australians, some 65,000 years ago. Although there is no fossil evidence of kill sites where the birds were butchered, the thousands of sites where eggs have been cooked (and presumably eaten) lend support to the idea that humans were involved in the demise of this mega-faunal species.

If, on the other hand, the eggs belonged to Progura, which is a flying bird that laid its eggs in mounds on the ground, then humans would in no way be implicated in the extinction of the giant Genyornis. In fact, there would be no direct proof of human–Genyornis interaction at all, and it may even be possible that this species had already gone extinct by the time humans arrived in Australia.

An international team led by the University of Cambridge has now undertaken a multipronged analysis in order to identify the mystery egg-layer. The experts have used the very fragmented ancient DNA, but have also extracted ancient proteins from the powdered eggshells and compared the protein sequences to those of living bird species using a vast new database of biological material, known as the Bird 10,000 Genomes (B10K) project.

The results indicate that the eggs were indeed laid by the extinct giant bird, Genyornis. Also known as mihirung – or “Thunder Bird,” this huge bird with tiny wings and massive legs roamed prehistoric Australia, possibly in flocks.

“There is no evidence of Genyornis butchery in the archaeological record. However, eggshell fragments with unique burn patterns consistent with human activity have been found at different places across the continent,” said senior co-author Professor Gifford Miller from the University of Colorado.

“This implies that the first humans did not necessarily hunt these enormous birds, but did routinely raid nests and steal their giant eggs for food. Overexploitation of the eggs by humans may well have contributed to Genyornis extinction.”

The analysis and comparison of protein sequences enabled the researchers to conclude definitively that the eggshells did not belong to a species of the Magapodiidae, such as Progura. The researchers were also able to draw up an evolutionary tree using the protein sequences of other extinct and extant birds in closely related groups, and identify the position of the egg-layer in relation to other bird taxa.

“The Progura was related to today’s megapodes, a group of birds in the galliform lineage, which also contains ground-feeders such as chickens and turkeys,” said study first author Professor Beatrice Demarchi from the University of Turin.

“We found that the bird responsible for the mystery eggs emerged prior to the galliform lineage, enabling us to rule out the Progura hypothesis. This supports the implication that the eggs eaten by early Australians were laid by Genyornis.”

The study confirms that using the sequences of ancient proteins is a powerful tool for reconstructing the evolutionary history of ancient organisms and clarifying their phylogenetic positions. Proteins from the ancient eggshells provided a reliable source of information in a situation where DNA analysis gave inconclusive results.

“Time, temperature and the chemistry of a fossil all dictate how much information we can glean,” said study co-author Professor Matthew Collins from the University of Cambridge’s Department of Archaeology. “Eggshells are made of mineral crystals that can tightly trap some proteins, preserving this biological data in the harshest of environments – potentially for millions of years.”

The researchers point out that the Genyornis egg exploitation behavior of the first Australians likely mirrors that of early humans with ostrich eggs, the shells of which have been unearthed at archaeological sites across Africa dating back at least 100,000 years.

“While ostriches and humans have co-existed throughout prehistory, the levels of exploitation of Genyornis eggs by early Australians may have ultimately proved more than the reproductive strategies of these extraordinary birds could bear,” said Professor Collins.