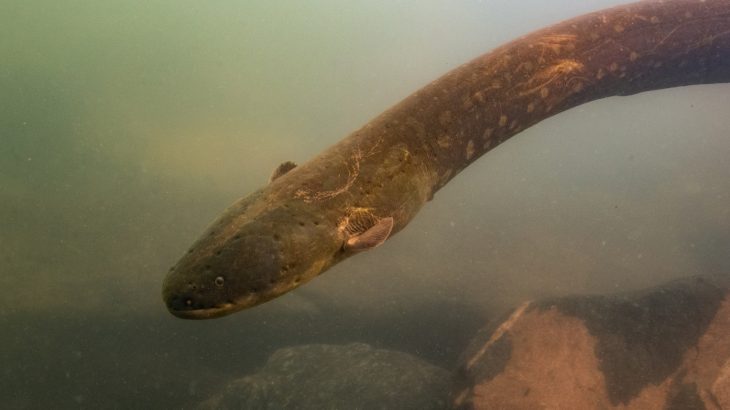 A team of scientists from the Smithsonian’s National Museum of Natural History have discovered two new species of electric eel within the Amazon basin.

For more than 250 years, scientists have known that electric eels reside in the basin and within South American rivers, however, it was previously thought that all the eels belonged to a single species.

But after analyzing 107 fish collected from Brazil, French Guiana, Guyana, and Suriname, scientists now know that Amazonian eels belong to three distinct species that all evolved from a shared ancestor millions of years ago, with one such species being capable of generating a greater electrical discharge than any other known animal.

This discovery proves just how little is currently known about the biodiversity within the Amazon rainforest.

“These fish grow to be seven to eight feet long,” said study leader C. David de Santana, a research associate in the museum’s division of fishes. “They’re really conspicuous. If you can discover a new eight-foot-long fish after 250 years of scientific exploration, can you imagine what remains to be discovered in that region?”

For six years, de Santana and his team, with collaborating researchers from the University of São Paulo’s Museum of Zoology, researched eel diversity, as well as the diversity of other electricity-generating fishes, within South America. And although most eel specimens looked fairly similar, the eel’s DNA told a different story. The collection of 107 specimens belonged to three distinct species.

Upon closer research, de Santana found that the eels had unique head shapes, defining characteristics on the pectoral fin, as well as distinctive arrangement of pores all over their bodies. Furthermore, each species had its own geographic distribution, as well.

Electrophorus electricus is seemingly confined to the highlands of the Guiana Shield.  Electrophorus voltai, one of the two newly discovered species, primarily lives on the Brazilian Shield. And the third species, Electrophorus varii, resides in murky, slow-flowing lowland waters.

These three species evolved from two groups of electric eels that began to evolve in South America about 7.1 million years ago, de Santana believes. The common ancestor of E. voltai and E. electricus lived in the waters of the ancient highlands.

But the ancestor of E. varii lived in the murky lowland waters. De Santana and team believe E. voltai and E. electricus diverged about 3.6 million years ago when the Amazon River changed course, and E. voltai evolved to discharge up to 860 volts of electricity, which is massive compared to E. electricus’s 650 volts.

This discovery could help scientists investigate how animals generate high-voltage electricity and how they evolved to do so.

The findings are published in Nature Communications.