Electric eels leap out of the water to deliver a stronger shock • Earth.com 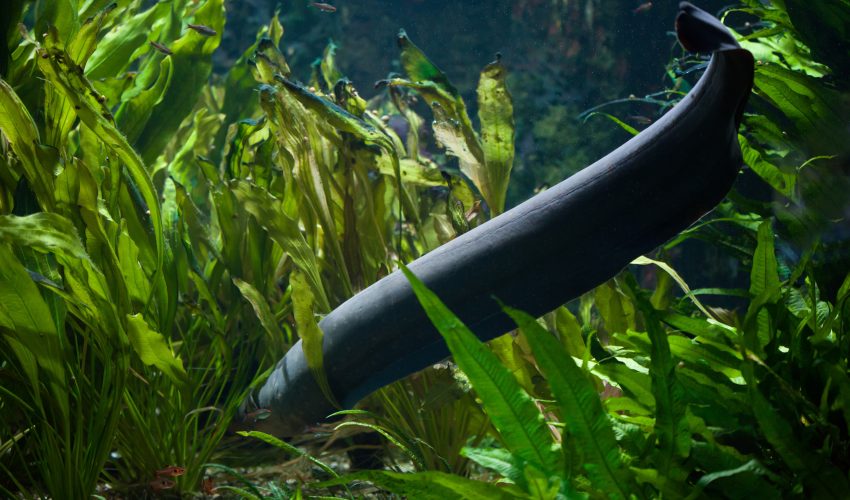 Allowing yourself to be shocked by electric eels in the name of science might seem foolhardy, but that’s just what Kenneth Catania from Vanderbilt University did to measure the electric current that an eel produces out of the water.

Catania has been researching eels for years and had reported on their ability to deliver twice as much electric discharge by wrapping themselves around their prey. But Catania soon noticed that the eels in his lab often jumped out of the water to deliver a shock to perceived threats and predators.

Cantina observed this behavior while attempting to scoop up eels in an electrically conductive metal net. The eels, noticing the threat, would jump out of the water to attack the net.

At first this behavior confused Catania, but then he hypothesized that this was a way for the eel to protect itself and amp the power of its electric shock, because the current would unaffected by the water.

“They aren’t just simple animals that go around shocking stuff. They’ve evolved to produce stronger and stronger electrical discharges, and in concert they’ve evolved these behaviors to more efficiently use them,” said Catania.

To better understand the dynamics of the electric circuit created by an eel while shocking another animal, Catania willingly allowed himself to be shocked by a relatively small eel in a contained setting.

Catania created an apparatus that measured the intensity and strength of the electric current as the eel leapt out of the water and made contact with his arm.

The shock produced wasn’t enough to do any real damage, but did deliver a lot of pain. Catania’s device recorded a peak of 40-50 milliamps in the eels’ electrical current.

“It’s impressive that a little eel could deliver that much electricity. We don’t know the main driver of the behavior, but they need to deter predators, and I can tell you it’s really good at that. I can’t imagine an animal that had received this [jolt] sticking around,” said Catania.

Catania’s research can now be used to measure the power of an electric shock delivered by differing sized eels. While this is useful information for scientists, it also provides a good reminder to the rest of us: don’t mess with electric eels!