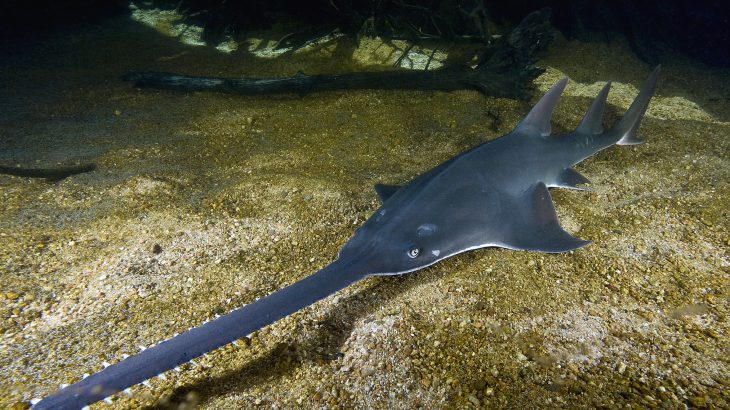 You may think of the Caribbean as a physically beautiful location to lay on the beach and sip on cocktails. Many experience the Caribbean this way, superficially as a backdrop to a nice vacation, but the Caribbean also has much more to offer.

Located at the southern edge of North America, in a zone of transition to the tropics of Central and South America, it’s no surprise that the Caribbean is a hotspot for biodiversity. With 7,000 individual islands scattered through the sea, it’s also no surprise that the region has some fascinating endemic species. Species like Jamaica’s SwallowTail Hummingbird (Trochilus Polytmus) or Cuba’s giant, flightless owl show just a glimpse of the fascinating wildlife found (or once found) in the Caribbean.

UN Environment reports that the Caribbean is home to 11,000 plant species, around 72 of which are only found in the region. Meanwhile, Caribbean Sea itself is just as impressive as the islands it fosters.

Overfishing and reef decline are leading to a historic decline of fish populations throughout the Caribbean. When I visited Jamaica years ago as part of a team documenting overfishing, the lack of options for fishermen was palpable. People with little money and little education turn to the only work they know to feed themselves. Throughout much of the Caribbean, all some people know is fishing, a way of life that has supplied abundant nutrition that may be coming to an end due to human overreach. This sad situation has led to many programs focusing on protecting marine species and working towards sustainable fisheries. For some fish, the situation is considerably more urgent than for others.

The Largetooth Sawfish, (Pristis pristis) is just one fish of many species living in the Caribbean but it is a rather bizarre specimen. True to its name, the fish has a long protrusion on its snout lined with teeth, making it appear like a saw. Interestingly, the sawfish uses this appendage to find fish and attack them for food. Tiny sensors line the ‘saw’ allowing the fish a 6th sense which can detect the tiny electrical currents created by living animals. With this sense, the sawfish can find prey fish even in dark or muddy waters and attack the prey, securing a meal.

Sawfish may look completely bizarre, but they have shark-like bodies and are rays. Sawfish interestingly can live in varying levels of salinity from fresh water to open ocean but are most common in estuaries and shallow bays. Often, sawfish are found in seagrasses or mangrove habitats.

Strangely, there is even a population of the fish in Lake Nicaragua. These fish are quite large, with an agreed maximum size of 19.7 feet long but some reports claiming fish of 23 feet in length. In fact, the largetooth sawfish is among the world’s largest fish. Unfortunately, the fish is also extremely endangered.

Sawfish have historically been caught as impressive sport trophies and have been used for traditional medicine and for religion. In parts of Africa, the saws are used for tools or the teeth are attached to roosters legs for cock fights. Direct fishing but also the decline of the oceans lead to the decline of the largetooth sawfish as well. Sawfish are also often killed as bycatch, becoming entangled in fishing gear intended for other species.

But recently, the Caribbean boosted protection for the rare fish. Mongabay reports that on June 5, Caribbean nations agreed to add the sawfish to Annex II of the Specially Protected Areas and Wildlife (SPAW) Protocol under the Cartagena Convention. Protection for the closely related Smalltooth Sawfish have yet to be put into place under SPAW.

Annexes I and II are the highest levels of protection for a species under the Cartagena Convention. This means that owning, trading and killing the largetooth sawfish is now illegal in the Caribbean. The Cartagena Convention was originally a protocol for cooperation in case of oil spills, agreed upon between Caribbean nations under the UN in 1983 and put into force in 1986. Later the convention was expanded to protect special areas and species as well as create land based marine pollution controls. Much more research is still needed to understand the biology of such a unique fish, but strict protection is a good place to start.

Caribbean nations agreeing to protect the largetooth sawfish is a step towards securing their future in the world’s oceans. However, protection for the smalltooth sawfish would be very helpful as well. Globally, there are five species of sawfish and all of them are endangered. Greater protection for all of these fish would be welcome. But to truly secure their future existence, the world’s fisheries would need to be sustainable as well, a tall order for the tragedy of the commons that has become our oceans.