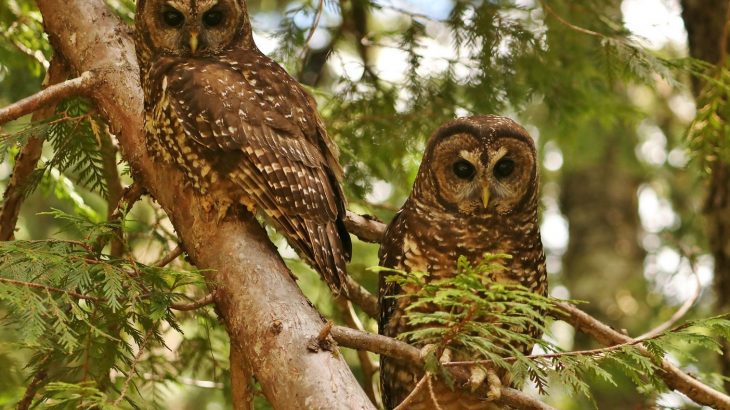 Back in 1990, the Endangered Species Act provided protection for a number of impacted species. One in particular was the Northern Spotted Owl, which was facing an increasing threat from the loss of the old-growth forest in which it lives.

Now, despite the long-term preservation of this habitat within Washington’s Mount Rainier National Park, new research shows that this species has declined drastically in the last two decades.

So if the old-growth forests in this region were preserved, how could the Northern Spotted Owl still be in decline? The study published in The Condor: Ornithological Applications details a new culprit: the spread of Barred Owls. This is a closely related, competing species that has now moved into the Spotted Owls’ territory from the east. Beginning in 1997, biologists started to notice that Barred Owls were showing up more and more in Spotted Owl territories.

According to the researchers, Barred Owls have experienced a very successful range expansion throughout the Pacific Northwest. Their ability to eat a wider range of foods and use a greater variety of forested habitats have been paramount in their ability to infiltrate other territories.

Scientists predict that if this trend continues, the Spotted Owl could end up extinct within this region in the next six to eight decades. But within Mount Rainier National Park, there are still measures that can be taken to ensure this doesn’t happen.

“Conservation managers can focus on protecting old-growth habitat with steeper slopes, as we found this to have higher Spotted Owl occupancy, and can continue to monitor Barred Owl populations to better understand their effect on local Spotted Owl populations,” explains Mangan. “Managers will need to consider some creative solutions, and likely some unpopular choices, if the Northern Spotted Owl is going to be prevented from going extinct on public lands.”