Enormous iceberg that broke off of Antarctica is now spinning • Earth.com 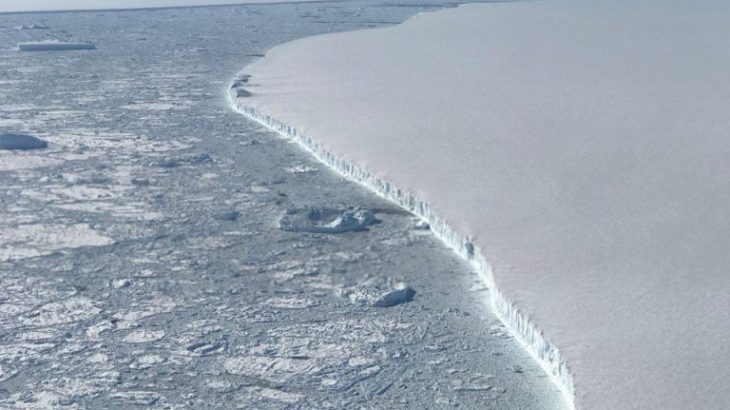 Enormous iceberg that broke off of Antarctica is now spinning

A-68, the massive iceberg that broke away from the Larsen C Ice Shelf in July 2017 that is the size of Delaware, is moving again after being grounded for some time on the seabed.

When the iceberg first split from the ice shelf, many weighed in on the potential ramifications and where the iceberg would end up.

There were concerns that pieces of the ice formation could eventually drift out into international shipping lanes. But now, a little over a year later, the iceberg seems to be stuck on a corner of the seabed of the Weddell Sea and has begun to rotate.

Newsweek reported on the new movement of A-68 after speaking with Mark Brandon, a polar oceanographer from Open University in London.

Brandon explained that because it’s winter in the Antarctic currently, tracking the movements of the iceberg is difficult because it’s dark, cold, and largely obscured by clouds.

“It is the middle of the Antarctic winter and nobody is on the ground looking at this,” Brandon told Newsweek. “The light has come back to the part of Antarctica where the iceberg is—but it is still very cold. That means we only have satellite data.”

Recent satellite temperature imagery from the Sentinel-1 SAR and Suomi NPP satellite show that iceberg is on the move after being grounded. However, it still seems to be stuck at one end of the iceberg and so A-68 is rotating because of the winds and currents in the area.

“Around the 12th July 2018 it seems to have broken free from what it was grounded on and began rotating in an anticlockwise direction,” Brandon said. “Over the rest of July and August, it has rotated a little more than 90 degrees. It appears to be grounded at its western end and so it is rotating around that.”

A-68 is predicted to continue rotating until it eventually collides with the Larsen C Ice Shelf.

“If A-68 does collide with the Larsen C Ice Shelf, it will be slow, and there won’t be explosions or anything,” Brandon told Newsweek. “But I would expect the forces within the ice to break iceberg A-68 into smaller, but still huge, fragments. It is possible it could fracture the ice of the ice shelf. The satellite imagery when this happens will be magnificent and it will allow us to learn a lot about how the ice fractures and moves.”

Brandon also predicts that A-68 will eventually break up and drift north where it will become grounded again and slowly “decay.”