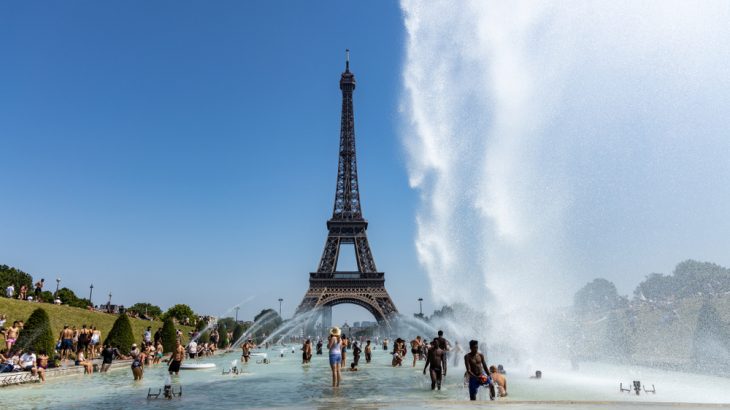 A scorching European heat wave knocked down record after record this past week. Temperatures rose to nearly 110 in Paris, and the UK had to slow its trains to avoid causing tracks to buckle in the heat. All-time heat records were set in Germany, Belgium, the Netherlands and Scotland, and possibly England as well.

The heat isn’t over yet – and it’s moving toward Greenland’s already struggling ice sheet. That could make the thinning ice melt faster, bringing it close to – or even lower than – the record low set seven years ago in 2012.

It’s also expected to affect sea ice in the Arctic, according to the U.N. World Meteorological Organization. The heat may already be linked to an unprecedented number of Arctic wildfires.

The European heat wave has been driven by warm air circulating north from Spain and North Africa, the WMO said.

This month’s heat has followed the hottest June on record, according to the U.S. National Oceanic and Atmospheric Administration. Both the land and the sea temperature averages globally were the highest ever recorded, NOAA reported.

“Such intense and widespread heat waves carry the signature of man-made climate change. This is consistent with the scientific finding showing evidence of more frequent, drawn out and intense heat events as greenhouse gas concentrations lead to a rise in global temperatures,” said Johannes Cullmann, director of the WMO Climate and Water Department.

Greenland’s ice sheet contains more frozen freshwater than anywhere else in the world except for Antarctica. Ice covers about 80% of Greenland’s surface. As that ice melts, it may be contributing to as much as 10% of the Earth’s sea level rise in recent years, researchers said.

“WMO expects that 2019 will be in the five top warmest years on record, and that 2015-2019 is to be the warmest of any equivalent five-year period on record,” Cullmann said in a statement on the WMO website.