Greenland's ice is raising sea levels as it melts • Earth.com 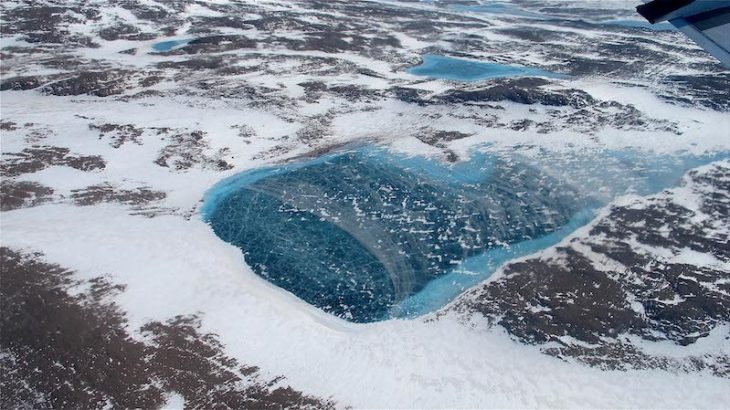 Greenland’s ice is raising sea levels as it melts

Greenland’s ice is looking a little less nice these days – and a lot thinner. Summer arrived early in the Arctic, and the heatwave has sped up melting of the Earth’s second largest ice sheet.

But Greenland was already steadily losing ice over the past couple of decades.

Researchers from the Danish Meteorological Institute, the Technical University of Denmark and the Geological Survey of Denmark and Greenland have been combing over 30 years of satellite data on the height, mass and movement of Greenland’s ice. They found that from 2003 to 2016, an average of 255 gigatonnes of ice have been lost each year. One gigatonne is equal to 1,000 metric tons, or 1,102 U.S. tons.

“The Greenland losses have raised sea level by around half a millimeter each year over the observed period,” said Dr. Ruth Mottram, lead author of the study, which has been published in the journal Remote Sensing.

The team also found that Greenland’s ice is not melting at a steady rate. In fact, the rate of ice loss has increased steadily each year – consistent with ice loss at the North and South Poles.

Unlike melting sea ice, land ice contributes directly to sea level rise as it returns to the ocean.

In some places, the ice sheet thinned by as much as 2 ½ meters. The researchers pointed to rising global surface temperatures and less snowfall as causes for the decreasing ice.

“If an icesheet is to maintain its mass balance, or volume, we would expect to see the height increase at its centre due to snow accumulation. It is striking how this pattern has changed when comparing the early 1990s to the last few years,” Mottram said.

Datasets used in the study came from the European Space Agency’s Copernicus satellites. The researchers used models to analyze the disappearance of Greenland’s ice.

The team says that continued monitoring of ice loss in Greenland is vital. They plan to continue studying the data collected by the ESA.

“With Copernicus Sentinel-1 and -3, we are moving from only being able to take a short snapshot of icesheet flow speeds or calving front changes beginning to be able to monitor the Greenland icesheet remotely, in almost real time,” Mottram said. “We now get consistent, weekly repeat, and with such a richness of data we can more accurately understand how Greenland is responding to a changing environment.”