“Extinctus” wildflower is alive and well, but remains endangered • Earth.com 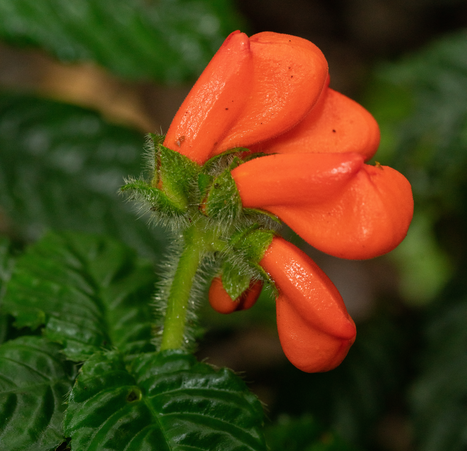 “Extinctus” wildflower is alive and well, but remains endangered

Species of living organisms are often given scientific names that honor famous people, such as the frog Rhinoderma darwinii, or that reflect where the species is found, as in the southern African wild rosemary, Eriocephalus africanus. One particular species of flowering plant, discovered in the foothills of the Andes Mountains in the mid-1980s, was given a name that foretold of its destiny, or so the scientists thought.

Gasteranthus extinctus is a species of tropical wildflower found only in moist montane forests in Ecuador, South America. It belongs to the family Gesneriaceae, along with other species that have showy flowers, such as the African violet. The generic name, Gasteranthus is Greek for “belly flower” – the beautiful, orange flowers have petals that form a small, stomach-shaped lobe with an opening at the top where pollinators, such as hummingbirds, can obtain nectar.

The plant’s specific name, extinctus, was chosen by the scientists when the plant was discovered because they predicted that this new species would be extinct by the time it was officially described and named. Its distribution was limited to moist montane forest along the Centinela Ridge in Ecuador, a region that is notorious among biologists because the cloud forests there were almost completely destroyed by intensive deforestation in the 1980s. The unique plants that inhabited these forests vanished along with their habitat, or so the scientists thought.

In 2000, G. extinctus was officially named and described to science, by which time the cloud forest habitats along the Centinela Ridge had long since been destroyed. The late biologist E. O. Wilson even coined the term “Centinelan extinction” to describe species that went extinct almost overnight as their habitat was destroyed.

Because of the deforestation in the Centinela, few botanists undertook field trips to the area to confirm that this was indeed the case for G. extinctus. Now, in a paper published today in the journal PhytoKeys, researchers report the first confirmed sightings of this beautiful, forest-floor inhabitant in 40 years.

“Extinctus was given its striking name in light of the extensive deforestation in western Ecuador,” says Dawson White, a postdoctoral researcher at Chicago’s Field Museum and co-lead author of the paper. “But if you claim something’s gone, then no one is really going to go out and look for it anymore. There are a lot of important species that are still out there, even though overall, we’re in this age of extinction.”

The story of Centinela also drew attention to the fact that over 97% of the forests in the western half of Ecuador have been felled and converted to farmlands. What remains is a fragmented mosaic of tiny islands of forest within a sea of bananas and a handful of other crops.

“Centinela is a mythical place for tropical botanists,” says Pitman. “But because it was described by the top people in the field, no one really double-checked the science. No one went back to confirm that the forest was gone and those things were extinct.”

Since 2009, a few scientists have undertaken expeditions to look for G. extinctus but they were unsuccessful. When White and Pitman received funding from the Field Museum’s Women’s Board to visit the Centinela Ridge, they jumped at the opportunity and began to plan a research trip. They searched through satellite images of the area, trying to identify patches of primary rainforest that were still intact. They found a few possibilities and then put together a team of ten botanists from six different institutions in Ecuador, the US, and France. In November of 2021, they arrived at Centinela.

“It was my first time planning an expedition where we weren’t sure we’d even enter a forest,” says Pitman. “But as soon as we got on the ground we found remnants of intact cloud forest, and we spotted G. extinctus on the first day, within the first couple hours of searching. We didn’t have a photo to compare it to, we only had images of dried herbarium specimens, a line drawing, and a written description, but we were pretty sure that we’d found it based on its poky little hairs and showy “pot-bellied” flowers.”

Pitman recalls mixed emotions upon the team’s finding the flower. “We were really excited, but really tentative in our excitement – we thought, ‘Was it really that easy?’” he says. “We knew we needed to check with a specialist.”

They sent photographs of the flamboyant orange flowers, to taxonomic expert John Clark and he confirmed that these were indeed the flowers of G. extinctus, which was clearly not so extinct any more. Samples of fallen flowers were taken for the museum collection, and some leaves were collected for DNA analysis. The researchers located many of these rare plants nestling on the forest floor, as they visited other forest fragments along the Centinela.

“We walked into Centinela thinking it was going to break our heart, and instead we ended up falling in love,” says Pitman. “Finding G. extinctus was great, but what we’re even more excited about is finding some spectacular forest in a place where scientists had feared everything was gone.”

The team is now working with Ecuadorian conservationists to protect some of the remaining fragments where G. extinctus and the rest of the spectacular Centinelan flora lives on.

“Rediscovering this flower shows that it’s not too late to turn around even the worst-case biodiversity scenarios, and it shows that there’s value in conserving even the smallest, most degraded areas,” says White. “It’s an important piece of evidence that it’s not too late to be exploring and inventorying plants and animals in the heavily degraded forests of western Ecuador. New species are still being found, and we can still save many things that are on the brink of extinction.”

The name, extinctus, will not be changed, says Pitman; it will remain as a warning that, when habitats are destroyed, the species endemic to those habitats remain rare and endangered, even if they do not end up becoming extinct.

Do wind instruments spread Covid-19?
News coming your way
The biggest news about our planet delivered to you each day