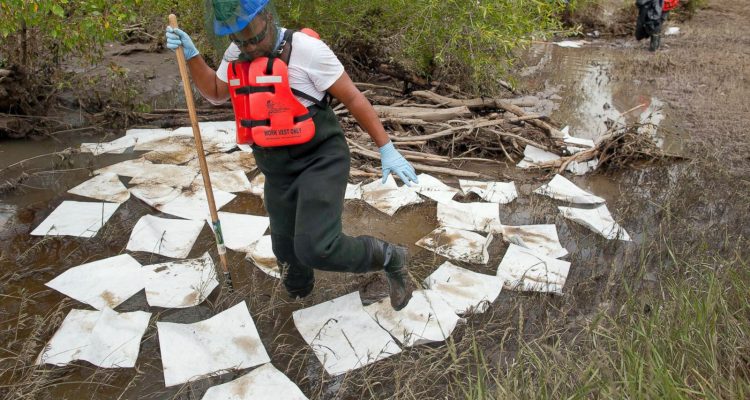 The payment is meant to settle claims from the U.S. and state governments that the crude oil killed fish and wildlife and damaged thousands of acres along an 85-mile (137-kilometer) stretch of the famous river that flows through southern Montana.

Exxon could face further penalties for violations of federal water pollution laws, a matter not addressed in the settlement.

A U.S. Transportation Department investigation found Exxon workers failed to adequately heed warnings that the 20-year-old pipeline was at risk from flooding.

Gov. Steve Bullock, Attorney General Tim Fox and representatives of the U.S. Justice Department announced the $12 million settlement at the site of the pipeline break in Laurel. The Associated Press obtained details in advance.

“We’re going to work to bring the river back to where it would have been but for that spill event.” Cruden said.

Some $4.7 million of the settlement will go to shoreline and channel restoration and improvement, Fox said. Another $3.6 million will be for wildlife habitat restoration, $2.4 million for improving recreational access, $900,000 for restoration planning and $400,000 for improving white pelican breeding areas, he said.

Montana will receive $9.5 million from the settlement, and the federal government will get the remaining $2.5 million.

Company spokeswoman Ashley Smith Alemayehu said in a statement that the settlement is “an adequate resolution to restore, rehabilitate and or replace injured natural resources and services to pre-spill conditions.”

The accident sparked a national discussion over the adequacy of safety rules for thousands of pipelines crossing beneath rivers, lakes and other waterways. Many of those pipelines were installed decades ago in shallow trenches and can be left exposed after floodwaters scour river bottoms.

In the years since the spill – and at the urging of safety regulators – oil and pipeline companies, including Exxon, have re-installed some lines at greater depths to reduce the risk of accidents.

However, there still are no regulatory mandates for lines to be deeply buried. In January 2015, another shallow pipeline broke and spilled 30,000 gallons (113,559 liters) further downstream along the Yellowstone near the town of Glendive.

Penalties against Exxon for possible federal Clean Water Act violations stemming from the 2011 spill have not yet been levied. An investigation by the Environmental Protection Agency continues, agency spokesman Richard Mylott said.

A consent decree detailing terms of Wednesday’s settlement was to be filed in U.S. District Court in Montana. The deal will be finalized pending a 30-day public comment period and court approval.