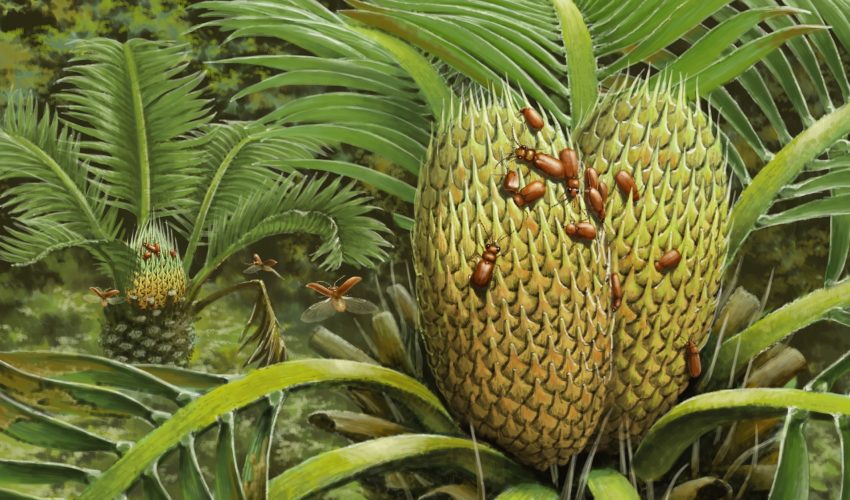 An ancient boganiid beetle that was preserved in amber and dates back 99 million years may have pollinated the first insect-pollinated plant: a type of evergreen called a cycad.

Cycads are examples of gymnosperms which unlike angiosperms, produce unprotected seeds.

A new study conducted by researchers from the Nanjing Institute of Geology and Paleontology uncovered the earliest fossil evidence of a pollinator-plant relationship dating back to the time of the dinosaurs.

The results were published in the journal Current Biology.

A nearly 100 million-year-old boganiid beetle found trapped in Burmese amber was the basis for the study and there were grains of cycad pollen trapped in the amber with the beetle.

Upon closer inspection of the beetle, the researchers also found that the specimen had specially adapted mandibular patches to help transport pollen strengthening the hypothesis that this beetle was an early pollinator.

“Boganiid beetles have been ancient pollinators for cycads since the Age of Cycads and Dinosaurs,” said Chenyang Cai, an author of the study. “Our find indicates a probable ancient origin of beetle pollination of cycads at least in the Early Jurassic, long before angiosperm dominance and the radiation of flowering-plant pollinators, such as bees, later in the Cretaceous.”

Cai analyzed the boganiid beetle and with the aid of a microscope noticed the specimen carried clumps of pollen grains which were confirmed to belong to a cycad.

The distribution of related beetle cycad pollinators supports the idea that the boganiid beetle was an ancient first pollinator of cycads and that cycads were the first insect-pollinated plant.