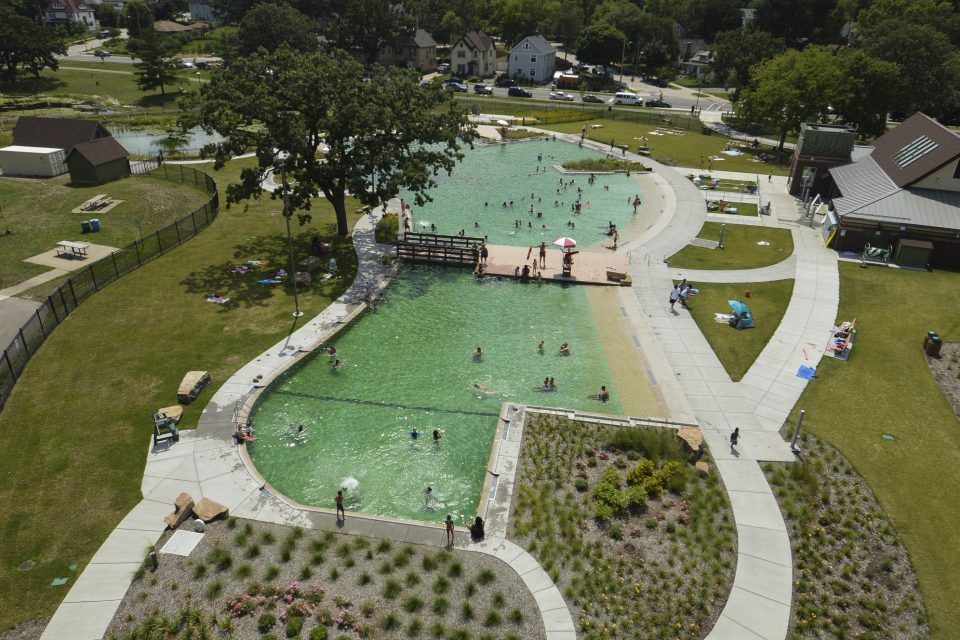 The first ever public natural swimming pool built in North America is located in Minneapolis, Minnesota. Although Webber Park Pool has been open since July 2015, this summer was marked by an unprecedented amount of closures.

A natural pool is one that doesn’t use chemicals like chlorine to keep the water clean and instead uses a natural filtration system.

Much like a river or lake, the pool water is filtered through an outlining pond (a regeneration basin) filled with vegetation. According to Webber Park’s website, around 7,000 aquatic plants are rooted in layers of limestone and granite gravel in the regeneration basin.

As the water is pumped out of the swimming pools, it’s filtered through the plants and gravel before being pumped back into the swimming areas.

All 500,000 gallons of water in Webber Pool is recycled through the regeneration basin every twelve hours. On top of that, the pool is vacuumed daily.

As climate change will continue to put pressure on water resources, finding sustainable solutions to something as seemingly innocuous as the local pool could help reduce carbon emissions and cut down on energy use.

Natural swimming pools, and eco-friendly ways to improve traditional swimming pools, such as solar heating or hydropower to heat and power pool facilities could be important alternatives in the future. Especially given that the regeneration basin provides habitat to local wildlife.

Currently, there are two other NSPs in North America. One is a private pool, but this summer, the second public NSP opened in Edmonton, Alberta Canada. In Europe, you will find over 20,000 public and private NSPs. 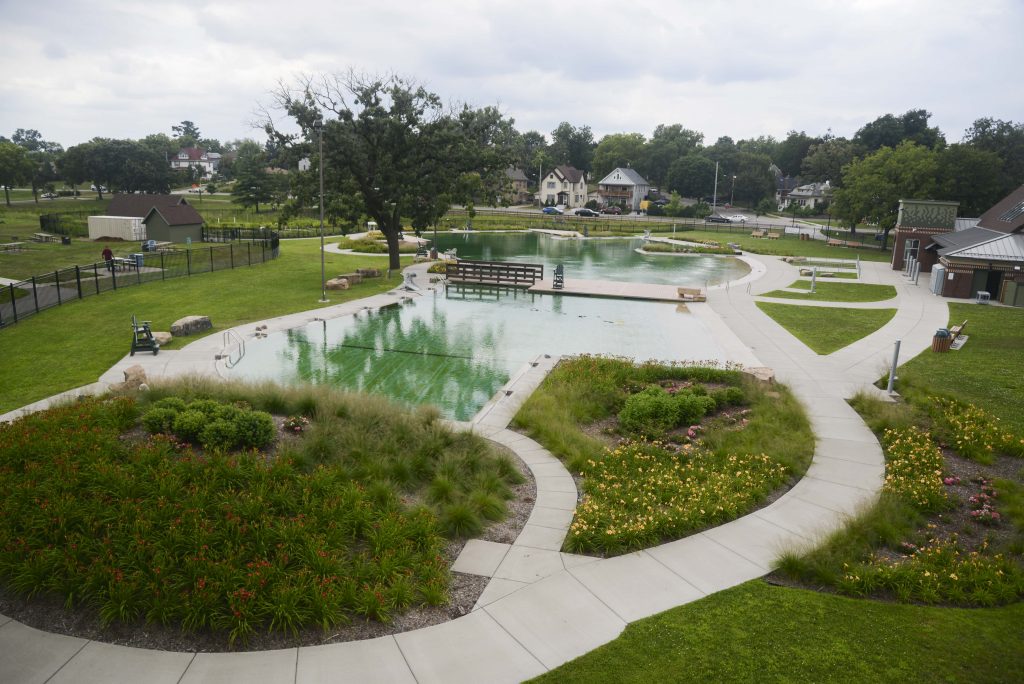 The Webber Park Pool was a massive undertaking, costing upwards of seven million dollars and taking ten years to build.

However, once completed, the pool has been a much loved and much needed addition to its Webber Park location in North Minneapolis.

As far as the decision to build an NSP in its chosen location in Minneapolis in the first place, it really came down to filling a need for the community.

Jon Olson, the former District 2 Commissioner, wanted to bring something special to North Minneapolis after the previous pool in Webber Park had been removed ten years before construction on the NSP began.

Robin Smothers, the social media and media relations manager for the Minneapolis Park and Recreation Board explained to me that the northside (North Minneapolis) has some of the city’s highest concentrations of poverty and many areas are largely underserved.

Now, thanks to the decision to build the pool, Residents of the surrounding neighborhoods have free access to lap lanes, a shallow pool, and an open swim area. It’s well monitored by several lifeguard stations and the water quality is routinely tested.

As someone who lives right down the street from the pool, I can attest to what a popular attraction it is. Rarely is the pool quiet when it’s open, and sometimes they have to close the pool to new traffic lest they exceed the maximum capacity of 500 people. It’s family-friendly, free, and a summer must for nearby residents.

My family frequented the pool often this summer as it was the perfect way to cool off during the hot summer days and provides an outlet for people of all ages and all swimming capabilities.

And yet, this summer saw an influx in closures due to high levels of bacteria and failed water quality tests, more than in previous seasons. Residents were frustrated because the pool was often closed on the hottest days of the season and the park’s managers seemed to offer little consolation that they were working to fix the problem.

This summer saw record-breaking heat waves worldwide and the Twin Cities were not exempt from that. For Minnesota, the summer started as early as May with temperatures reaching 100 degrees Fahrenheit, which has only happened once before in the metro area in May.

There was no shortage of hot days this summer so you can imagine that not having access to resources like Webber Pool, especially one so costly and so long in the making, would be more than aggravating.

So what caused the first NSP in North America to shut down for so many days when so many people were relying on a cool dip in the local pool?

The answer is a little unsavory and has to do with ducks, well more accurately, duck poop. The pool’s failing water quality tests and high levels of bacteria were traced back to fecal matter from ducks frequenting the pool at night.

“They’re becoming more comfortable with this pool, and we’re seeing them here more often than we did last summer,” said Jeremy Barrick of the Minneapolis Parks and Recreation Department in a local ABC Eyewitness News report.

By the end of July 2018, the pool had been closed 24 days over the course of the summer according to the Star Tribune. At one point, the pool was closed more often than it was open due to failed water quality tests.

While the park board and staff implemented several solutions to help deter the ducks such as placing alligator, coyote, and owl decoys, netting, and coyote urine around the pool, there are concerns that the methods simply aren’t enough and that it’s costing too much.

The proposed methods above were estimated to cost less than $8,000 and none are invasive or harmful to the pool or surrounding habitat.

One day, my mother said she had to help with an impromptu duck removal operation as swimmers helped lifeguards shoo away a group of ducks that were trying to get cozy in the open swim area.

Barrick also mentioned that natural filtration systems take five years to mature which makes sense if you think about the natural flora and fauna that grow in lakes and ponds.

The questions that remain are will these deterrents work for 2019’s summer season, or will an increase in summer temperatures and precipitation affect the pool’s ability to keep clean and mature?

To answer these questions, who better to turn to than Webber Pool’s Water Quality Supervisor, Rachael Crabb.

According to an Environmental Protection Agency publication, as climate change continues it will mean warmer days, increases in precipitation and heavy rainfall, and storms are projected to get more intense for the state of Minnesota. Crabb explained that while heavy rainfall doesn’t affect the pool, a 2016 flood event did disrupt the pool’s water quality because there was just too much overflow.

A flood wall was built in response and now, in the event of future heavy flooding, stormwater overflow will be guided to the pond on the north side of the pool and will be able to protect the Webber Pool Facility up to a one in a 50 year flood event, according to Crabb.

In regards to the event of hotter summers and longer heatwaves, Crabb explained that these events are not a problem for Europe’s NSP’s and there are natural pools in much hotter regions in Italy and Spain compared to Minneapolis.

Luckily, hot weather should not impact Webber Pool but Crabb did say that if water temperatures exceed certain standards, the park board will test the water quality more often.

For me personally, I love living so close to such an awesome resource and innovative project, right in Minnesota’s backyard. I would rather swim in a lake over chlorine any day, but driving out to one of Minnesota’s ten thousand lakes isn’t always an option.

I’m hopeful that the natural filtration system will eventually work up to its full potential and as evidenced from my inquiries to the park’s staff, the Minneapolis Park and Recreation Board are working hard to ensure the pool’s success. .