This flower pretends to be a mushroom to attract insects • Earth.com 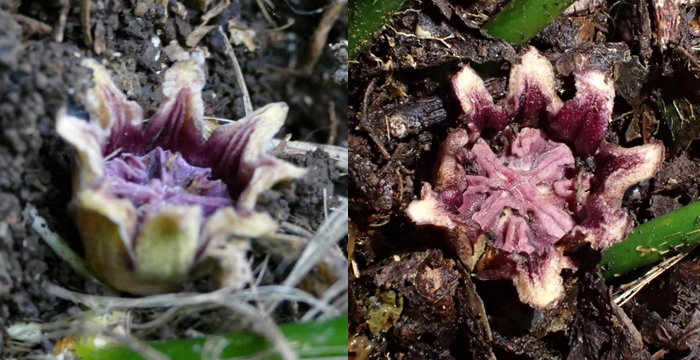 This flower pretends to be a mushroom to attract insects

Aspidistra elatior is a popular houseplant nicknamed the “cast iron plant” for its resilience. Its unique pollination ecology was not understood until recently, when scientists discovered that this flowering plant is primarily pollinated by fungus gnats, which is likely due to the fact that it intentionally resembles a mushroom.

Prior to this analysis, experts thought that the flowers of A. elatior were pollinated in the most unusual way, by slugs and amphipods. Closer observation revealed this was not the case. Senior researcher Sueyoshi Masahiro of the Forest Zoology Group teamed up with Professor Suetsugu Kenji of Kobe University for the study.

Native to southern Japanese islands, A. elatior is characterized by purple, fleshy flowers which bloom directly above the soil, almost burrowing into the ground and often hidden by leaves. The researchers believe the oddly-shaped flowers of A. elatior are likely a strategy to mimic mushrooms in order to trick fungus gnats into pollinating them.

While many plants rely on pollinating insects that fly, some plants use animals for pollination. For example, there are species of bananas that are pollinated by bats.

Documentation that slugs pollinate A. elatior dates back 100 years, when slugs were observed visiting plants in Europe. Despite the fact that this theory is still widely accepted and reported in textbooks, the observation was not made in the plant’s natural habitat. In addition, slugs have been known to visit plants for reasons other than pollination such as eating leaves and flowers.

In 2009, it was claimed that fungus gnats were visiting A. elatior flowers. However, this observation was also made outside the plant’s native habitat and was only a single report that did not provide enough evidence. The research team took a new approach for their study.

“For two years we observed the animals that visited these flowers in their native habitat, continuously, day and night,” said the study authors. “We discovered that no slugs visited, and hardly any beach fleas. The candidate that emerged as an effective pollinator was the fungus gnat. Fungus gnats that visited the plants quickly dived into the center of the flowers, attached a large amount of pollen to their bodies, and flew away.”

The team also witnessed fungus gnats carrying pollen to A. elatior flowers from other flowers, and noted that the flowers they visited produced fruit. Therefore, the research team established that fungus gnats were the true pollinators of A. elatior.

“We believe that the similar appearance of A. elatior and mushroom fruit bodies may help attract fungus gnats,” said Professor Suetsugu. “In addition, A. elatior emits a strong musty odor. Therefore, the fungus gnats may be deceived by both visual and chemical mimicry.”

The findings of the study are published in the online edition of Ecology.