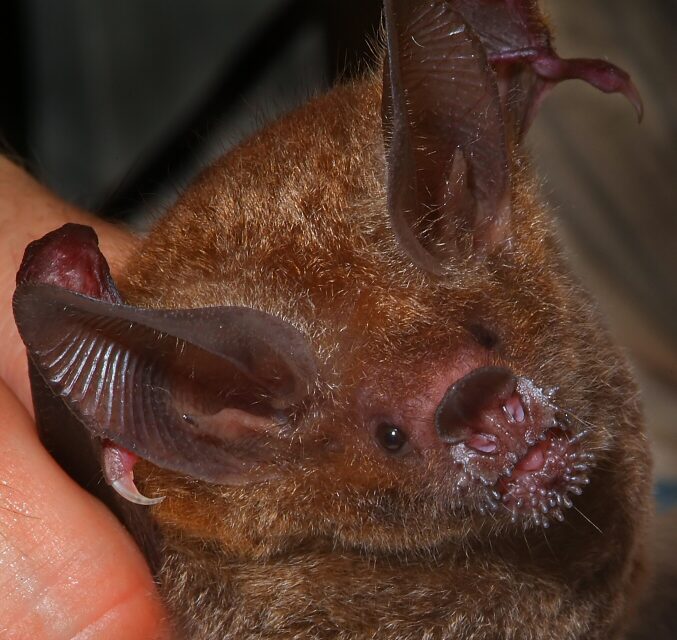 Frog-eating bats have a long-term memory

A team of researchers led by the Ohio State University (OSU) has found that frog-eating bats trained by scientists to associate a phone ringtone with a tasty food reward were able to remember what they learned for up to four years in the wild. While many previous studies have documented long-term memory in a wide range of animals living in captivity – including sea lions, tortoises, dolphins, birds, and primates – this is one of the first attempts to investigate how memory functions in animals living in the wild.

“Being able to study memory in the wild is important,” said study co-author Gerald Carter, an assistant professor of Evolution, Ecology, and Organismal Biology at OSU. “You can’t necessarily extrapolate from the wealth of data we have on animals in the lab to what they’re facing in the wild, where there are many more things they have to remember. The environment is different and the brain is different in the wild versus captivity.”

The scientists acquainted 49 bats with a series of phone ringtones which attracted their attention, and trained them to associate flying toward just one of these tones with receiving a baitfish reward. Afterwards, all bats were microchipped and returned to the wild. Between one and four years later, eight of these bats were recaptured and exposed again to the reward-related ringtone. While all of them flew toward the sound, six flew all the way to the speaker and immediately grabbed the reward, suggesting that they expected to find food when primed with the familiar ringtone. By contrast, control bats without previous training to recognize the tones, mostly twitched their ears in response to the sounds, but did not fly toward their source.

“I was surprised – I went into this thinking that at least a year would be a reasonable time for them to remember, given all the other things they need to know and given that long-term memory does have real costs. Four years strikes me as a long time to hold on to a sound that you might never hear again,” said study lead author May Dixon, a postdoctoral researcher in Evolution, Ecology, and Organismal Biology at OSU.

“The study taught us a lot because there are relatively few studies of long-term memory in wild animals and we don’t have systematic understanding of long-term memories in nature yet. If we can collect additional data on different species of bats, we could pick this apart and see what life histories select for long memories.”

Since previous studies have shown that, in other animal species such as the fruit fly, long-term memory is actually detrimental, further research is needed to clarify whether these skills are an asset or a liability for wild frog-eating bats.