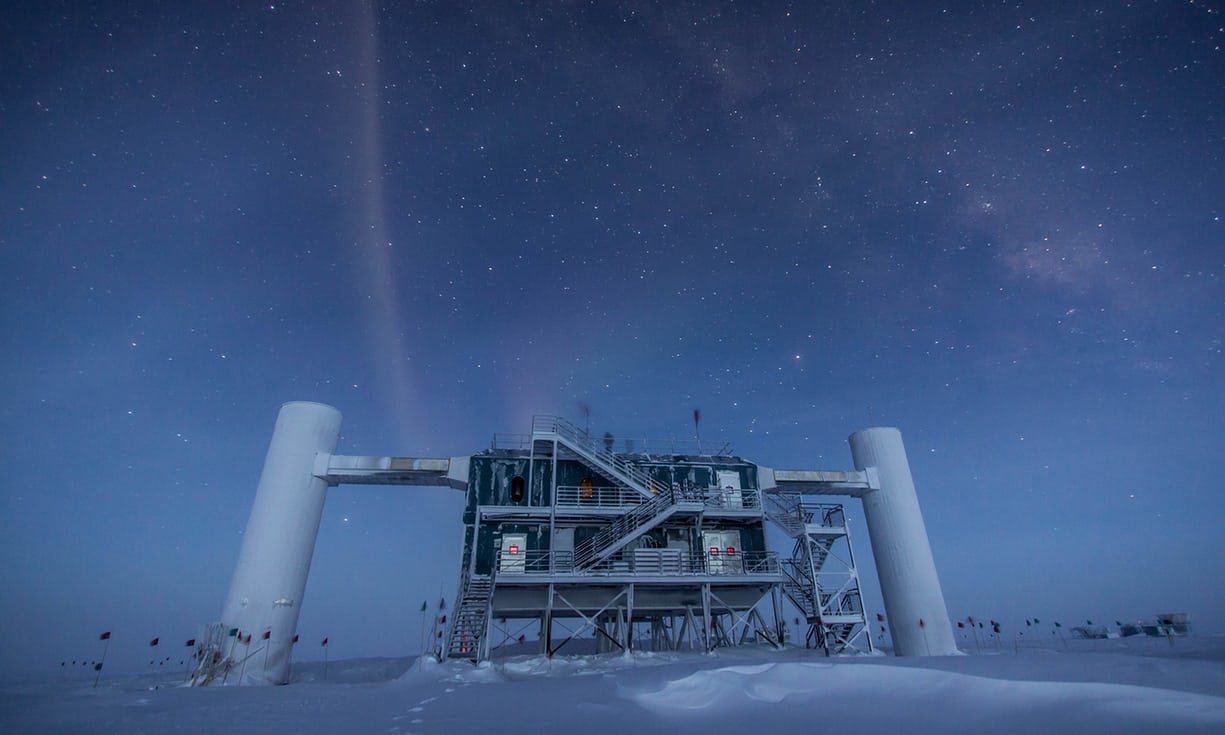 Ghost particle arrived on Earth from 3.7 billion light years away

The analysis of a neutrino, also known as a ghost particle, that blasted into Antarctic ice last year has just opened up an entirely new approach to space exploration. NASA’s Fermi Gamma-ray Space Telescope has traced the origin of the mysterious particle to a galaxy 3.7 billion light years away.

Neutrinos are named for being electrically neutral and also for their incredibly small mass, which was long believed to be zero. On the subatomic scale, the gravity of a neutrino is extremely weak and these particles normally pass through matter completely undetected at nearly the speed of light.

The presence of this particular neutrino was detected last September by IceCube, a sensor buried about two kilometers beneath the ice near the Amundsen-Scott South Pole Station.

The tremendous force behind the particle as it hit the ice indicated that it came from beyond our solar system. The neutrino struck the ice with the energy of about 300 trillion electron volts, according to NASA, which is more than 45 times the energy that is generated by the most powerful particle accelerator on Earth.

Because cosmic rays are charged particles, powerful magnetic fields throughout space distort their trajectories. Neutrinos, on the other hand, have no charge and are unaffected by magnetic fields, which means their paths point almost directly to their source.

Once the trajectory of the neutrino was identified by IceCube, experts all over the world were alerted to look for flares or other outbursts in an effort to find its source. Ultimately, data from Fermi’s Large Area Telescope recognized accelerated gamma-ray emission that correlated with the rare neutrino interaction.

The activity was coming from a type of galaxy known as a “blazar,” which has a supermassive black hole that blasts out streams of highly energetic particles in opposite directions. The term blazar is used when one of these streams is pointed directly toward the Earth.

“Fermi’s LAT monitors the entire sky in gamma rays and keeps tabs on the activity of some 2,000 blazars, yet TXS 0506 really stood out,” explained NASA Postdoctoral Fellow Sara Buson. “This blazar is located near the center of the sky position determined by IceCube and, at the time of the neutrino detection, was the most active Fermi had seen it in a decade.”

The blazar known as TXS 0506 is around 3.7 billion light years from Earth, just to the left of the constellation Orion.

This is the first time scientists have ever detected a neutrino and identified its source. Detecting neutrinos, which are some of the most abundant substances on the planet, will provide scientists with a brand new way to explore the complex processes that are taking place in other galaxies billions of light years away.

Julian Osborne is a professor in the Department of Physics & Astronomy at the University of Leicester and was part of a team that confirmed the blazar.

“This is literally a new way of seeing the universe,” Professor Osborne told The Guardian. “This really is the dawn of a new type of astronomy.”

The research is published in two separate papers in the journal Science.