A rare look at a ghostly octopus off the coast of California • Earth.com 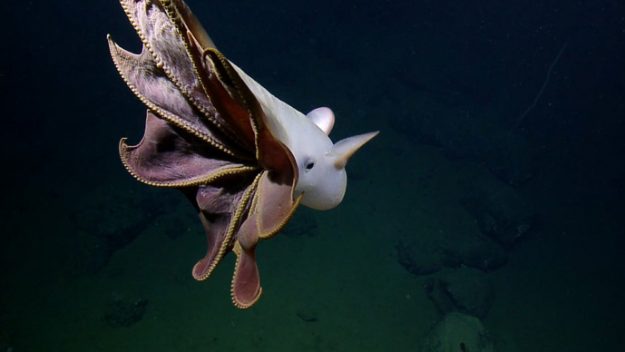 Researchers have captured a rare sighting of a “ghostly” octopus gliding through the deep ocean waters off the coast of California. Using a remotely operated vehicle (ROV), the experts spotted the white cephalopod near the Davidson Seamount in Monterey Bay National Marine Sanctuary.

The octopus is known as a dumbo, or an umbrella octopus, with wing-like fins and a “web” that fans out like an umbrella. The rarely-seen sea creature, which was caught on video by the Exploration Vessel (E/V) Nautilus team, looks like a cartoon apparition drifting across the dark sea.

The cephalopod was spotted during the first of a series of dives at the Davidson Seamount, when the ROV was deployed to examine an unexplored “oasis” that features fields of coral and sponge. The experts estimate that the octopus was about two feet in length.

“At first the ghostly octopod drifted past the camera on ROV Hercules flapping its pair of wing-like fins, then it inverted its web, spreading it like an umbrella to reveal the eight arms each with a single series of suckers and two series of finger-like muscular structures called cirri,” said the researchers.

The team is exploring an area near the Davidson Seamount, which is located 80 miles southwest of Monterey and 75 miles west of San Simeon, that stretches from 3,100 to 3,600 meters deep. The goal of the study is to document the presence of deep-sea life and to collect water and sediment samples.

According to E/V Nautilus: “Davidson Seamount is an inactive volcanic undersea mountain habitat off the coast of central California, and is considered to be an area of special national significance. One of the largest known seamounts in U.S. waters, the seamount has been called ‘an oasis in the deep’ in an otherwise flat seafloor, hosting large coral forests, vast sponge fields, crabs, deep-sea fishes, shrimp, basket stars, and high numbers of rare and unidentified benthic species.”