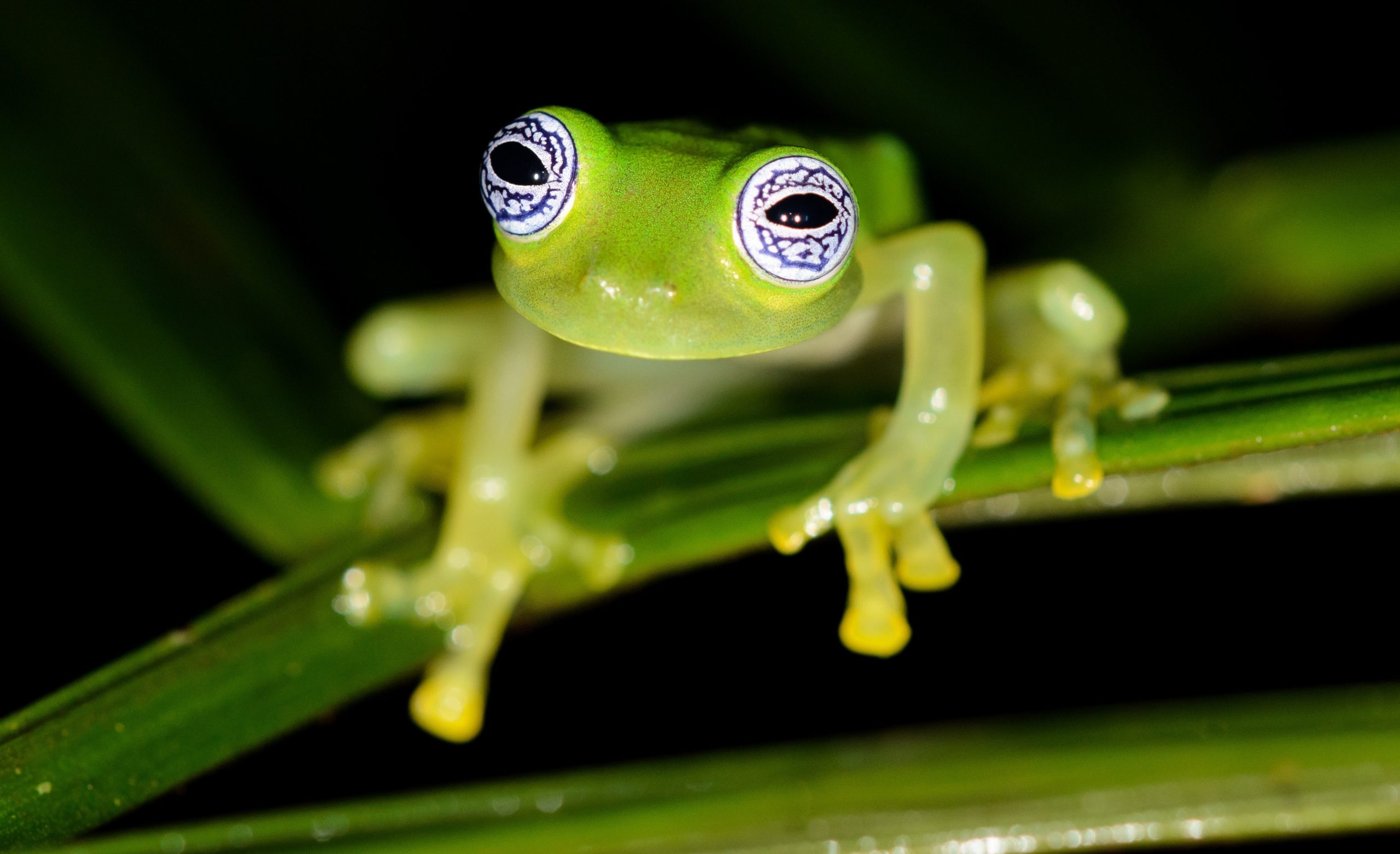 Glass frogs wave their hands and feet to attract mates. Some frog species have found ways to overcome the obstacle of loud rushing water that can drown out their mating calls. Frogs that live near roaring waterfalls and streams attempt to attract mates by waving a foot, flapping a hand, or bobbing their head.

Frogs who use visual signals have been documented near rushing streams in the rainforests of India, Borneo, and Brazil. In an exciting new study from UC Berkeley, PhD candidate Rebecca Brunner has discovered the same “dancing” behavior among glass frogs in Ecuador.

The study marks the first time that a glass frog has been known to use visual cues for communication in response to the acoustic environment.

“A handful of other frog species around the world use visual signaling, in addition to high-pitched calls, to communicate in really loud environments,” said Brunner. “What’s interesting is that these species are not closely related to each other, which means that these behaviors likely evolved independently, but in response to similar environments – a concept called convergent evolution.”

Sachatamia orejuela glass frogs are native to the rainforests of Ecuador and Colombia. These frogs are almost exclusively found on rocks within the spray zones of waterfalls, where they become nearly invisible to predators.

Brunner was conducting fieldwork in an Ecuadorean rainforest stream recording the call of a Sachatamia orejuela glass frog when she first observed the visual cues. She noticed the frog was repeatedly raising its front and back legs.

“I was already over the moon because I had finally found a calling male after months of searching. Before our publication, there was no official record of this species’ call, and basic information like that is really important for conservation,” said Brunner. “But then I saw it start doing these little waves, and I knew that I was observing something even more special.”

Balancing herself on a slippery rock, Brunner caught the phenomenon on film. As she recorded, the frog continued to wave its hands and feet and bob its head. A few meters away, Brunner discovered another male Sachatamia orejuela using the same cues.

“This is a really exhilarating discovery because it’s a perfect example of how an environment’s soundscape can influence the species that live there,” said Brunner.

“We’ve found that Sachatamia orejuela has an extremely high-pitched call, which helps it communicate above the lower-pitched white noise of waterfalls. And then to discover that it also waves its hands and feet to increase its chances of being noticed – that’s a behavior I’ve always loved reading about in textbooks, so it is beyond thrilling to be able to share another amazing example with the world.”

Brunner hopes to return to Ecuador soon to continue her research, which is focused on the bioacoustics of various ecosystems and conservation.

“One of the best things about fieldwork is that nature is always full of surprises – you never know what discoveries you may happen upon. I hope our findings can serve as a reminder that we share this planet with incredible biodiversity. Conserving ecosystems that support species like Sachatamia orejuela is important not only for our well-being, but also for our sense of wonder.”

The study is published in the journal Behaviour.