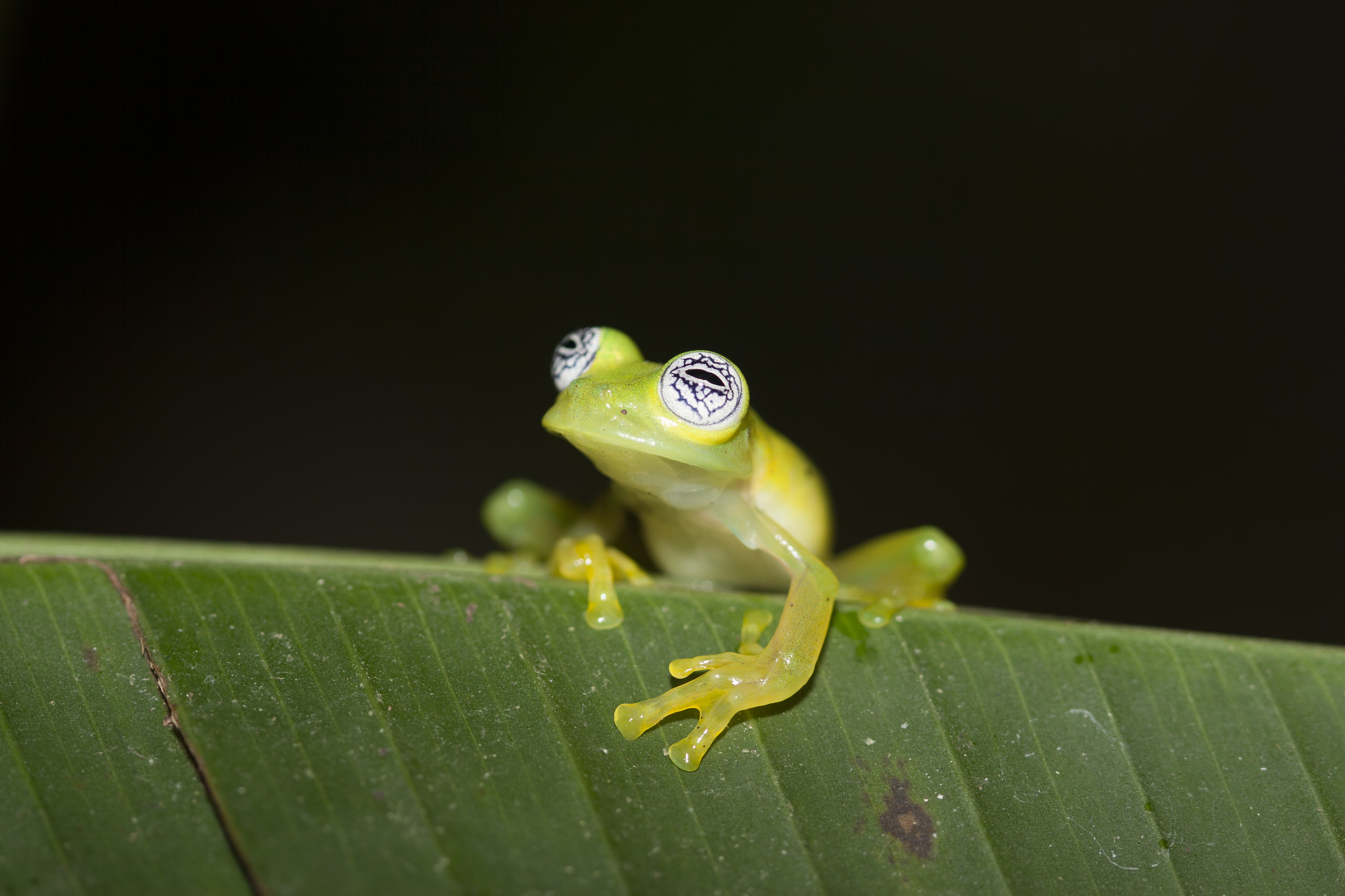 Glassfrog eggs are almost always laid on the tops of leaves overhanging streams – leaving them in peril of being an easy snack for snakes, insects, and other predators, until they hatch and fall into a stream to develop as tadpoles.

It was believed that in just a few species, the fathers would care for the developing embryos during this stage. But biologists thought that most glassfrog species left their eggs alone as they developed.

That was until Jesse Delia, a PhD student in Karen Warkentin’s lab at Boston University, was walking by a stream in Panama very late one night. Along the stream, Delia noticed something unique: a glassfrog mother sitting on her clutch of eggs.

Delia teamed up with research partner Laura Bravo Valencia, a graduate student at Universidad de los Andes in Bogotá, Colombia. They would both go on to observe the parental behavior of more than 40 species of glassfrogs over an 18-month period.

During this time, they noticed that many species of glassfrog mothers brood their eggs the night the eggs are fertilized – which was found to ultimately improve the survival of these eggs. Furthermore, almost a third of glassfrog species’ fathers guard the eggs for much longer periods.

Overall, the researchers found parental care in every glassfrog species they studied. Their findings came after “a tour de force of extreme fieldwork,” according to Warkentin. This “tour de force” involved observation through six rain seasons at 22 sites along streams in Colombia, Ecuador, Mexico, Panama, and Peru.

“In Colombia, we would take buses (La Chiva) into the mountains and try to find somebody who would put us up, somewhere close to a forest, a couple hours’ hike into the stream,” explains Delia. But that was just the first leg of their journey, as “streams in the Andes are really steep, with impassable waterfalls every so often, and in many sites they are cascades of freezing cold water.”

Nevertheless, the two scientists braved the conditions and began their study by removing glassfrog mothers immediately after their eggs were fertilized. They then monitored the eggs daily until they hatched – a time period of about 20 days. In the end, it was found that the eggs that received maternal care survived significantly better than those that did not.

They discovered that the key to this difference was that the mother frogs were soaking up water from damp spots on leaves and delivering this water to their eggs. The added water would cause the jelly layer around the eggs to swell up and become about four times thicker. When insect predators would attempt to eat these eggs, they would eventually become frustrated by the amount of gelatinous goo surrounding the embryo, and would often give up.

Delia and Bravo Valencia also tested the amount of disturbance it would take to make a glassfrog mother leave her eggs during the time following fertilization. Warktentin explained, “They would gently poke and pinch and then physically push her off the eggs, and it would take all that to get most moms to leave.” Not only are these mothers present, but they’re determined as well.

Ultimately, the study showed that the maternal care of glassfrog embryos helps them survive. Surprisingly, it also found that fathers would provide the most care, even after the eggs started hatching. This maternal vs. paternal relationship is relatively uncommon in the animal kingdom, and was of great interest to the research team.

Delia elaborates: “…the way we had underestimated the diversity of parental behavior stresses the importance of getting out to the field and watching animals behave.”

More information on this study can be found in the Journal of Evolutionary Biology.