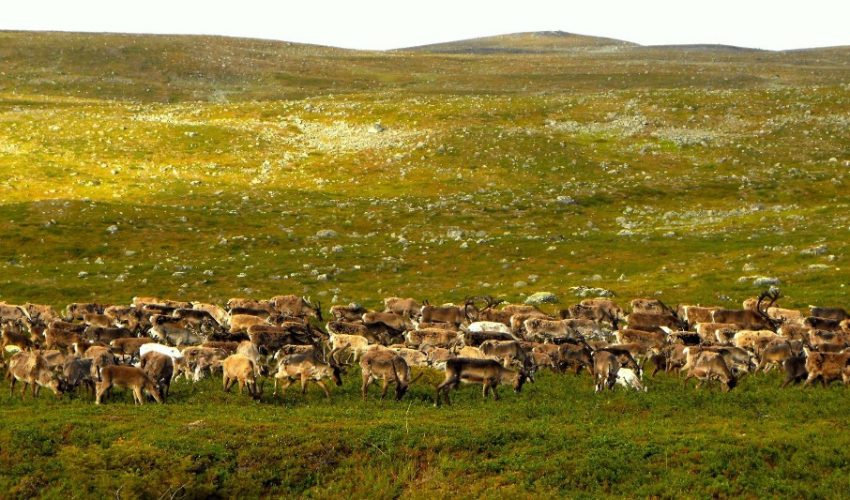 As the tundra gets warmer and plants adapted for its harsh, cold environment struggle to survive, grazing reindeer and other animals may actually help protect them.

So says a new study from Umeå University in Sweden, where researchers visited tundra meadows with grazing herds and small, plant-eating animals like voles and lemmings, then looked at meadows without these animals.

“We found that the warming increased the number of species in plots that were grazed, because it enabled small tundra plants to appear and grow there. But when we fenced reindeer, voles and lemmings out, vegetation became denser and the light was limited. As a result, many small and slowly-growing plant species were lost,” said Dr. Elina Kaarlejärvi, the study leader.

The grazing reindeer and their other herbivorous cohorts ate tall, wide-leaved species that blocked sunlight from other plants growing in the meadows. The result was actually a healthier, more diverse range of plant life in the unfenced meadows.

Earlier studies assumed that plant species would die out and diversity would wither in the tundra due to warming. However, the voles, lemmings and reindeer seem to counteract that, allowing small and slow-growing species to have an equal opportunity at survival.

“By eating tall and wide-leaved plants, reindeer can increase light availability and thus allow more plant species to co-exist and benefit from warmer conditions,” Kaarlejärvi said in a press release.

The scientists conducted their research in Kilpisjärvi in northwest Finland. They monitored which plants appeared, flourished, waned or disappeared in both fenced and unfenced meadow plots. They added nutrients to some plots by way of fertilization.

They also constructed small greenhouses in some locations that increased summer temperatures by 1 to 2 degrees Celsius, to see how a further rise in temperatures might affect the tundra.

The study will be published in the journal Nature Communications.