Green turtles to become up to 93 percent female as temperatures rise • Earth.com 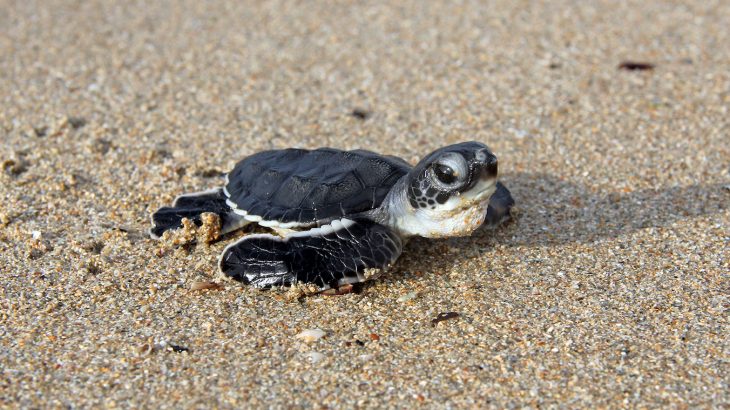 Researchers at the University of Exeter are warning that up to 93 percent of green turtle hatchlings could be born female by the end of this century, as global warming continues to accelerate the feminization of the species.

After sea turtles eggs are buried in the sand, the external temperatures they are exposed to while developing determine whether the turtles will be born male or female. Currently, 52 percent of the green turtles are female when they hatch.

The new study, which also involved experts from the Marine and Environmental Sciences Centre, has found that the warmer temperatures predicted by the Intergovernmental Panel on Climate Change (IPCC) will cause 76-93 percent of green turtle hatchlings to be born as females.

The investigation was focused on a site in Guinea-Bissau, West Africa, but the researchers expect that this shift will occur on a global scale.

According to the experts, the changing gender ratio will initially lead to more females nesting and increase the population. However, this boost will be followed by a dramatic decline “as incubation temperatures approach lethal levels.”

The researchers also predict that rising sea levels will submerge 33-43 percent of the nesting areas that are currently used by green turtles on the beaches of Guinea-Bissau.

“Green turtles are facing trouble in the future due to loss of habitats and increasing temperatures,” said Dr. Rita Patricio. “Our results suggest the nesting population of green turtles the Bijagós Archipelago, Guinea-Bissau, will cope with the effects of climate change until 2100.”

“Cooler temperatures, both at the end of the nesting season and in shaded areas, will guarantee some hatchlings are male. Although rising temperatures will lead to more female hatchlings – and 32-64% more nesting females by 2120 – mortality in eggs will also be higher in these warmer conditions.”

“As temperatures continue to rise, it may become impossible for unhatched turtles to survive.”

Experts at the Institute of Biodiversity and Protected Areas of Guinea-Bissau also contributed to the research. The team explained that nesting sites submerged by rising seas may not simply “move” inland.

“Beach retreat may be OK in some areas, but the turtles we studied were nesting on a small island (Poilão Island) so there is a limit to how far the beach can go,” said Dr. Patricio.

“In other places there may be natural barriers or human constructions that stop beaches moving inland.”