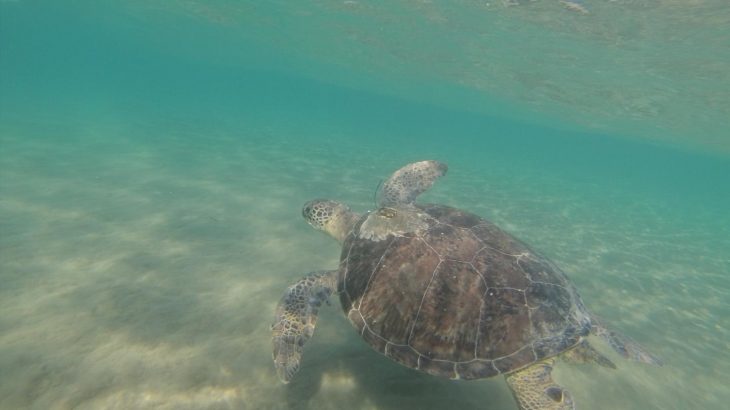 Green turtles eat more plastic when it looks like food

To anyone who’s seen study after study of pollution’s effects on turtles in recent years, it’s no surprise that the shelled reptiles eat dangerous amounts of plastic. But a new study of green turtles found that they’re much more likely to ingest trash when it looks like their food.

For example, the species eats more plastic when it comes in greens, browns and other natural colors, a team of scientists from the University of Exeter and the Cyprus-based Society for the Protection of Turtles found.

The scientists examined the digestive systems of 34 green turtles washed up on Cyprus’ beaches. All of the turtles whose entire digestive tracts could be examined – 19 of them – had plastics in their guts, with one specimen alone having 183 fragments of the material.

“Previous research has suggested leatherback turtles eat plastic that resembles their jellyfish prey, and we wanted to know whether a similar thing might be happening with green turtles,” Dr. Emily Duncan of the University of Exeter said in a press release. “Sea turtles are primarily visual predators – able to choose foods by size and shape – and in this study we found strong evidence that green turtles favour plastic of certain sizes, shapes and colours. Compared to a baseline of plastic debris on beaches, the plastic we found in these turtles suggests they favour threads and sheets that are black, clear or green.”

The study found smaller turtles often had eaten more plastic, though it was uncertain whether that was due to lack of experience or a change in dietary preferences as green turtles age.

“Research like this helps us understand what sea turtles are eating, and whether certain kinds of plastic are being ingested more than others,” said Dr. Brendan Godley of Exeter. “It’s important to know what kinds of plastic might be a particular problem, as well as highlighting issues that can help motivate people to continue to work on reducing overall plastic consumption and pollution.”

Previous research has found that microplastics pose a major threat to sea turtles, and is four times more deadly for young sea turtles than adults.

The new study has been published in the journal Scientific Reports. Funding was provided by Sea Life Trust and the European Union.