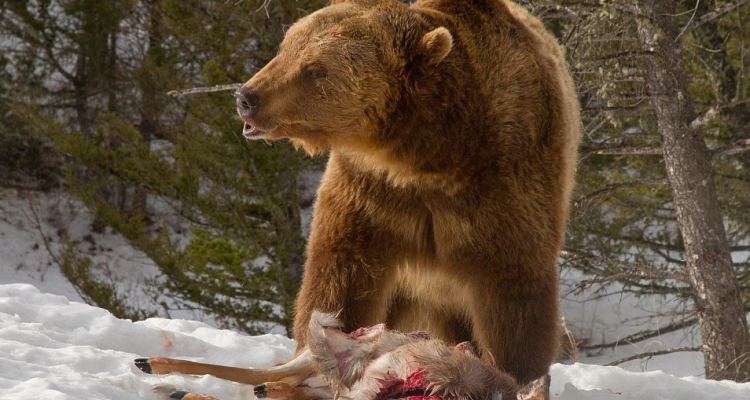 Ever wonder how Leonardo DiCaprio’s character in The Revenant would have fared during that grizzly bear attack if he had been able to transform into a pack of wolves? Thanks to spectacular photographs from British vacationer Tom Littlejohns, you can almost picture it.

On a snow covered hilltop in the Rocky Mountains of Montana, a lone deer nibbles on the foliage of an evergreen. Deer are browsers, feeding primarily on young leaves and soft twigs.

The serenity of the scene swiftly gives way to violence as a pack three wolves ambush the deer, cornering her on a clearing near the edge of a cliff. She tries to run back into the thicket of the woods, but they have her surrounded. There is no escape.

Moments later, the three wolves feed greedily on the carcass of the deer.

Thanks to expanding human populations, North American gray wolves had almost disappeared from the continental United States by the 1940s. However, a program based in central Idaho and Yellowstone Park proved successful in reintroducing the species to regions in northern Minnesota, northern Wisconsin, northern Oregon, Washington, Idaho, Michigan’s Upper Peninsula, and Montana.

One of them moves too close to the deer leg in another’s mouth on and a brawl ensues. Noise from the fight and the smell of the deer’s fresh blood attract the attention of a six and a half foot long grizzly bear.

The wolf not involved in the tussle turns and moves to pounce on the would-be plunderer. But she quickly discovers she is no match for the lumbering giant and runs off to hide the woods.

The other two wolves move in to defend their food, but even at their most ferocious, the wolves cannot match the grizzly’s size and strength. The bear chases the wolves away and enjoys the fresh deer dinner.

All that is to say Leonardo’s character would have still lost. 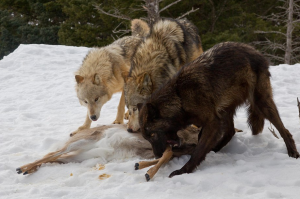 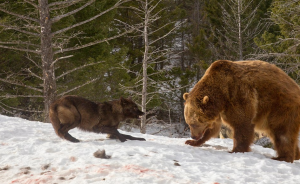 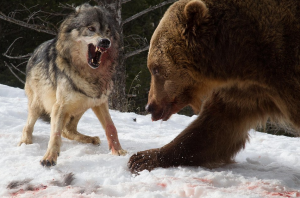 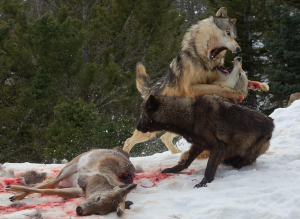 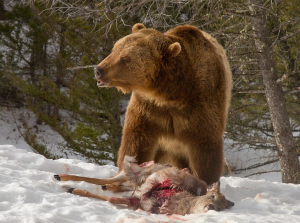