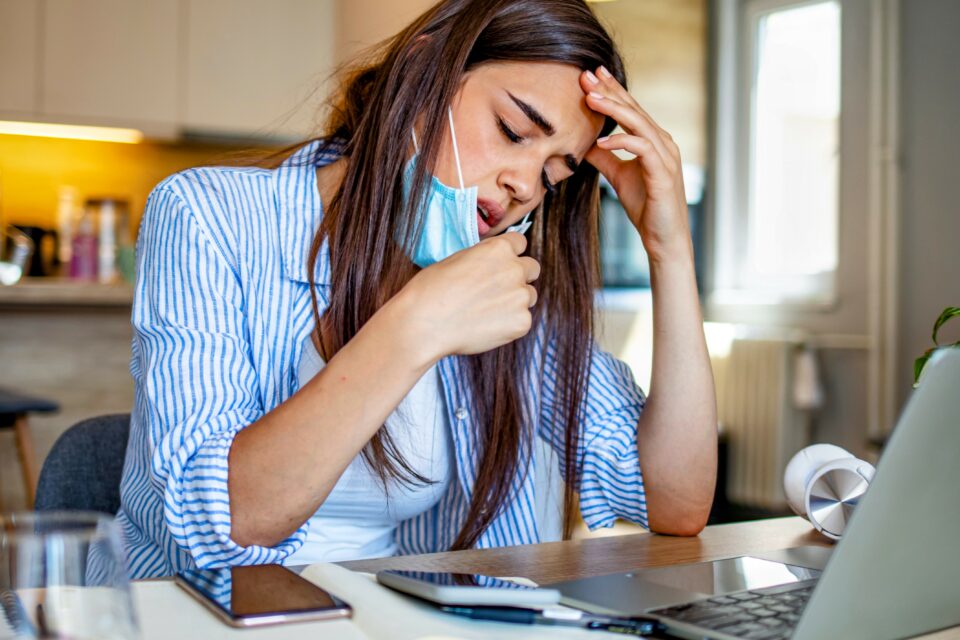 It is not uncommon for people to develop symptoms of ‘long COVID’ after recovering from SARS-CoV-2 infection. Also known as PACS (post-acute COVID-19 syndrome), this condition is familiar to scientists and medical practitioners by now, with as many as 3 out of 4 people presenting with at least one lingering symptom in the weeks and months after initial infection.

The most common symptoms of PACS include fatigue, muscle weakness and sleep disturbance – but the potential causes of these symptoms are unknown. Some suggestions include an exaggerated immune system response, cell damage, or the physiological consequences of a critical illness, all of which may contribute to the development of long COVID. Furthermore, scientists do not yet understand why some people suffer persistent symptoms after clearing the initial infection whereas others do not.

In a new study published in the BMJ journal Gut, researchers from the Chinese University of Hong Kong propose that the human gut microbiome may play a role in the development of long COVID. They set out to analyze which bacteria, fungi and other microbes are present in the intestines of people who have not had COVID, those who have had COVID, and those who have developed PACS.

There is evidence that gut microbes are important in the development and maintenance of major components of a person’s innate and adaptive immune system, and that imbalances in the populations of different gut microbes can contribute to auto-immune diseases and other illnesses. Given this evidence, it is possible that a disordered immune response to COVID-19 infection, induced by resident microbes, may affect the recovery process as well.

The researchers analyzed the gut microbiomes of 106 patients who had been admitted to one of three different hospitals in Hong Kong between February and August 2020. These patients had all tested positive for SARS-CoV-2 virus and subsequently developed varying levels of COVID symptoms.

For comparison, the gut microbiomes of a further 68 people, none of whom had COVID, were also analyzed. These non-COVID controls were recruited before the start of the pandemic (between September 2019 and November 2019) from the volunteer patients at the endoscopy center at the Prince of Wales Hospital. Stool samples were collected before these subjects underwent a normal colonoscopy.

The researchers also checked all participants for the presence of the 30 most common long COVID symptoms, one, three, six and nine months after admission to hospital. Their aerobic capacity and endurance, an indicator of long COVID, was also measured in a 6-minute distance walk test.

Of the patients diagnosed with COVID, 86 (81 percent) of them had symptoms of PACS three months later, and 81 (76.5 percent) after six months. The most common symptoms reported at 6 months were fatigue (31 percent), poor memory (28 percent), hair loss (22 percent), anxiety (21 percent) and sleep disturbances (21 percent).

There were no significant differences in potentially influential factors, such as age, gender, prevalence of underlying conditions, use of antibiotics or antiviral drugs, or COVID-19 severity between patients with and without long COVID, six months after initial infection.

However, there were significant differences in the gut microbe populations found in those who developed PACS, and those who did not. While the microbiota were similar for people who did not develop PACS and those in the control group, those who suffered from long COVID had a less diverse and abundant community of gut microbes.

In particular, patients with long COVID had reduced populations of 28 different species of microbes, including the ‘friendly’ Faecalibacterium prausnitzii, and Blautia obeum. These species are associated with anti-inflammatory effects. In addition, these patients also had increased numbers of 14 other ‘unfriendly’ gut bacterial species, such as Ruminococcus gnavus and Bacteroides vulgatus, both of which are associated with inflammation.

Interestingly, this dysbiosis (unbalance between gut microbe populations) was present at the time of admission to hospital, and it did not improve, even after six months. In contrast, patients who did not develop PACS had only 25 changes in bacterial species at the time of hospital admission, and this recovered completely after 6 months such that their gut microbes were similar to those of people who had not had COVID.

Similarly, several ‘unfriendly’ bacterial species were associated with poorer performance on the 6-minute walk test among those with long COVID.

Overall, the study found that, at the time of hospital admission, the diversity and richness of gut bacteria in patients who subsequently developed long COVID was significantly lower than that of patients who didn’t, suggesting that particular gut microbial profiles may indicate heightened susceptibility, say the researchers.

“In summary, altered gut microbiome composition is strongly associated with persistent symptoms in patients with COVID-19 up to six months after clearance of the SARS-CoV-2 virus.”

The study authors propose that gut profiling may even help to identify people who are more vulnerable to developing serious long-term symptoms after having COVID.

“Considering the millions of people infected during the ongoing pandemic, our findings are a strong impetus for consideration of microbiota modulation to facilitate timely recovery and reduce the burden of post-acute COVID-19 syndrome,” concluded the researchers.