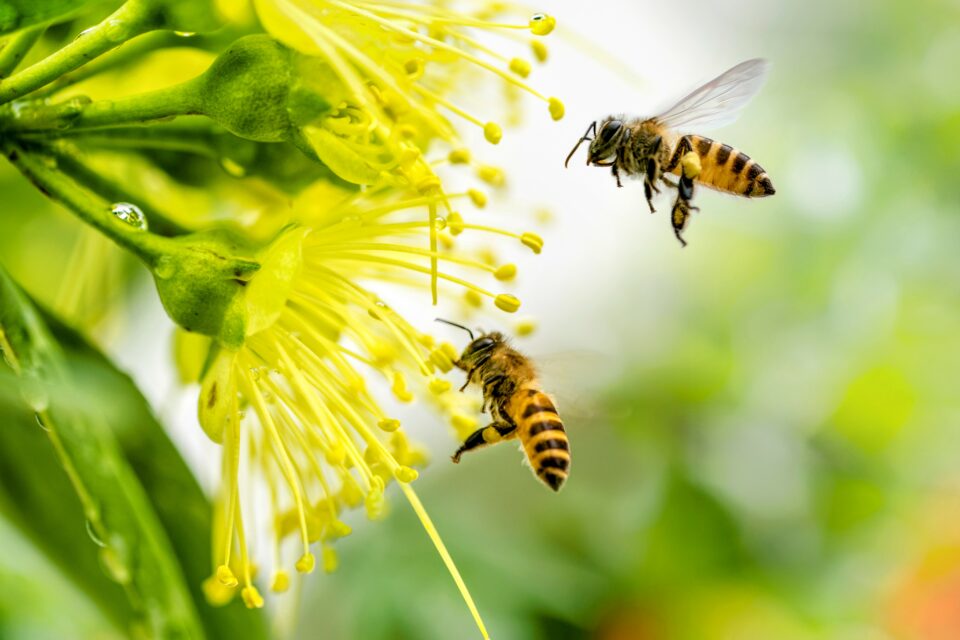 Bees are indispensable pollinators, boosting not only agricultural productivity, but also the diversity of flowering plants worldwide. However, in recent decades, both native bees and managed honeybee colonies have witnessed significant population declines, most likely caused by multiple interacting factors, such as habitat loss, parasites and disease, and increased pesticide use.

Now, a team of researchers led by the University of Michigan (U-M) has found that efforts to promote the health of native and managed bees have to consider specific habitat needs, such as the density of wildflowers. Moreover, improving other habitat measures, such as the amount of natural habitat surrounding croplands, could increase bee diversity, while having mixed effects on overall bee health.

As part of her doctoral thesis, Fearon netted and trapped over 4,900 bees at 14 winter squash farms in southeastern Michigan and tested them for the presence of three viral pathogens. The analysis revealed that lower virus levels were linked to greater species richness among local bee communities, thus providing support for what ecologists call “the dilution effect” – a rather controversial hypothesis arguing that increased biodiversity could dilute infectious disease transmission.

However, in the new study, Fearon and her colleagues discovered that also habitat quality can drive changes in both biodiversity and viral prevalence. “Many studies have shown that high-biodiversity communities are ones with low rates of infectious disease. But we also know that better habitat quality often leads to greater biodiversity,” said study co-author Chelsea Wood, an expert in the ecology of pathogens at the University of Washington.

“So which factor is actually driving down disease risk: biodiversity or habitat? Do high-biodiversity communities dilute disease prevalence? Or do communities in high-quality habitat have healthier hosts, who are better at resisting infection? Our data show that some apparent ‘dilution effects’ could actually have nothing at all to do with biodiversity.”

By re-examining the previously collected bee data and adding new information about local and landscape-level habitat, the scientists found that habitat can have both positive and negative effects on pathogen levels in bee communities. More specifically, a higher proportion of natural area and a greater richness of land cover types were associated with increased viral prevalence, while greater floral density was linked to reduced prevalence.

“Areas with greater floral abundance could provide better pollen and nectar resources for bees to help them resist or fight off infection,” said study senior author Elizabeth Tibbetts, a professor of Ecology and Evolutionary Biology at U-M. “Additionally, greater floral abundance may reduce the effective foraging density of pollinators and result in reduced pathogen transmission.”

“Most importantly, we found that greater habitat quality in the surrounding landscape was a key driver of the dilution effect that we previously observed. This provides evidence for a habitat-driven biodiversity-disease relationship, where habitat quality indirectly impacts bee health by altering bee species diversity,” she concluded.