Transition from hunting to herding discovered in ancient urine • Earth.com 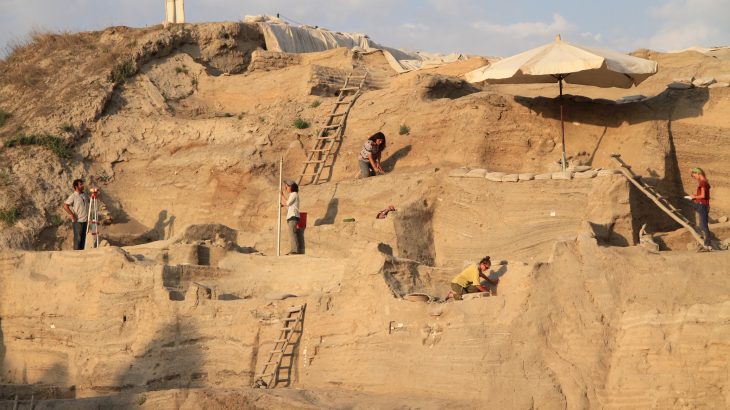 Transition from hunting to herding discovered in ancient urine

Researchers from the Earth Institute at Columbia University have turned to ancient urine to work out the details of the transition from hunting to herding during the Neolithic Revolution, which occurred around 10,000 BC. The urine salts, the scientists claim, can help them map out the pace of change when humans first began domesticating animals in ancient Turkey.

“This is the first time, to our knowledge, that people have picked up on salts in archaeological materials, and used them in a way to look at the development of animal management,” said lead author Jordan Abell, a graduate student at the University of Columbia Lamont-Doherty Earth Observatory.

Prior to using urine salts, researchers relied on bone fragments and fossilized dung to estimate population size in ancient settlements, however, this process can be difficult.

“We thought, well, humans and animals pee, and when they pee, they release a bunch of salt,” Abell said. “At a dry place like this, we didn’t think salts would be washed away and redistributed.”

Using the salts, scientists were able to calculate the density of humans and animals at the Turkey settlement at any specific time. Around 10,000 years ago, they found a jump in the number of animals and people at the settlement — from about zero to approximately one person per one animal for every 10 square meters. This finding suggests that domestication may have happened quicker than previously thought, perhaps within just 1,000 years.

The team looked at over 113 samples from the site in question, calculating sodium, nitrate, and chlorine salt levels along the way. They watched as the amount of urine salts increased over time, with the largest spike occurring between 10,000 and 9,700 years ago. Abell says that these findings support the theory that the ancient humans began as hunters of sheep and goats, then they corralled a few and then corralled a larger number, finally keeping domesticated goats and sheep on the periphery of the settlement.

The findings appear in Science Advances.

The researchers hope to eventually be able to discern human urine from livestock urine. However, even without being able to do so, using urine salts as a method for tracking population have been proven useful in arid areas where dung and bone fragments may be lacking.