Hyenas lived in the Arctic during the last ice age, study reveals • Earth.com 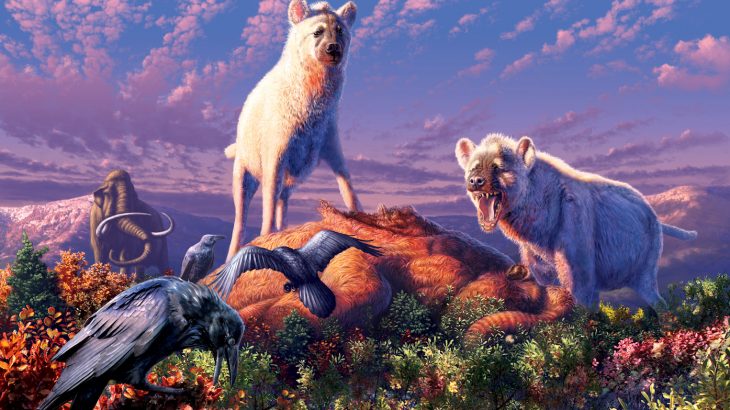 Hyenas lived in the Arctic during the last ice age, study reveals

A new study led by the University at Buffalo has revealed that hyenas once dwelled in a much different environment than the African and Asian ecosystems where they live today. Based on the first known fossils of hyenas found in the Arctic, the researchers discovered that ancient hyenas lived in this region during the last ice age.

The study was focused on two teeth discovered in the Canadian Yukon Territory in the 1970s. While paleontologists had initially suspected that the fossils belonged to hyenas, the current investigation is the first to confirm this theory.

The researchers compared the teeth to a global sample of hyena fossils and ultimately linked them to the “running hyena” Chasmaporthetes.

“Fossils of this genus of hyenas had been found in Africa, Europe and Asia, and also in the southern United States. But where and how did these animals get to North America? The teeth we studied, even though they were just two teeth, start to answer those questions,” said study first author Dr. Jack Tseng.

Ancient hyenas likely entered North America through Beringia. This area, which includes Alaska and Yukon Territory, connects Asia with North America when the sea levels are low. Eventually, the animals moved south all the way to Mexico, according to the researchers.

“It is amazing to imagine hyenas thriving in the harsh conditions above the Arctic Circle during the ice age,” said study co-author Dr. Grant Zazula. “Chasmaporthetes probably hunted herds of ice age caribou and horses or scavenged carcasses of mammoths on the vast steppe-tundra that stretched from Siberia to Yukon Territory.”

The fossil teeth are likely between 850,000 and 1.4 million years old. However, Dr. Tseng explained that the first hyenas crossed into North America long before that, as the earliest known hyena fossils on the continent date back about 5 million years.

Hyenas disappeared from North America somewhere between half a million to a million years ago before the first humans arrived. It is not clear why they vanished at this time, but it is possible they were replaced by the short-faced bear, which lived in North America until about 12,000 years ago.

“Our previous understanding of where these far-ranging hyenas lived was based on fossil records in southern North America on one hand, and Asia, Europe and Africa on the other,” said Dr. Tseng. “These rare records of hyenas in the Arctic fill in a massive gap in a location where we expected evidence of their crossing between continents, but had no proof until now.”

The study is published in the journal Open Quaternary.