Quantum leap: The invasion of the African clawed frog • Earth.com 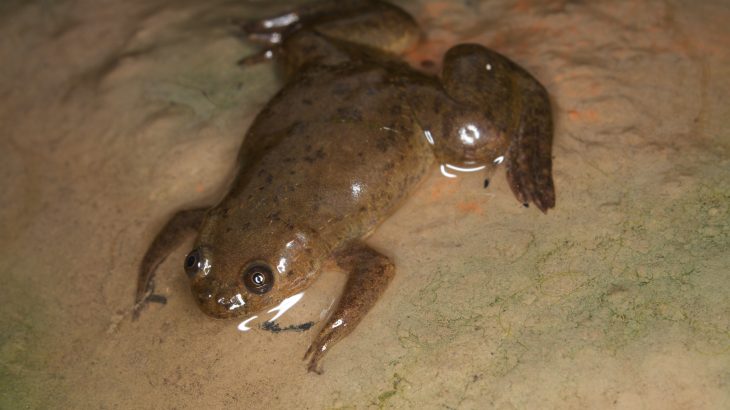 Quantum leap: The invasion of the African clawed frog

When I was 6 or 7, a package came for me. I awaited it breathlessly, having never received more than a card in the mail. It’s contents would complete the gift my mother had given me … for Christmas or my birthday, I don’t remember. Since both were in winter, I’d had to wait several months until Chicago weather conditions relented and shipping conditions were safe. You see, the contents of the package were alive.

Some may remember having received their own Grow a Frogs—distributed by a company that I was mildly surprised to learn still exists. The idea was this: a loving relative purchased a kit at a science supply store and then placed an order for the tadpole that would inhabit the tiny plastic tank. It would then metamorphose into a full grown frog, given the proper care. It was, really, just a more advanced incarnation of Sea Monkeys.

Reader: if you were one of these lucky kids, I hope your initial experience was less traumatizing. What arrived that spring day was a small baggie of blue water, more suited to holding illicit substances than a living amphibian larvae. Bobbing in the murky cerulean liquid—which appeared to have been scooped from the bottom of a urinal—was a deliquescing comma-shaped form. The only thing growing from that tadpole was some kind of aquatic mold. My Grow a Frog was unambiguously deceased. Early pet ownership is nothing if not an object lesson in mortality.

A phone call and a week or two later, another package arrived.

This one, which contained an identical baggy of water, contained the promised larvae, squirming and ramming against its plastic prison. This tadpole would, indeed, grow into an African clawed frog (Xenopus laevis), so named for the unique claws on the first three toes of its hind legs, unique to the species. Within months, the translucent blob had sprouted legs, absorbed its tail, and become a tiny, web-footed creature with the charming habit of shoving food into its mouth with its front legs. In retrospect, I believe it was a female due to its protuberant genitalia, though I can’t be sure. I dubbed her Jetsam. From there, she continued to grow, eventually reaching the size of my palm.

One day, while I was cleaning her tank, something awful happened. Jetsam, who had been comfortably ensconced in a glass of water, made a run for it. For a predominantly aquatic creature, she made impressive progress across the laminate of the kitchen counter and launched herself into the kitchen sink. I grabbed for her and, for a moment, had her in my fist. But, with surprising force, she squelched her way from my grasp and disappeared down the drain. Impressive on an evolutionary level, to be sure. How many of her wild conspecifics had executed similar maneuvers when faced with the fish and birds that prey upon them in their native southern Africa? But, for a first grader, it was desolating. I’d failed my poor pet and allowed her to be sucked into the horrors of the suburban Chicago sewage system.

In hysterics, I conveyed the situation to my parents through a film of snot and tears. My father, ever the pragmatist, proceeded to remove the u-bend pipe beneath the sink. A deluge of solidified grease and other unspeakable things poured from the pipe into the bucket below. And, finally, miraculously, my frog plopped into the putrid mess, apparently unphased.

Such is the indomitable constitution of the African clawed frog (Xenopus sp.), a genus recently discovered to contain close to 30 species, many of them difficult to differentiate. Xenopus laevis and Xenopus tropicalis are the most-studied. Largely aquatic, this amphibian has nonetheless managed to invade most continents and has proven adept at overland travel provided that the surrounding environment is not too arid. Transported across the world due to its utility as a laboratory animal, and, latterly, as a novelty pet, it has adapted to a wide variety of habitats. Native to southern Africa from Angola to Namibia, it has invaded some 15 countries in North America, South America, Europe, and Asia. Like the American bullfrog  (Lithobates catesbeianus) and the cane toad (Rhinella marina), the African clawed frog has proven to be an amphibian cosmopolitan.

It all started when in 1930 it was discovered by scientist Lancelot Hogben that Xenopus laevis could be used to test for human pregnancy. When injected with the urine of a pregnant woman, which contains the hormone chorionic gonadotropin, female frogs would begin to lay eggs and males would produce sperm. Within the next decade, enormous numbers of clawed frogs were sold to laboratories for use in such tests. Initially wild-caught specimens met the demand, but the species proved easy to breed in captivity, further facilitating its takeover of the pregnancy test industry. Xenopus also proved to be a useful model organism and ultimately became one of the most studied animals in the world. Xenopus tropicalis was the first amphibian to have its genome sequenced in 2010.

By the 1960s, more advanced (and less horrifying) means emerged for determining whether a woman was in the family way. (I mean, really, can you imagine how different sitcoms would be if the ingenue had to stick a syringe into a frog to determine whether or not she was expecting?) Having outlived their usefulness, innumerable Xenopus were dumped into nearby waterways to fend for themselves. For them, this was probably all to the good. I’d certainly rather live out my life in a ditch than spend my days dodging hypodermics full of pee.

For the environment, and the native organisms inhabiting those waterways, not so much. African clawed frogs are voracious eaters and nightmarishly fecund to boot, producing upwards of 30,000 eggs at a time. And they can do this several times over a season. They are particularly well-adapted to colonization of man-made bodies of water that have few other occupants. In these cases, they may subsist through cannibalism of their own tadpoles, which are capable of feeding on microscopic organisms as small as viruses and can thus extract nutrients from even relatively lifeless cesspools. 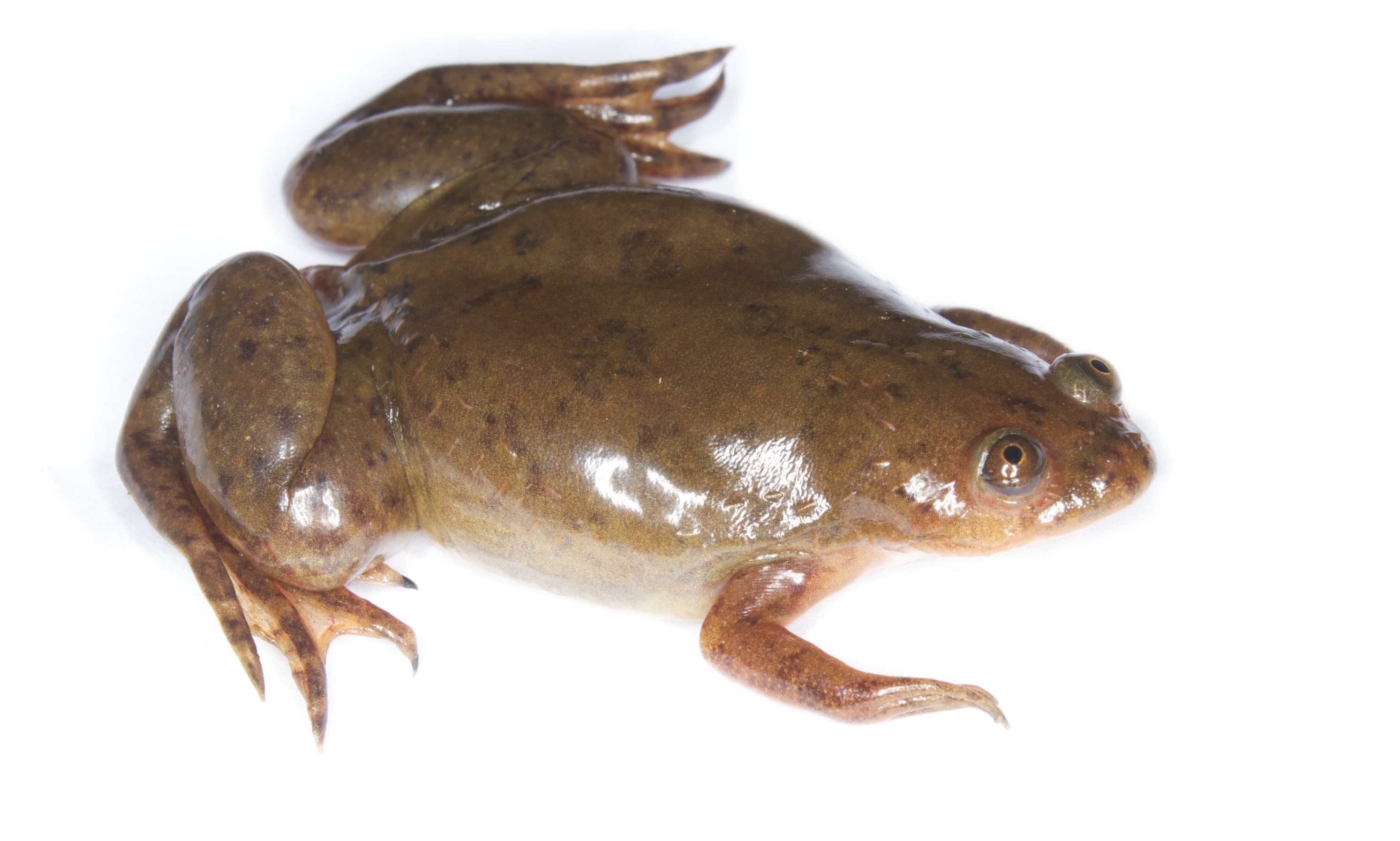 In natural bodies of water, they can seriously impact the survival of native species. Their adaptable nature allows them to thrive in all sorts of waterways. Though they prefer the still waters of ponds and lakes, they can inhabit flowing streams and rivers as well and can even tolerate extremely brackish water. Persistent populations exist in California and Arizona and they have been found in nine other states, including those with harsh winters. A specimen was found in a nearly frozen pond in Colorado in 1990 despite having evolved in a hot climate. They have also invaded the United Kingdom, the Netherlands, Germany, Portugal, Indonesia, Japan, Mexico and Chile with varying degrees of success. In arid climates such as that of Arizona, the frogs typically remain in the bodies of water to which they were originally introduced, and may even survive periods of drought by burrowing into the mud for up to eight months. In damper climates that allow them to avoid dessication, they may migrate overland in large groups.

Among the best-studied of the invasive populations are those in California, where the Mediterranean climate has allowed the species to spread to multiple locations since it was first discovered there in 1968. In the Golden State, the frogs may pose a threat to a number of endangered species, including the tidewater goby (Eucyclogobius newberryi), the three-spined stickleback (Gasterosteus aculeatus), and the California red-legged frog (Rana aurora draytonii), as well as to the near threatened western spadefoot toad (Spea hammondii). The species has also been implicated in declines of the western toad (Anaxyrus boreas) in some areas. This is likely due to its taste for the eggs of other amphibians, a welcome supplement to a diet comprised largely of aquatic invertebrates. Voracious predators, swarms of the frogs are capable of dismembering even larger food items using their hind legs. It is perhaps a small comfort that this brutal technique is most frequently used on carrion rather than on living prey.

Perhaps even more concerning than its consumption of native species is the fact that, along with the American bullfrog, the clawed frog appears to be one of the main vectors of chytridiomycosis (Batrachochytrium dendrobatidis), a fungal disease that has devastated amphibian populations world-wide. A 2004 analysis of preserved specimens found evidence of the fungus dating as far back as 1938. The disease causes thickening of the skin, which frogs and other amphibians use in osmotic regulation. Infection is fatal to many species and has caused a number of extinctions. Interestingly, the African clawed frog appears to be unaffected. The tadpoles may even eat the zoospores.

I’m thus doubly glad that Flotsam didn’t succeed in her jailbreak. Had she survived her journey through the sewers—not unlikely given the dauntless nature of the species—she may have unwittingly become a web-footed Typhoid Mary. In fact, she lived another 10 years, alongside another frog and an equally intrepid feeder goldfish in a tank on my desk. The species has reached ages of up to 25 in captivity; her untimely demise was the result of a toxic slow-release feeder tablet intended to tide her over during a family vacation. A tragic end, to be sure, but at least she lived a life free of intravenous insult.