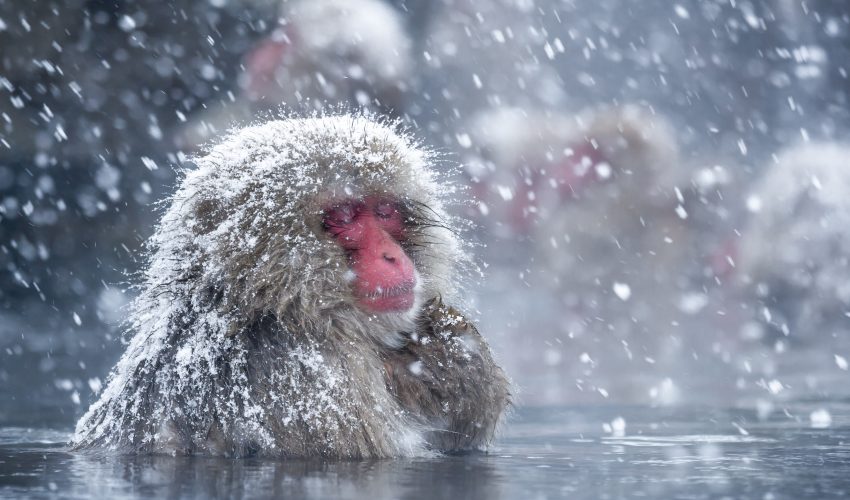 Japanese snow monkeys have been bathing in a natural hot spring at Jigokudani for decades, and the baths have even become a popular tourist attraction. A new study from Kyoto University suggests that the snow monkeys have adopted this behavior as a way to deal with the stress of a cold climate.

Japanese macaques reside farther north than any other species of non-human primates. Scientists have speculated that snow monkeys living in the Jigokudani Monkey Park in Nagano are able to maintain their body temperatures by growing long, thick fur in the winter.

The Japanese macaques are also the only group of monkeys known to take hot spring baths, a behavior that was first observed in 1963, but there has been no scientific proof up until now that they do this in order to stay warm.

The current study was focused on 12 female snow monkeys. The experts documented how much time the monkeys spent in the hot springs during spring and winter months. They also collected faecal samples during times of extreme cold to analyze the amount of faecal glucocorticoid (fGC) metabolite present, hormones that are influenced by thermoregulatory stress and the management of a body temperature.

The results of the analysis confirmed that female snow monkeys use the hot spring more often in winter, particularly during the coldest weather. Bathing in the hot spring was found to conserve energy by reducing the loss of body heat, and was found to reduce stress hormone levels in some of the females as well.

“This indicates that, as in humans, the hot spring has a stress-reducing effect in snow monkeys,” said lead author Rafaela Takeshita. “This unique habit of hot spring bathing by snow monkeys illustrates how behavioral flexibility can help counter cold-climate stress, with likely implications for reproduction and survival.”

The research team also established that the hundreds of visitors who watch the snow monkeys bathe on a daily basis had no effect on their stress levels.

The study is published by Springer in the journal Primates.