The last male Sumatran rhino in Malaysia has died • Earth.com 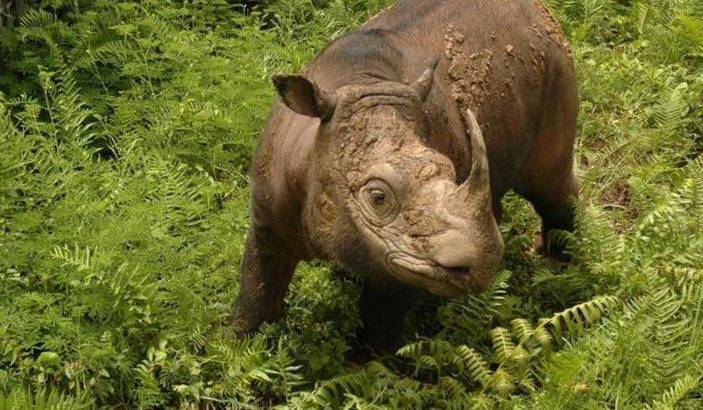 The last male Sumatran rhino in Malaysia has died

The last male Sumatran rhino in Malaysia has died of liver and kidney damage, the Borneo Rhino Alliance (BORA) confirmed. The rhino’s name was Tam and he was believed to have been in his 30s.

Sumatran Rhinos were declared extinct in the wild in 2015 in Malaysia, with only three small populations remaining in Indonesia. The small rhinos population has declined by 70% in the last twenty years.

Tam was captured in a palm oil plantation at approximately 20 years old in 2008 and relocated to Tabin Nature Reserve where he has lived since, according to Herald Malaysia. Tam was part of an unrealized breeding program plan in Malaysia. There is only one other Sumatran Rhino in Malaysia, a female, Iman who was captured for captive breeding in 2014 but is now past her reproductive prime, and she has never successfully bred in captivity.

Iman showed signs of a ruptured tumor in her uterus in 2017. Another female rhino in Malaysia was euthanized in 2011 after suffering from skin cancer. These illnesses seem to be the result of poor genetics from a dwindling population of animals, the death throes of if not a species, a population. The decline of the Sumatran Rhino in Malaysia has been exasperated by neglect from conservationists in Indonesia.

In modern times, where data is collected on wild animals and they are often kept in cages, it’s much easier to notice the passing of a species. Sometimes it comes down to the death of one, iconic individual animal. Martha was the name of the last known passenger pigeon, who was kept in the Cincinnati Zoo until she died in 1914. In 1936, a Tasmanian Tiger or thylacine died in the Hobart Zoo in Tasmania. A mechanism designed to allow the animal inside to stay warm failed and apparently the Tasmanian Tiger died from the cold.

Sometimes extinctions like these haunt us. Whether real or not, several sightings have been reported of thylacines after the animal was officially written off as extinct. The more common pigeons easily bring to mind what must have been awe inspiring flocks of passenger pigeons moving like clouds across the sun for entire days. Museums hold the remains of these dead species. Preserved in life-like poses, they become relict for the faithful, but I wonder if these extinctions mean more to us than when a hunter went out and simply no longer found a certain prey.

Despite the lingering ghosts of the human slaughtered dead, species continue to die. Individuals pass away in undignified cages, prisoners of the same that killed their kin or alone under the sky of their eerily quieted homes. With individuals, so go species. With blood on our hands, we swear to learn from our mistakes and yet, on it goes. The Center for Biological Diversity reports that the rate of extinction is 1,000 times greater than a natural background of extinction. 99% of endangered species are threatened by human activities. The rhinoceroses of Malaysia are no different.

In 2018, the last male northern white rhino died, signaling the end of a subspecies. The last of his kind, the northern white rhino was named Sudan, he died at the age of 45 in captivity in Kenya, according to the BBC. The International Rhino Foundation reported that as a species, white rhinos are doing better than many others, with an estimated population of approximately 20,000 animals. Greater One-Horned Rhino populations are on the rise as well, with more than 3,500 animals. Unfortunately, Black rhino populations have dropped drastically but with about 5,000 individuals, there’s still a lot of hope.

Poaching is a huge factor in the decline of rhinoceroses, whose horns are valuable on the black market for traditional Chinese medicine. Despite this, the rhinos in Africa have in some cases grown in population, proof of some successful conservation measures.

Rhinoceros species in Asia haven’t fared nearly as well as these in Africa. There are perhaps only 67 Javan Rhinos left alive in the world, found only in Ujung Kulon National Park, Indonesia, where they are fiercely protected. Unfortunately, the park is near an active volcano, an eruption could quickly push the Javan Rhino into extinction. The last Javan rhino known to live in Vietnam was found dead with its horn hacked off.

In 2012, the Indonesian government and several conservation organizations signed an agreement committing themselves to a program of collaboration with Malaysian groups on the conservation of the Sumatran Rhino. Despite efforts on the part of Malaysia, the agreement apparently came to nothing. Now, it seems that the last of Malaysia’s rhinoceroses will soon be gone.

The Herald Malaysia reported that Tam stopped eating in April. The passing of Tam represents the end of a slender hope to successfully breed rhinos in Malaysia and save a population there.

In Indonesia, conservation efforts are still under way. Mongabay reported in February that the Indonesian government aims to officially tally the rhino population within three years, which currently stands at estimates of 30-100 wild animals with several in captivity. The International Rhino Foundation reports that it has been involved in creating a Sumatran Rhino Sanctuary as well as sponsoring rhino protection units. The result of the efforts is the prevention of poaching in areas where these units operate for nine years. Along with captive breeding programs in Indonesia as well as collaboration with organizations in the US, there is some hope.