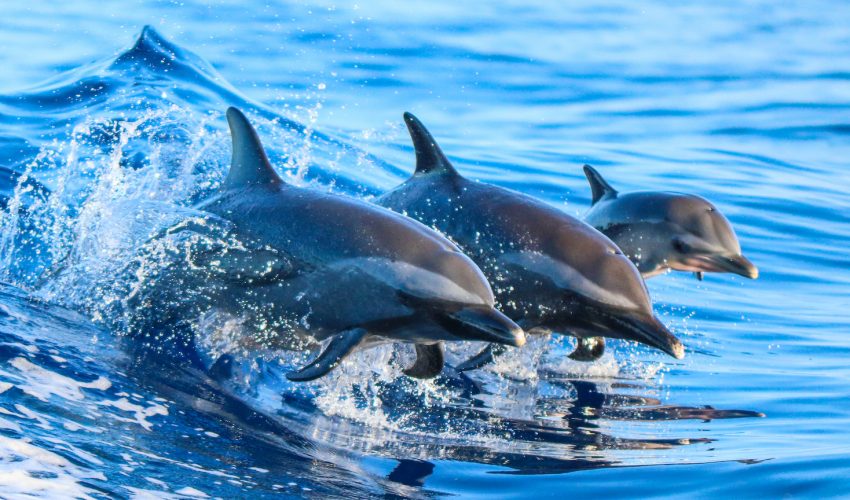 Late bloomer dolphins are especially at risk in tuna fisheries

It may seem that dolphins and other oceanic diving species go straight from being born to exploring the depths of the ocean with relative ease – after all, how else would they avoid predators and catch those small, elusive fish? But just because they’re born in water doesn’t mean their built-in SCUBA system is fully developed from birth.

The muscles of fully developed diving species – such as dolphins, whales, birds, and seals – contain more myoglobin than the muscles of land-based animals. Myoglobin is a protein that carries oxygen in the bloodstream, which is obviously an extremely important physiological function for animals that go without surfacing for minutes or hours at a time. Their muscles are also better equipped at neutralizing the lactic acid produced when these diving species switch to anaerobic respiration after they run out of oxygen toward the end of a long dive.

These anatomical and physiological differences make sense between land and marine animals. But researchers at the University of California, Santa Cruz wanted to know if these differences extended to comparisons between deep-diving species and species that remain in shallow coastal waters. Might a deep-diving species such as the spinner dolphin have larger reserves of myoglobin compared to a more coastal species such as the bottlenose dolphin?

Researcher Shawn Noren and her team set out to measure the oxygen storage capacity and muscle biochemistry of spinner dolphin swim muscles in order to test their theories.

They discovered that the spinner dolphin swim muscles did not mature any quicker than the muscles of coastal species. The data showed that spinner dolphins’ ability to carry oxygen through myoglobin increased as the animals aged. The ability of the muscle to neutralize lactic acid also increased, however, it plateaued at an age of about 1.6-2 years. This is the age at which young dolphins are typically weaned, and matches with the age at which other coastal species’ diving physiology reaches maturity.

Ultimately, Noren and her colleagues determined that ocean-going spinner dolphin calves do not develop the ability to sustain deep dives any faster than the shallow-diving coastal species. However, the youngest spinner dolphins already had higher concentrations of muscle myoglobin than coastal bottlenose dolphins at the same ages.

The researchers also surmised that this slow development could put young dolphin calves at risk of being separated from their mothers during pursuits by commercial tuna fishing fleets. “The relatively underdeveloped muscle biochemistry of calves likely contributes to documented mother-calf separations for spinner dolphins chased by the tuna purse-seine fishery,” explains Noren.

It’s possible that this could negatively affect dolphin populations if tuna fishing continues at its current rate. Luckily, continued research should be able to shed more light on how these deep-diving species develop and may one day provide a solution for declining populations.