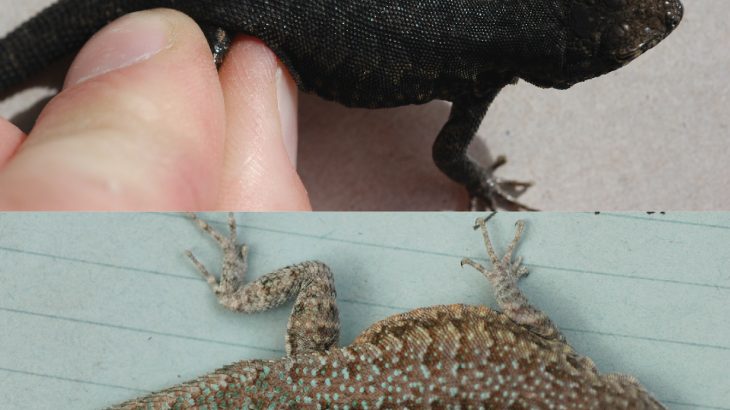 A unique species of lizard in the Mojave Desert is able to change its coloring based on its environment, and the change happens over a short period of time, according to a new study.

Side-blotched lizards typically have a sandy coloring, but on the Pisgah Lava Flow in the eastern region of the Mojave Desert, the lizards have extremely dark coloring.

This varied coloring previously puzzled scientists as it was not understood how the lizards, which had evolved to adapt to a specific environment, could change their coloring and live on the dark, volcanic rocks.

One possible explanation is the “Baldwin effect,” which states that many traits in animals are not fixed but can change if necessary. It’s “phenotypic plasticity” allows an animal to change its appearance to thrive in a new environment. These changes eventually spread through the population.

Researchers from the University of California Santa-Cruz examined side-blotched lizards on the Pisgah Flow and were able to identify the underlying mechanisms that create the Baldwin effect.

The study was published in the journal Current Biology and the results present the most detailed example of the Baldwin effect in the wild.

Not only can the lizards easily change their colors, but the researchers found that the colors begin changing in just a week of being introduced to a new environment.

“Baldwin predicted that plasticity allows organisms to colonize new environments, and they then develop new adaptations through natural selection,” said Ammon Corl, the first author of the study, who had been researching side-blotched lizards for more than 30 years. “ Until now, however, we have lacked the genetic tools to show this is going on in a field setting.”

The researchers studied the plasticity of the lizard’s coloration and the underlying genetic mechanisms that influenced these changes.

When the researchers moved the lizards from one color background to another, changes in skin color were observed within a week and continued over a gradual period of time.

It’s not just the Pisgah lizards that have the plasticity to match the dark rocks. The researchers found that both populations of lizards have the ability to change colors, but there were genetic differences between the two as well.

“We’ve studied side-blotched lizards all over, even at another lava flow, and these genetic variants are only found at Pisgah, so we know that’s where they arose,” said Barry Sinervo, the study’s coauthor. “These are genes that govern coloration by controlling the melanin production pathway, but in a complex way. The Pisgah lizards have the best match to the color of the lava of any population, yet they can still go back to sand and match a completely different background.”