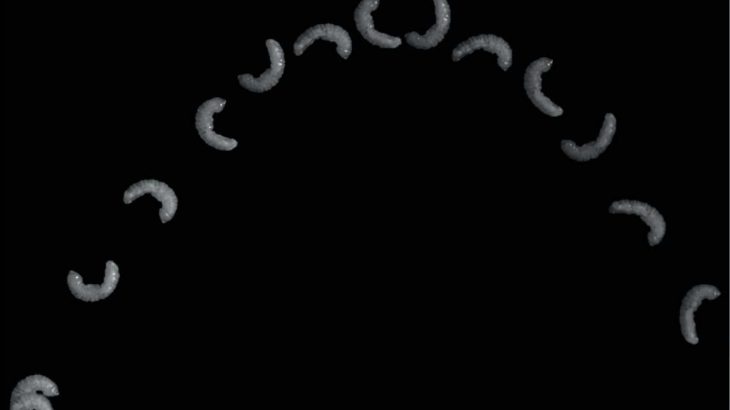 Gall midge insects have interesting relationships with the plants on which they lay their eggs. Newly hatched gall midge larvae burrow down into the plant stems of goldenrods and can stimulate the production of galls.

Galls are abnormals growths that can occur on the leaves, roots, stems or flowers of a plant and for the gall midge maggot, these galls provide shelter, food, and a place to lay eggs.

Mike Wise, a researcher at Roanoke College, has been studying goldenrod galls and the maggots that emerge from them throughout his career.

It was through dissecting thousands of galls that Wise discovered something extraordinary about the way newly hatched larvae flee to safety if their gall is compromised.

“If their galls are damaged in nature, they need to scoot to have a chance at survival,” said Wise.

The larva leaps into the air, circling in loops as it falls back down to the ground. Wise along with an expert on locomotion, Sheila Patek, investigated this surprising response.

“I knew Sheila was an expert in cool mechanisms of locomotion, so I wanted her opinion,” said Wise.

It took three years to film the Asphondylia maggots as they leaped into the air. The larvae are only three millimeters long, and what’s more, they only jump for a short time each year.

Collecting enough larvae and perfecting a technique to film the leap in its entirety took a lot of time and patience.

“We had to zoom in with the camera lens to see the animal clearly and then we had to operate within a small field of view on our computer screen,” said Grace Farley, a member of the research team. “We really had to work as a team and communicate’.

After filming enough maggots, the researchers discovered that the larva curls its body into a loop as it prepares to jump. Once both ends of the maggot’s body meet, the animal continues to compress its lower half until a kink starts to form which serves as a makeshift leg.

This leg pushes off the ground and catapults the maggot into the air. This move may seem dangerous and costly energy-wise, but Gregg Sutton from the University of Lincoln in the UK calculated that crawling was 28.75 times more costly than jumping.

The researchers found the maggot can lock into a looped position thanks to microscopic hairs at both ends of its body.

The study, published in the Journal of Experimental Biology, helps shed light on this gravity-defying defense mechanism that maggots can use if their galls are damaged.