What makes malachite so mesmerizing • Earth.com 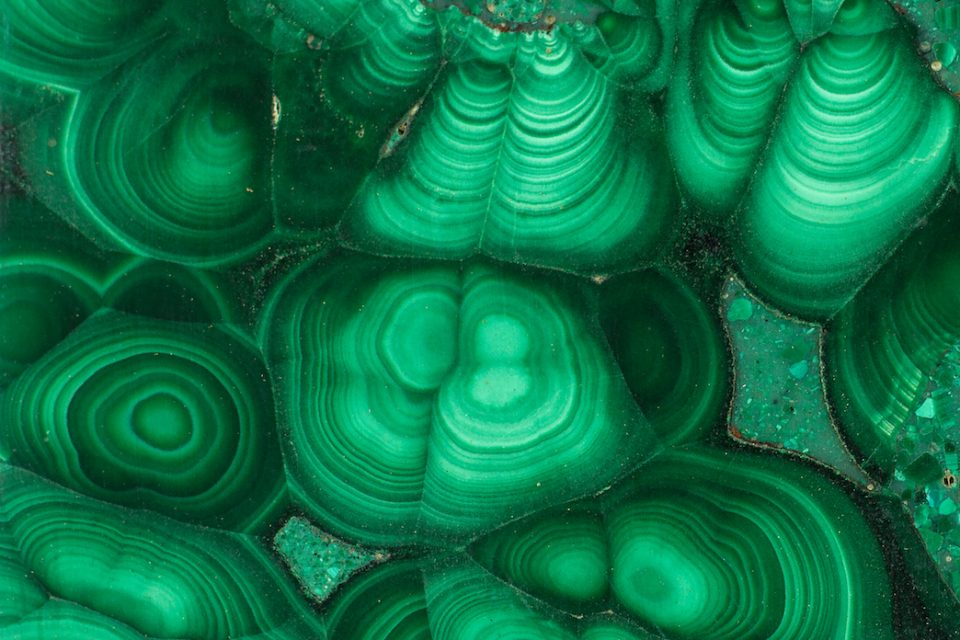 What makes malachite so mesmerizing

Greek philosopher Theophrastus damned it with faint praise in terming it “pseudo-emerald.” But anyone who has seen photographs of the stunning Malachite Room in the Winter Palace in Saint Petersburg, designed in 1839 as a place where Nicholas I’s wife, Empress Alexandra Fyodorovna could receive state guests, knows that there’s nothing pseudo- about this striking and immediately recognizable copper carbonate mineral.

Even on a small scale, the intricate rings of various tints of rich green make malachite among the most stunning and sui generis of Earth’s lapidary offerings. It’s name, bestowed by Pliny the Elder, derives from the Greek word for “mallow,” a green herbaceous plant; the present spelling dates to 1661. Though its viridian hues invite such comparison, really, malachite is an imitation of nothing. Calling it a pseudo-emerald is like calling a lake a pseudo-ocean. The contrast gives short shrift to its unique beauty.

The multi-hued rings of the stone form over time when aqueous solutions containing dissolved copper come into contact with calcium carbonate (limestone) or when calcium carbonate solutions come into contact with rocks containing copper. Malachite deposits usually occur as stalactites or botryoidal clusters—shaped like bunches of grapes. Occasionally they occur in crystalline form—even sometimes as bizarre, fragile spirals—though the crystals are usually minute.

They may also occur as pseudomorphs—so there is actually something pseudo- about them after all. Pseudomorphs are mineral deposits in which the original mineral has slowly been replaced by another. Malachite typically occurs as a pseudomorph of azurite, a blue mineral as its name suggests, and specimens in which this process is incomplete display both the green of malachite and the blue of azurite. On rare occasions, this is reversed and azurite replaces malachite. Malachite may also form as a pseudomorph of chalcopyrite, gypsum, calcite, or pyrite, among others. And it is frequently found alongside other minerals, including chrysocolla, cuprite, turquoise, and limonite. The mineral, which may contain as much as 58% copper, typically forms in the oxidizing zones above copper deposits and has long been used as an indicator of the presence of copper below.

Copper has been mined for millennia—and thus, so has the malachite that usually sits atop it. Copper was, in fact, the first metal to be used on a wide scale by early man, though older gold artifacts have been found. The Copper Age, also known as the Eneolithic or Chalcolithic, predates even the Bronze Age. (Dates are inexact. The Chalcolithic may have begun as early as 6000 B.C. and as late as 4500 B.C.) A copper ornament found in Iraq dates to 8700 B.C., suggesting that use of copper predates even the age bearing its name. Deposits along Lake Superior were mined as early as 5000 B.C. and formed the basis of a Native American culture known as the Old Copper Complex due to the rich trove of copper artifacts it left behind.

There is evidence that malachite was smelted to derive copper at Ei Bunar, a mine in Bulgaria, around the same time or even earlier—the first evidence of smelting to isolate metals from the rocks in which they are found. And the ancient Egyptians began mining malachite—and smelting it—in the Timna Valley of Sinai in Israel beginning around 4000 B.C. (The Romans later took over this operation in the 2nd century A.D. and it was likely used by other cultures as well.) 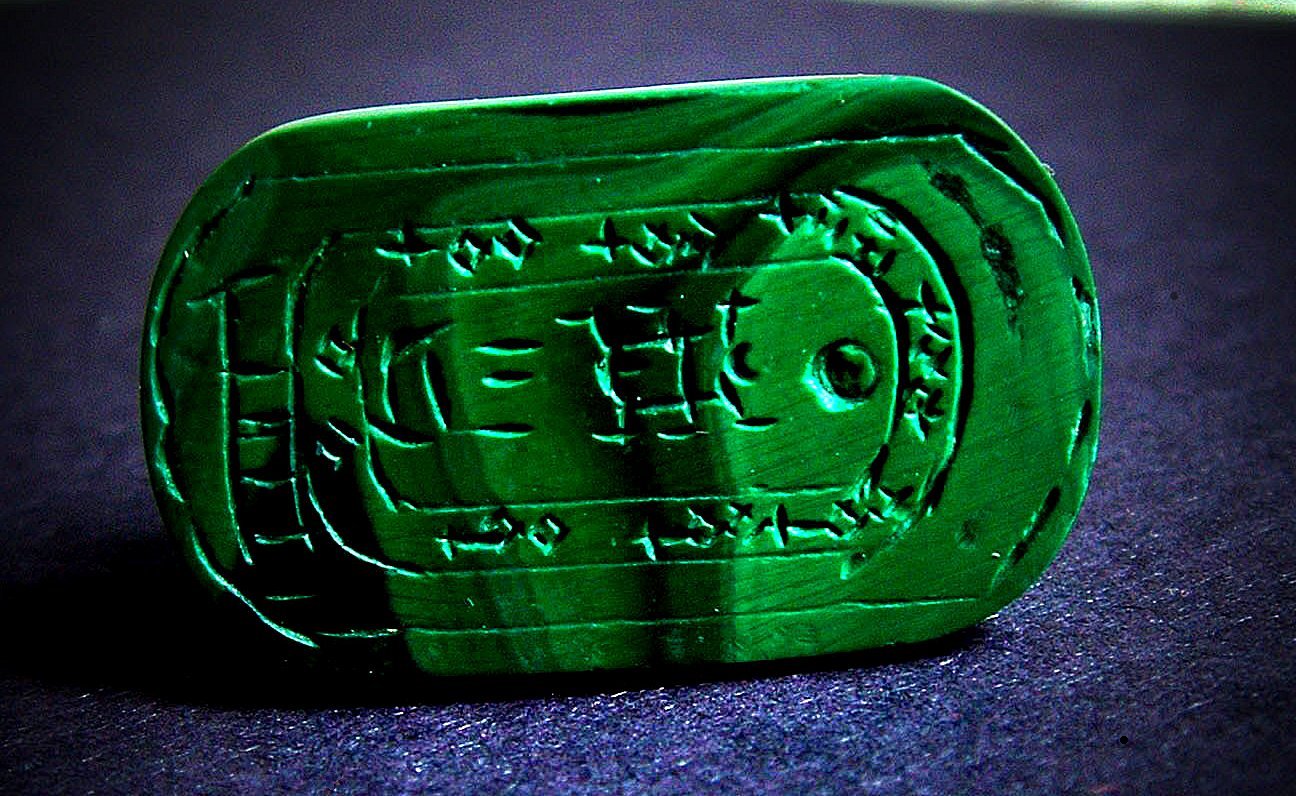 They also valued the mineral itself. They fashioned it into jewelry, including protective amulets. In one Egyptian legend, a young woman drops her malachite ornament in a lake while boating with the pharaoh. Though he promises to replace it, she insists on finding the gem. The pharaoh then orders the court magician to retrieve it. Casting a spell, he removes half of the lake’s water and stacks it atop the rest, allowing the ornament to be recovered. The Egyptians also ground the mineral and used it as a cosmetic and as paint—malachite has been isolated from Egyptian tomb paintings.

Malachite was exploited in other parts of Europe as well. Ötzi the Iceman, a mummy found in the Ötztal Alps between Italy and Austria, dates to 3300 B.C. The copper axe he was carrying at the time of his death in known to have been derived from smelted malachite and concentrations of copper and arsenic in his hair suggest that he may have himself been involved in smelting operations.

The Great Orme mines in Wales, which are full of malachite that was smelted to derive copper, are thought to have been first exploited around 1800 B.C. Disturbingly, many of the tunnels appear to have been dug by children. Later copper mining and smelting operations have been unearthed in other corners of the world too—from China to West Africa to South America. And, as one might expect, malachite ornaments have been found in many of these places. A stunning malachite mask dating to 700 A.D. was discovered in 1994 in a Mayan tomb in Mexico belonging to a woman known as the “Red Queen” due to the fact that her body was coated with cinnabar powder.

Of the later malachite enthusiasts, the Russians made perhaps the most spectacular use of the mineral. Enormous quantities were extracted from extensive deposits in the Ural Mountains beginning in the 1800s and deployed on a massive scale. Aside from the Malachite Room, Saint Isaac’s Cathedral provides perhaps the best example of the lavish abandon with which malachite was used as a decorative material. Ten columns comprising some 16 tons of the green stone decorate the church’s sanctuary. And Tsar Alexander gifted Napoleon with a massive suite of objects made from malachite, including tables, vases, and candelabras, now housed in the eponymous Salon des Malachites in the Grand Trianon at Versailles.

Large scale use of Russian malachite can also be seen in a set of enormous doors in Mexico City’s Chapultepec Castle; they were originally displayed at the 1851 Great Exhibition in London. The significance of malachite in Russia even extends to its folklore. In one tale, “The Queen of Copper Mountain,” a young man attracts the attention of a female figure believed to guard the copper deposits of the Urals. She offers him access to her wealth, but he declines, deciding to remain with his human love. The queen was said to disguise herself as a lizard when mortals approached, but when she appeared in human form, she was garbed in shimmering malachite-toned robes. The legend inspired the 1946 film The Stone Flower, in which a stone carver attempts to carve a realistic flower from malachite and is ensnared by the queen when he seeks her help. 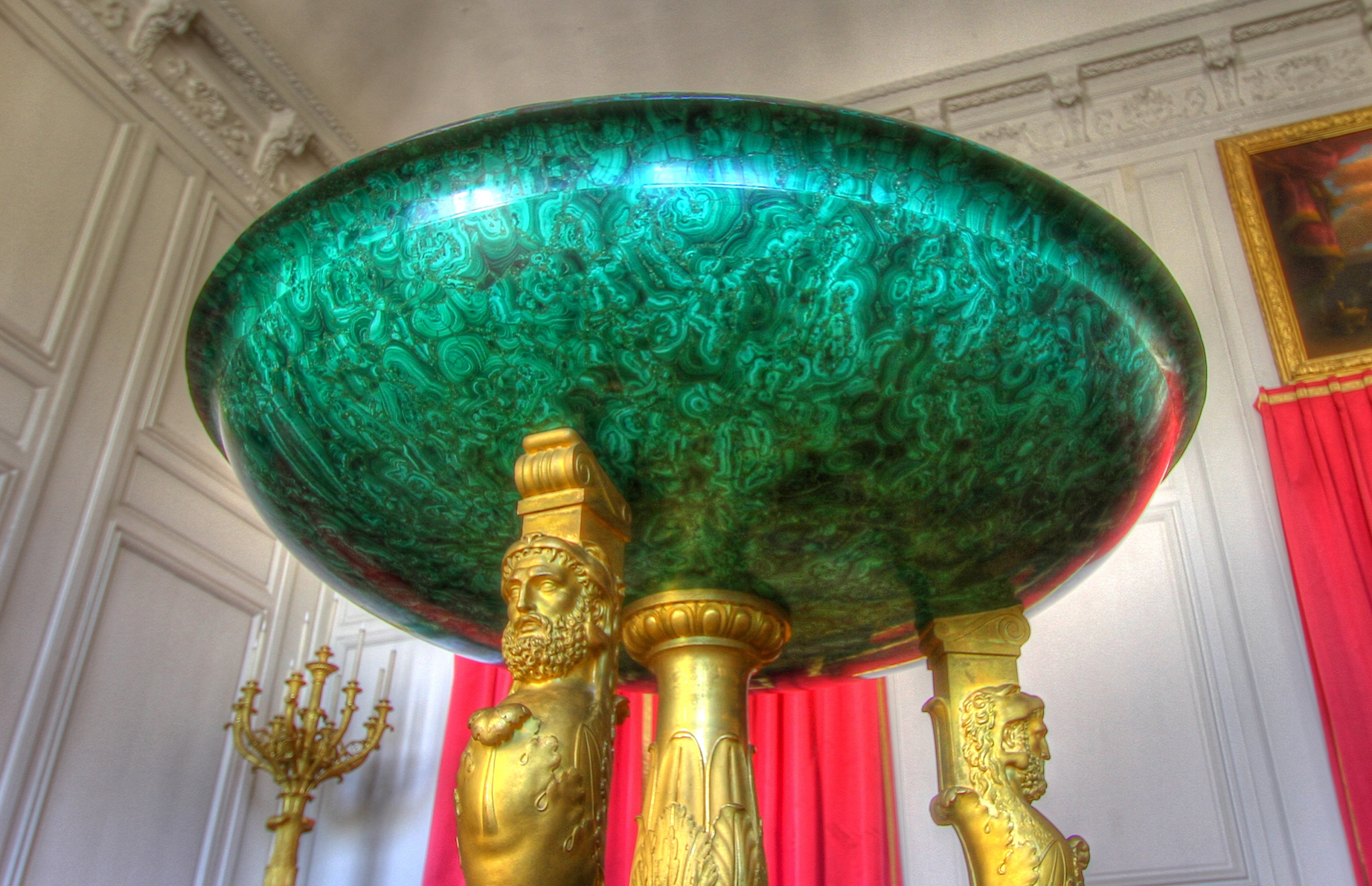 Today, the deposits in the Urals are somewhat depleted, and mines in the Democratic Republic of the Congo meet much of the world’s demand. Other sources include Australia, China, Chile, Arizona, New Mexico, North Carolina, and Utah in the United States, and Zambia. Demand for this gorgeous stone is as high as ever. Looking at the concentric circles of a polished specimen, it’s easy to see why it entranced the ancients. While modern lapidary enthusiasts may be skeptical of the magical powers attributed to it by their ancestors, it’s difficult not to be a little spellbound by malachite’s verdant rings.