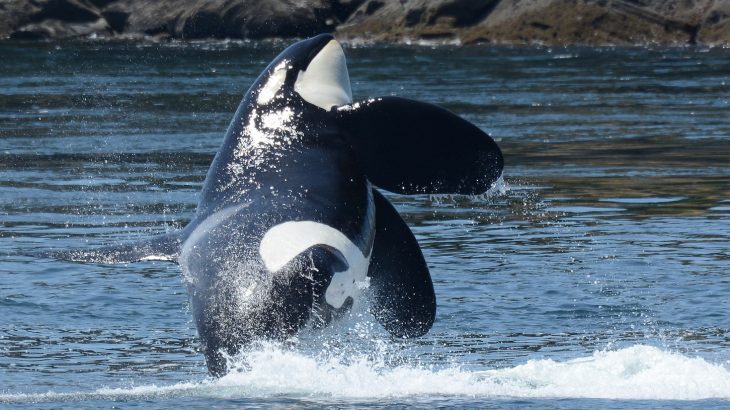 Male killer whales hunt and eat more than females do

78 whales are all that remain of the Salish Sea’s southern resident killer whale population.

Bombarded by a range of threats from shipping traffic to Chinook salmon declines, the species of killer whale was declared endangered in 2005.

Southern resident Killer whales are not the only killer whales in jeopardy, but it can be difficult to assess just how at risk a species is given the challenges of tracking the whale’s movements in the wild.

Researchers from the National Oceanic and Atmospheric Administration (NOAA) knew that monitoring the resident whales hunting patterns and Chinook salmon consumption could help show how vulnerable the whale population is to future salmon declines.

But in order to do that, the researchers had to find a way to record and survey the whales’ movements underwater.

First, the team attached 21 tags to southern resident killer whales in the Salish Sea between British Columbia and Washington. The tags allowed the researchers to track the whales and record whale calls underwater.

The researchers also recorded trips to surface and surface activity as well as collecting any salmon remains after a successful hunt. After recording the whales’ sounds and movements, they analyzed the recordings to figure out when the whale was hunting.

When a killer whale is closing in on its prey, it produces a series of particular clicks.

“Once a fish has been detected, the killer whale angles its body steeply downward, begins a descent to depths of about 50-300m, and then remains underwater for about 7-10min while pursuing the fish,” said Jennifer Tennessen, the lead author of the study.

The team input the whale movement data into a computer program which identified 126 successful hunts when the whale caught a salmon.

Not every deep dive was successful though which was surprising to the researchers as hunting requires a lot of energy.

The team found that not all whales eat their salmon prey at the surface and some eat the salmon on the way to the surface. Males also made more dives than females and caught more fish.

“[This] suggests that males may need to forage more in order to meet their greater metabolic needs,” said Tennessen.

The findings were published in the Journal of Experimental Biology.