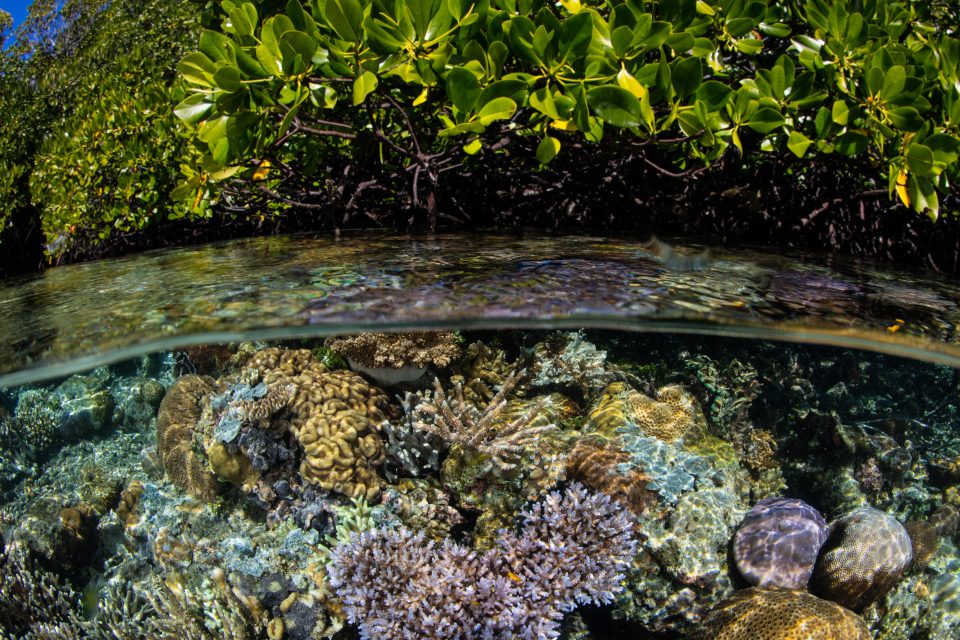 According to a new study from Northern Illinois University, about 31 million people live in coastal regions that are extremely vulnerable to the worsening impacts of climate change. As tropical storms intensify and sea levels rise, many coastal areas have defensive resources located just offshore that are often underestimated.

The researchers found that among the 31 million people living in high-risk communities, 8.5 million directly benefit from the severe weather-protection of mangroves and coral reefs. These natural buffers could help mitigate an enormous amount of future damage from tropical storms and rising sea levels.

Coral reefs and mangrove forests help shield the coast by absorbing some of the energy in powerful waves. Mangroves also help to stabilize the coastline by trapping sediments that serve as a barrier to erosion and storm damage.

Beyond protection, mangroves and coral reefs are critically important ecosystems that provide specialized habitats for a large number of species.

The findings of the new study highlight the urgent need for worldwide conservation and restoration of mangrove forests and coral reef systems. The researchers said that action is particularly needed in the most vulnerable coastal regions that lack the resources for more expensive adaptation measures, such as levees or sea walls.

“Coral reefs and mangroves serve as cost-efficient buffers against the adverse impacts of climate change, and they already play important roles in protecting human lives and livelihoods, while providing a multitude of biodiversity benefits.”

Previous studies have shown that a 100-meter-wide stretch of mangroves can reduce wave heights by as much as two-thirds. Meanwhile, coral reefs buffer wave energy by up to 97 percent, depending on the conditions.

The researchers wanted to identify highly vulnerable coastal regions that would benefit most from “ecosystem-based adaptation,” or the sustainable management of existing ecosystems, to address climate impacts.

The analysis showed that 30.9 million people live in regions that are highly vulnerable to tropical storms and future sea-level rise.

According to the study, the vulnerable regions that could benefit the most from ecosystem-based adaptation are coastal areas in Central America, the Caribbean, Eastern Africa, Southeast Asia, and the South Pacific region. In these regions, the team found that only 11 percent of reefs and 38 percent of mangroves are currently protected.

Study co-author Will Turner is the senior vice president of global strategies at Conservation International.

“Protection of mangroves and coral reefs is critical,” said Turner. “They have the potential to save lives, store carbon and support fisheries; the co-benefits they provide are great. At Conservation International, we’re working with local communities, carbon finance, governments and the insurance industry to ensure that generations will benefit from the protection and restoration of these ecosystems.”

The researchers noted that many of the world’s coastal zones are already experiencing the brutal consequences of extreme weather. Hurricanes Dorian, Maria, Harvey and Irma killed thousands of people and caused hundreds of billions of dollars in damages. By the end of this century, hurricane damages are expected to double.

The study authors pointed out that mangroves and coral reefs also create opportunities for recreation and tourism. Furthermore, in the most vulnerable coastal regions alone, mangroves store at least 896 million metric tons of carbon.

“Ensuring the resiliency of mangroves is a win-win-win for people, nature and the climate,” said study co-author Dave Hole.

“Mangroves store more carbon than any other forest ecosystem on Earth, drawing CO2 down from the atmosphere and storing it for decades, and so helping slow global warming.”

“As interest in ecosystem-based adaptation continues to grow, it’s vital that its multiple co-benefits are part of the conversation.”