Marine microalgae: A new and sustainable way to feed and fuel the planet • Earth.com 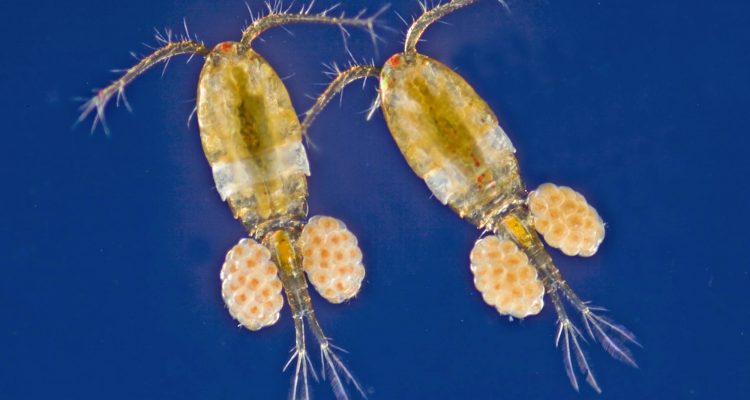 Marine microalgae: A new and sustainable way to feed and fuel the planet

Byadmin
Earth.com staff writer
Marine microalgae, also known as phytoplankton, provide the food base which supports the entire animal population of the oceans. The best known classes are the diatoms (Bacillariophyta), the dinoflagellates (Dinophyta), the green algae (Chlorophyta) and the blue-green algae
Comprising the bottom of the marine food chain, marine microalgae may soon become a top-tier contender to combat global warming, climate change and food insecurity, according to a study published in the journal Oceanography (December 2016).

“We may have stumbled onto the next green revolution,” said Charles H. Greene, professor of earth and atmospheric sciences at Cornell University, and lead author of the new paper, “Marine Microalgae: Climate, Energy and Food Security From the Sea.” The study presents an overview of the concept of large-scale industrial cultivation of marine microalgae, or ICMM for short.

ICMM could reduce fossil fuel use by supplying liquid hydrocarbon biofuels for the aviation and cargo shipping industries. The biomass of microalgae remaining after the lipids have been removed for biofuels can then be made into nutritious animal feeds or perhaps consumed by humans.

To make the biofuel, scientists harvest freshly grown microalgae, remove most of the water, and then extract the lipids for the fuel. The remaining defatted biomass is a protein-rich and highly nutritious byproduct — one that can be added to feeds for domesticated farm animals, like chickens and pigs, or aquacultured animals, like salmon and shrimp.

Growing enough algae to meet the current global liquid fuel demand would require an area of about 800,000 square miles, or slightly less than three times the size of Texas. At the same time, 2.4 billion tons of protein co-product would be generated, which is roughly 10 times the amount of soy protein produced globally each year.

Marine microalgae do not compete with terrestrial agriculture for arable land, nor does growing it require freshwater. Many arid, subtropical regions — such as Mexico, North Africa, the Middle East and Australia – would provide suitable locations for producing vast amounts of microalgae.

A commercial microalgae facility of about 2,500 acres would cost about $400 million to $500 million. Greene said: “That may seem like a lot of money, but integrated solutions to the world’s greatest challenges will pay for themselves many times over during the remainder of this century. The costs of inaction are too steep to even contemplate.”

Microalgae’s potential is striking. “I think of algae as providing food security for the world,” said Greene. “It will also provide our liquid fuels needs, not to mention its benefits in terms of land use. We can grow algae for food and fuels in only one-tenth to one one-hundredth the amount of land we currently use to grow food and energy crops.

“We can relieve the pressure to convert rainforests to palm plantations in Indonesia and soy plantations in Brazil,” Greene said. “We got into this looking to produce fuels, and in the process, we found an integrated solution to so many of society’s greatest challenges.”