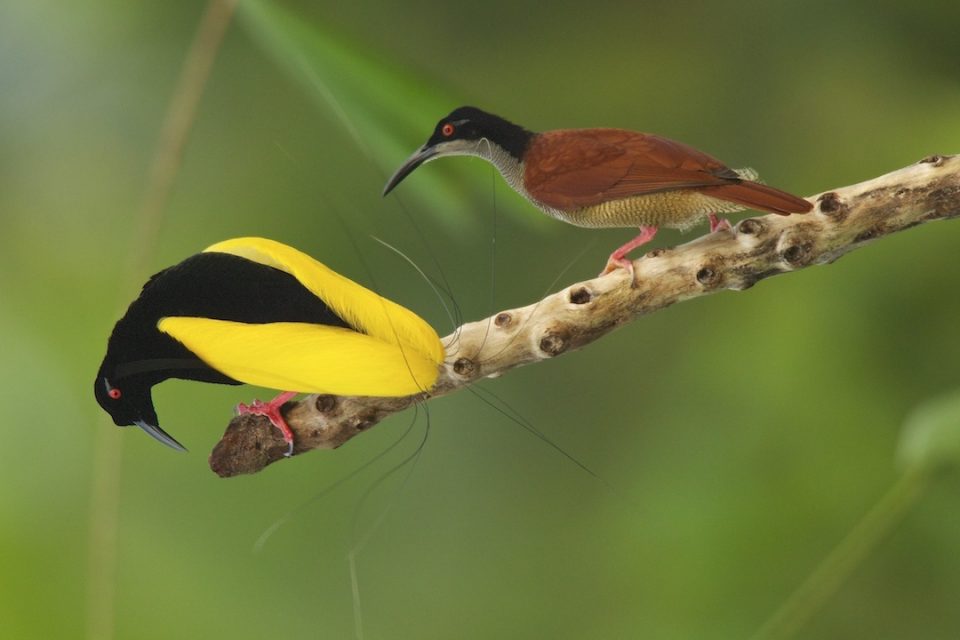 Female preferences drive the mating routines for birds of paradise

Male birds of paradise have some of the most colorful plumage and feather ornaments, but pretty colors are only a small part of the equation.

Wild dance moves and complex bird songs make up a wholly unique mating spectacle that the male uses to try and attract a female’s attention.

A new study, conducted by researchers from the Cornell Lab of Ornithology, has found that female preferences are a major driving factor in these mating rituals, and the female birds of paradise dictate what dance moves, calls, and where a male ends up performing.

Female birds of paradise judge a male based on his looks, songs, and moves, all of which help signify suitability in a mate.

The researchers say that the evolution of female preferences has created a “courtship phenotype” which are combinations of genetic and environmental traits that males use to improve their chances.

For the study, the researchers reviewed and analyzed 961 video clips and 176 audio clips from the Cornell Macaulay Library archive.

The researchers also examined 393 museum specimens from the American Museum of Natural History.

After observing different species and mating dances, the researchers found the more colorful a male is, the more complex sounds he makes. Birds that have interesting dance moves have a larger variety of calls.

There is room for self-expression within the confines of these mating rituals according to the study as many males will “experiment” with different moves and calls while still maintaining their attractive qualities.

Location also plays a role in mating for birds of paradise, as the researchers found males who court their females on the ground have more complex dance moves compared to birds who try and attract a mate in the treetops.

“On the dark forest floor, males may need to up their game to get female attention,” said Edwin Scholes, the co-author of the study.

The results of the study shed light on the mating rituals of one of the world’s most colorful groups of birds and show how influential sexual selection can be within the animal kingdom.