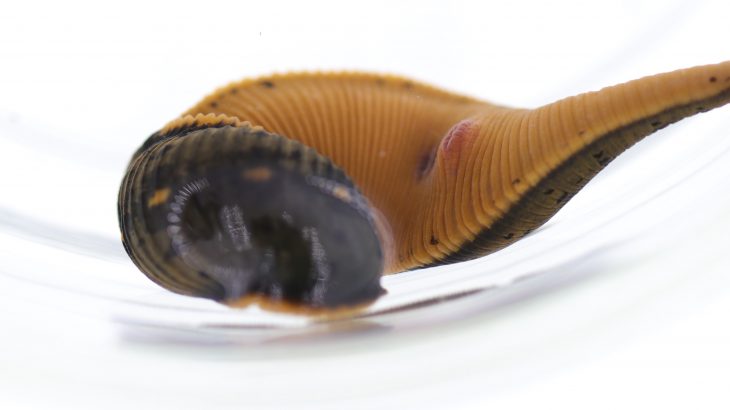 First medicinal leech discovered in North America in over 40 years

Let the celebrations commence! A previously unrecognized species of medicinal leech has been identified by scientists at the Smithsonian’s National Museum of National History.

This new species has been given an appropriately exciting name – Macrobdella mimicus, and is native to freshwater wetlands from Georgia to New York.

This new species of worm is described in the Journal of Parasitology by an international team of museum scientists led by Anna Phillips, the National Museum of National History’s curator of parasitic worms.

“We found a new species of medicinal leech less than 50 miles from the National Museum of Natural History – one of the world’s largest libraries of biodiversity,” Phillips said. “A discovery like this makes clear just how much diversity is out there remaining to be discovered and documented, even right under scientists’ noses.”

Back in the 1700s and 1800s, doctors used leeches to (unsuccessfully) treat a wide range of conditions. These physicians believed that the leeches helped remove “bad blood” from a patient’s body. Phillips and her colleagues have been exploring the wild world of medicinal leeches in North America for years.

After collecting numerous orange-spotted, olive-green leeches found in a Maryland swamp, Phillips and her team believed they belong to the known species M. decora. But a round of DNA sequencing showed significant differences from the DNA of this species.

Although this molecular discrepancy was unexpected, it led to the scientists reexamining their specimens. They quickly found a physical difference in this new species that separated it from M. decora – multiple reproductive pores along the bottom of their bodies, known as gonopores and accessory pores, which were located in a different position relative to those on the M. decora.

The team then went back into the field and found more leeches from South Carolina that had the same accessory pore positioning.

“Then we sequenced [their DNA], and they all came out more closely related to the leeches we had found in Maryland than to anything else known to science,” says Phillips.

Phillips then went into the Smithsonian’s parasite collection to analyze dozens more North American leeches. “All of a sudden, I started finding these things everywhere,” she says. These leeches had been found in locations from Georgia to Long Island, New York – with the oldest specimen dating back to 1937.

The historical records from the Smithsonian, along with specimens analyzed from other museums, confirms that the species was not recently introduced to the area and does not represent a newly evolved species.

“It’s been here this whole time,” Phillips says. “We just hadn’t looked at it in this new way.”