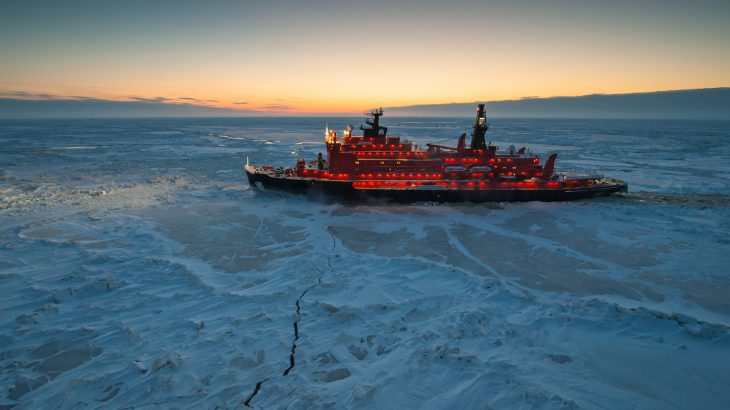 As years have passed, melting ice in the Arctic has opened up shipping routes and made it easier for ships to navigate the once ice-covered seas. This has been great for the shipping industry, but bad for the Arctic environment. Almost all ships are powered by fossil fuels, and many use heavy fuel oil, which emits black soot when burned and creates a destructive, toxic mess when it’s spilled. While few international rules have been passed to protect the Arctic ecosystem from these threats, a proposal for a heavy fuel oil ban in the region has been gaining support.

“For a long time, we weren’t looking at the Arctic as a viable option for a shortcut for Asia-to-Europe, or Asia-to-North America traffic, but that’s really changed, even over the last couple of years,” Bryan Comer, a senior researcher with the International Council on Clean Transportation marine program, told Grist. “It’s just increasingly concerning.”

With the Arctic region warming almost twice as fast as the rest of the planet, this ecosystem has become increasingly fragile. In the past, only enormous, nuclear-powered icebreakers were able to forge through these frozen seas. But these days, even commercial ships are able to move through this region from around July to October – although sometimes with icebreaker escorts.

“Because of climate change, because of the melting of sea ice, these ships can operate for longer periods of time in the Arctic and the shipping season is already longer than it used to be,” Scott Stephenson, an assistant geography professor at the University of Connecticut, told Grist.

Sian Prior, a lead advisor to the HFO-Free Arctic Campaign, told Grist that the best way to move forward now is to get rid of fossil fuels entirely in the Arctic region. He suggests installing electric systems with possibly battery storage or hydrogen fuel cells. But because these technologies are not currently available for ocean-going ships, the next option would be to run ships on liquefied natural gas.

This is still a long way off, however, as many ships still run on heavy fuel oil, which is made from the residues of petroleum refining. In 2015, this fuel made up 57 percent of total fuel consumption in the Arctic, and accounted for 68 percent of ships’ black carbon emissions – according to the International Council on Clean Transportation.

Although black carbon usually makes up only a small share of total emissions, these small black particles absorb the sun’s heat and thus directly contribute to warming the atmosphere. After a few days, the particles fall back down to earth, darkening the snow and resulting in it absorbing more sunlight, causing snowmelt and even more warming. “It’s dirtier when you burn it, the options to clean it up are limited, and the length it’s likely to persist in the environment is longer,” Prior told Grist.

Beginning in April, the International Maritime Organization – the U.N. body that regulates the shipping industry, began laying the groundwork to ban ships from carrying and using heavy fuel oil in the Arctic region. But due to the length of the rulemaking process, no policy will take effect before 2021.

While easier shipping paths make for better business and trade, its effect on the environment is clear and dangerous. If we’re looking to protect our environment while also allowing these shipping lanes to remain open, it’s imperative that policies be put in place to allow for both.