The ruins of Mesa Verde offer a rare glimpse and a cautionary tale • Earth.com 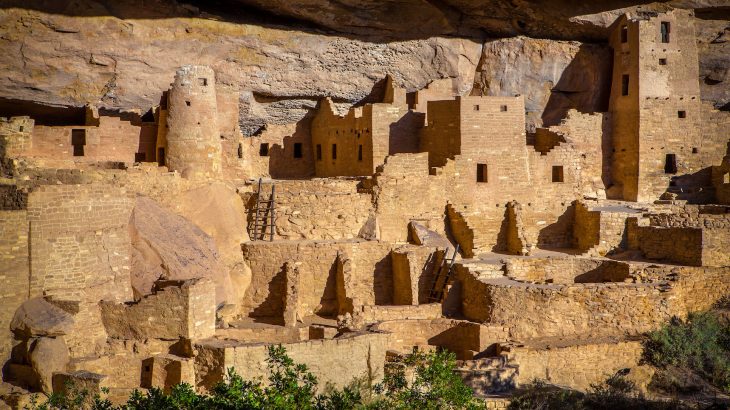 Mesa Verde National Park is an icon in the American Southwest.  Central to the park is the iconic Cliff Palace, made of native stone walls nestled on a cliff ledge, reaching to round and square towers.  The whimsical shape the ruins cut into the cliff is indeed a palace made out of the desert. Mesa Verde is haunting, a place of great size built in the desert and in turn left to be occupied by the emptiness implied by the desert itself.

Photos framed in hotel rooms and restaurants, printed on postcards sold in gas stations across the southwest fail to capture the beauty of Cliff Palace.  Walking through the place guided by a ranger, it almost feels like the ruins protected by an overhanging stone alcove were abandoned a week ago.

The National Park Service reports that the Cliff Palace contains 150 rooms and 23 ceremonial kivas.  There were once amazing artifacts left in Mesa Verde, pottery jewelry and perhaps much else we’ll never know.  Near the turn of the last century, many of the artifacts from the Mesa Verde region were stolen as souvenirs or to sell on the black market.

Mesa Verde was actually part of the impetus to create the Antiquities Act, which allows the creation of National Monuments by the US president. Partially the act was meant to seize control of ruins like Mesa Verde and prevent the raiding of artifacts.  The National Park Service website quotes part of the Antiquities Act passed in 1906 on the preservation of ruins and artifacts

“ “… The examination of ruins, the excavation of archaeological sites, or the gathering of objects of antiquity…” on lands administered by the Departments of Interior, Agriculture, or War be carried out only after a permit to do so had been issued by the Secretary of the department responsible for the land in question. The permits were to be issued only to institutions “…properly qualified to conduct such examinations, excavations, or gatherings…” Furthermore, the objective of these permitted activities was to be “…for the benefit of reputable museums, universities, colleges, or other recognized scientific or educational institutions, with a view to increasing the knowledge of such objects.” ”

The National Park Service says that Mesa Verde National Park was created by Theodore Roosevelt on June 29 1906 to preserve ‘the work of man’ making it the first park of its type at the time.  The creation of a park at Mesa Verde is just the thinnest veneer of its deep history and importance to the region and its people.

The name Mesa Verde itself is Spanish, meaning literally ‘green table’ but referring to the flat mountain (or mesa) on the side of which the cliff houses were situated on, abundant with agriculture at its top.  The National Park Foundation reports that Mesa Verde contains a total of 4,000 known archaeological sites the oldest dating back about 1,400 years to 550 A.D.

At the earliest date, the elaborate cliff dwellings that the park is known for weren’t yet begun.  The first people in the Mesa Verde area lived in pit dwellings atop the mesa. Eventually the ancestral Puebloan people who lived in Mesa Verde made their way to the sheltered cliff walls where they built the ruins which make them famous today.  The new location for homes made life more tedious for the ancestral Puebloans who had to climb and walk to the top of the mesa or down to the base for farming, hunting or to collect water. Cliff dwellings did offer one large advantage though: they were defensible.

A paper published on Academia.edu reports that there are numerous archaeology sites showing evidence of violence and raids through the Mesa Verde region in last half of the 12th century.  At least nine sites showed mutilated human remains.  It may be that violence in the Mesa Verde region pushed the ancestral Puebloans to build their new cliff homes as cliff fortresses rather than cliff palaces.

Throughout the southwestern United States, cliff home ruins are notoriously hard to access.  In some places foot holds are carved into cliff faces, creating a sort of precarious stairway.  In other places, access seems to have been made only by ladders. It’s easy to see how ladders could be drawn up or pushed over with intruders on them.  Equally one person armed with nothing more than rocks could easily thwart an attacker trying to climb tiny steps carved out of rock.

Being set into cliffs of the same color as the homes themselves, many smaller cliff dwellings are hard to find and some are probably unknown to archaeologists to this day.  Sometimes only rock blackened by fire smoke centuries before gives away a ruin. Mesa Verde was undoubtedly a dynamic place, connected to others not only by conflict but by trade and culture.

Sea shells from the Pacific Ocean have been found at Mesa Verde and textiles, food or pottery were traded for other goods such as turquoise or cotton.  The people living in Mesa Verde also undoubtedly had connections to other ancient populations throughout the southwest such as those at Chaco Canyon. Today, much of this culture is maintained by modern Puebloan people such as the Hopi and Zuni tribes of the southwest.

Historically, the ruins of Mesa Verde have been seen as a cautionary tale.  People came and built an impressive civilization but in the end were forced to abandon what was essentially over reach due to drought.  There is evidence that drought may have played a role in the eventual abandonment of Mesa Verde, however it’s not the whole story. The ecological richness of the Mesa Verde area may have something to say about the ruins as well.

In other parts of the southwest, the Ancestral Puebloans left behind homes for a generation or two only to later return and again occupy them.  The Puebloan people still remember Mesa Verde. It seems that the people who once lived in the Mesa Verde cliff dwellings were always willing to walk away, understanding that life in the desert demands as much.  It’s only when western values are placed on Mesa Verde, do we find it a ghost town instead of a living place?