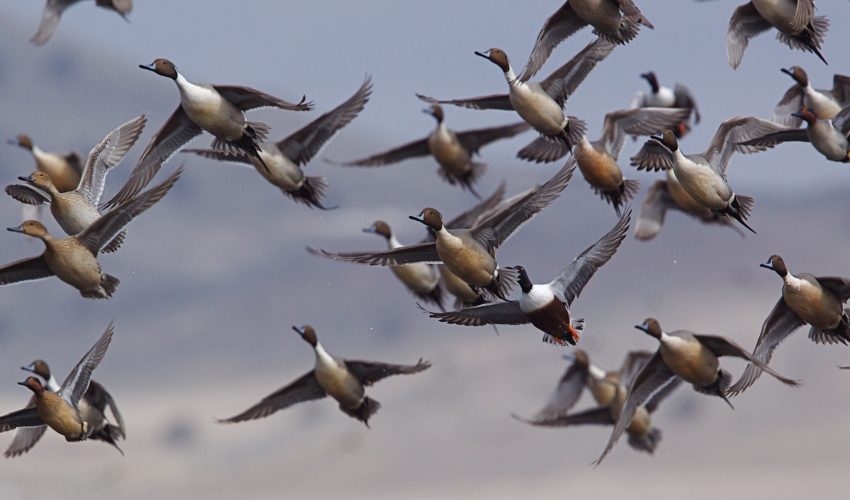 A.I. specialist Louis B. Rosenberg notes that flocking behavior makes animals “smarter together.” That is, the decisions made by the group as a whole confer advantages to each member as an individual.

There’s a reason that flocks and other types of animal swarms are appealing to artificial intelligence researchers: they provide complex, yet rule-bound, systems that can be studied for efficiencies and inefficiencies and then applied to human problems. One of the more fascinating and complex flocking systems occurs among birds. While of course the movements and decisions made by a flock comprising a single species are complicated in and of themselves, even more byzantine are the interactions of groups known as mixed species foraging flocks. They’re exactly what they sound like: groups of birds of different species who forage for food together.

It is important to distinguish these flocks from feeding aggregations. Feeding aggregations usually occur around static sources of food, such as those provided by fruiting trees. Though of course the different species of bird who frequent these trees must interact on some level as they make use of the same resource, the social dynamic is far less complex than that exhibited when birds of different species actively search for food together. There is something of a spectrum in this sort of collective behavior.

For example, seabirds such as cormorants, murres, murrelets, gulls, and kittiwakes often participate in foraging efforts that converge around large schools of fish. This isn’t quite as simple as plucking fruits off of a tree. And numerous factors drive the interaction. Most mixed species foraging flocks have one or two “nuclear” species that propel the “associate” or “follower” species forward.

Smithsonian ethologist Martin Moynihan pioneered much of the work in this area in the 1960s, though the phenomenon has been known since the mid 1800s. It is thought that diving birds, such as murres and murrelets, may be the nuclear species in these interactions, as their underwater foraging drives fish toward the surface, allowing surface feeders like gulls to take their pick. Intriguingly, the foraging habits of cormorants who join the smorgasbord may actually disperse the fish in a way unfavorable to the other diners and thus act as “suppressors” per a University of Manitoba study from 1987. There’s a good deal of thievery as well: gulls are notorious kleptoparasites.

Even more complex are the behaviors of forest birds, both in the tropics and in the temperate zones. Like seabirds, forest-dwelling birds form flocks led by one or two species and followed by other. But, the number of species is generally much higher in these groups—up to 20 or more in the tropics—and the interactions are consequently more complex. Further, the food they are in search—usually insects—is dispersed and hidden among the leaves and branches, and on the forest floor, creating a greater challenge for the foragers.

In the tropics, these groups are more common during the dry season, when birds are not breeding, though they occur all year round. In temperate zones, they occur mainly in winter. The reason seems clear: these group interactions improve the efficiency of locating and consuming food, especially in times of scarcity. Because most of the birds that participate in these flocks are relatively small, they also gain some protection from predators. More birds means more eyes on the sky, scanning for hawks and other threats.

This is particularly advantageous to follower species. Leader species tend to be the most vocal and the most social. In the tropics they often include babblers, tanagers, and warblers, while in temperate zones they are usually comprised of tits, titmice, and chickadees. Follower species such as wrens, nuthatches, and woodpeckers in temperate zones and drongos, woodcreepers, and birds of paradise in tropical zones, have learned to interpret their social cues, both in locating food and in responding to their predator alarms. Because they are usually more specialized in where they find their food than nuclear species, which tend to be more generalist, finding food requires more searching and thus more energy.

By having a free lookout system in the nuclear species, they are able to devote some of the energy they normally expend scanning for predators foraging instead. Many follower species join and leave the flock over the course of a day. Some only persist until the flock leaves their territory while others are emboldened to leave their normal haunts. Despite the fact that nuclear species appear to obtain limited benefits from this mutualistic relationship, they appear not to mind much. Though there is some jockeying for position in these flocks, there appears to be little true physical aggression.

There is a fair bit of sneakiness though. A 2017 Kyoto University study found that willow tits (Poecile montanus), leaders of these types of flocks, reduced their calling when they were attempting to cache food for later use, indicating an awareness that their usual calling would attract other species, which could conceivably raid the caches.  The greater racket-tailed drongo (Dicrurus paradiseus), conversely, mimics the calls of other species that tend to participate in mixed species flocks in an effort to recruit more members according to a 2006 study from the University of Massachusetts.

Other species, like antshrikes, may feign alarm in an effort to get other birds to drop their food, which can then be easily snapped up. The growing body of research on these types of interaction suggest highly co-evolved relationships in some cases. Many tropical birds are rarely seen outside of mixed species flocks, suggesting a level of dependence on that foraging strategy. This specialization has major implications for birds living in increasingly fragmented habitat. Fragmented habitat tends to be less species-diverse and thus mixed species flocks do not function as they might in virgin forest. Encouragingly, though, mixed species flocking does appear to have some benefits in fragmented territory: shy follower birds are much more likely to move from fragment to fragment if chaperoned by nuclear species.

The ephemeral and tenuously predicated nature of this ecological relationship underscores the need for responsible land stewardship and preservation. These colorful cavalcades are, perhaps even more than their constituent species, crucial to the balance of their environments.