Plight of the sea monk: Monkfish and sustainable fishing • Earth.com 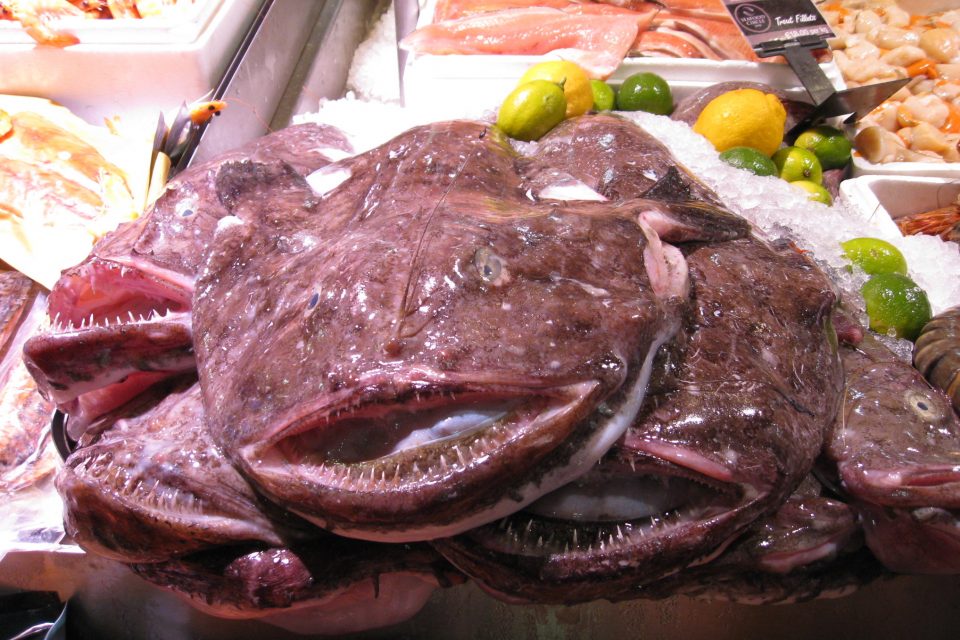 Plight of the sea monk: Monkfish and sustainable fishing

Gastronomes the world over are familiar with monkfish. Once referred to as the “poor man’s lobster” due to its similar consistency and use it as a lobster substitute, it now features prominently on the menus of many fine restaurants. It was even served this year at the White House Correspondents’ dinner; comedian Michelle Wolf wryly remarked that it was … “fine.”

This dubious ascendancy is interesting in that, prior to the mid-1980s, monkfish was considered a trash fish, merely bycatch from other bottom-trawling enterprises, notably those in search of scallops. However, due to declining fisheries for cod and other whitefish, it began to gain popularity in the 1990s. Now, it rates as a delicacy; even its liver have been vaunted as a piscine version of foie gras.

Tastes in seafood are notoriously driven by market availability. What was once an undesirable bottom dweller becomes haute cuisine in short order when previously beloved species are overfished and unavailable. Patagonian toothfish became Chilean sea bass. Slimeheads became orange roughy. And the dogfish lost its identity entirely and became the basis for processed foods like the fried fish served with chips in the United Kingdom. These species pay dearly for their new-found status as preferred dishes. Many have been overharvested, a huge problem for slowly reproducing species such as the orange roughy and the monkfish. 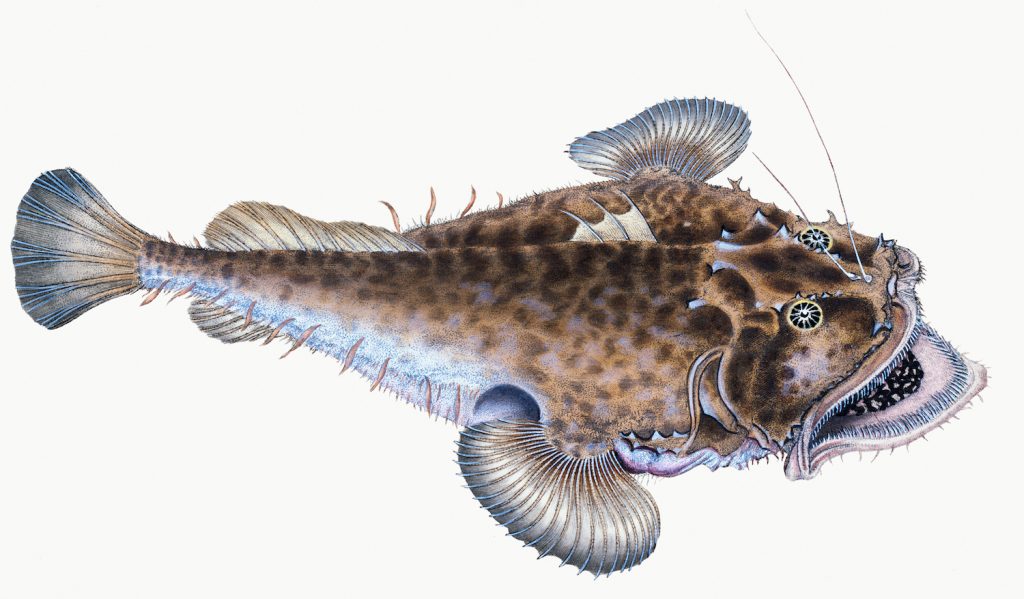 The species served as monkfish is typically one of five of the seven or eight species in the genus Lophius of the family Lophiidae, a group of anglerfish which are characterized by their use of fleshy lures dangling from the first spine of their dorsal fins to entice smaller fish toward their gaping maws. In North America, the species most often served is L. americanus, which ranges from the shores of Maine to those of northern Florida. L. litulon is found in the Pacific, as is the related Lophiodes caulinaris. L. piscatorius and L. budegassa are harvested from European waters. And L. vomerinus is taken off of the coast of southern Africa.

All of them are large, squat fish with enormous mouths and jointed, arm-like caudal fins adapted for walking along the bottom. Females may reach lengths of 5 feet; males are usually smaller. They are typically found from the tidal line up to half a mile deep. Their diets consist of smaller fish, including conspecifics, and they will also take crustaceans and even seabirds that venture too close. With needle-like, recurved teeth, monkfish’s prey has little chance once its jaws gape.

The breeding habits of the Lophius species are particularly intriguing. Females do not become sexually mature until 7-10 years of age. When they do, they release so-called veils, long, gelatinous strips that contain up to a million eggs. These eggs are carried by the currents until they hatch. The larvae spend some 120 days drifting as zooplankton before settling to the continental shelf and assuming the largely bottom-dwelling lifestyle of an adult. This information has been pieced together from centuries of research. For such ubiquitous species, their habits are rather cryptic. And they are apparently quite difficult to keep in captivity. Their ravenous appetite seems to dissipate in the confines of an aquarium and they often require hand-feeding to survive.

Monkfish and their relatives have long been remarked upon by human observers. Even Aristotle was moved to comment on the strange habits of anglerfish. One of the more fascinating legends concerns the “sea monks” noted in 16th century natural history manuscripts. Accounts dating to at least the 13th century reference fish that supposedly resembled human monks, with tonsured heads and peasant-like features. Circa 1545, the king of Denmark, Christian III, received reports of a strange sea creature landed in the Strait of Øresund between Sweden and his own nation. Matching earlier descriptions, it supposedly had a human-like head and fins. He summarily ordered that the creature be buried to avoid arousing the superstitious sensibilities of his subjects. Numerous further reports ensued over the years, resulting in hilarious illustrations of monk-like figures sporting fins in natural history manuscripts. Some have speculated that these were actually monkfish. However, other authors claim that they were squid, angel sharks, or seals.

Questionable mythological origin story aside, monkfish—and the fishing practices that harvest them—are front and center in issues of contemporary marine conservation. During their brief period as cheap, yet marketable meat in the 1990s, fishing intensified and by 1999, quotas had to be set by the New England Fisheries Management Council after fisherman noted decreasing yields and the landing of much smaller specimens, indicating that their reproduction was not keeping pace with demand. Other countries followed suit.

While these measures have in a number of cases been shown to have a positive effect, the methods still used to harvest monkfish and other bottom-dwellers have devastating effects on the ocean floor. Bottom trawling is rated as the most detrimental fishing practice in existence. Using massive apparatus with doors weighing 6.5 tons and enormous wheels that bounce along the ocean floor, these nets scour up anything in their paths. In addition to capturing unwanted species, they devastate slow-growing coral communities. Enormous areas of the seas have been scrubbed of their vital demersal ecosystems because of bottom trawling. Some sources on sustainable seafood still list them as being acceptable to eat due to rising populations in some areas. But methods used to harvest it, even at “sustainable” levels, should give any conscious seafood consumer pause.

Sea monster it might be—I mean, come on, look at the picture—the monkfish is nonetheless an instructively well-adapted denizen of the deep, one whose ecosystem role is poorly defined and quite likely important.