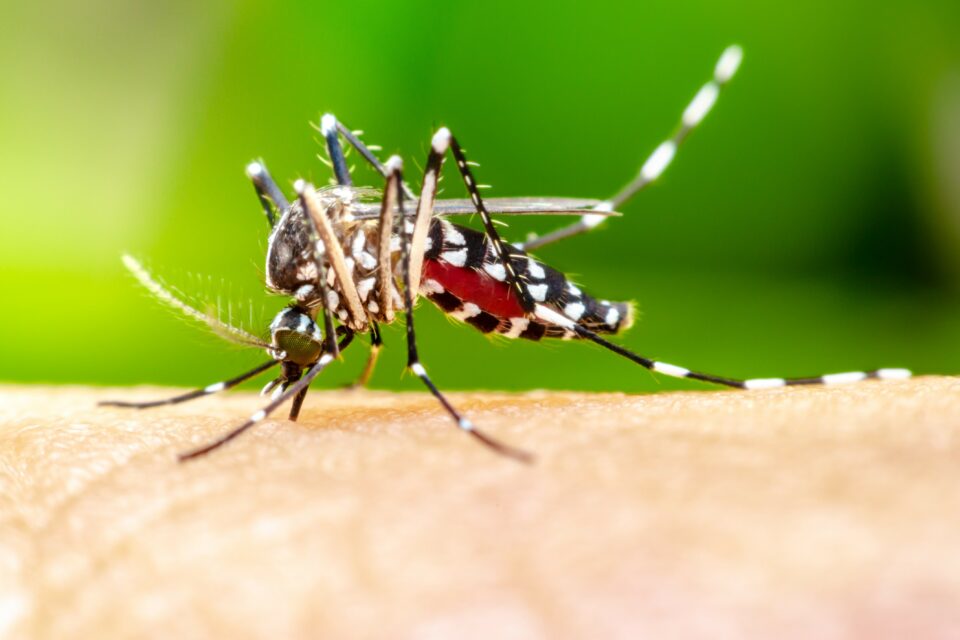 According to the World Health Organization, mosquitos are the deadliest animals on Earth. The diseases they pass on to humans, including malaria, Zika, West Nile, Chikungunya and dengue, are responsible for around 725,000 deaths each year. The insects use olfactory cues to locate humans with an unerring accuracy, preferring to bloodfeed on humans over other animals, and so the means by which they detect human presence has become the object of scientific investigation.

More than a decade ago, Leslie Vosshall, a Howard Hughes Medical Institute (HHMI) Investigator, turned her attention to understanding the mosquito olfactory system in a quest to find ways to blunt the insect’s uncanny ability to locate human prey. “I wanted to do something the public could be excited about,” she says. And her new work would indeed prove to have a major impact – just not what she’d anticipated. Vosshall describes the results as “a huge, staggering surprise.”

Mosquitos detect chemical signals using odor receptors that are located on nerve cells (neurons) found on the antennae and some of the mouth parts. The accepted understanding, based on the Nobel Prize-winning research on mice by Linda Buck (now at Fred Hutchinson Cancer Center) and Richard Axel at Columbia, was that the smell sensing systems in animals are exquisitely specialized and organized. Each olfactory neuron has just one type of receptor, which detects a specific odor and then connects to just one structure (called a glomerulus) in the olfactory bulb of the brain.

According to this paradigm, a mosquito would be expected to have separate neurons that detect the smell of human body odor, and the presence of exhaled carbon dioxide (CO2), and it might be a straightforward process to disable these particular neurons and render mosquitos insensitive to human cues. Or that’s what the researchers thought. “We as a field were so influenced by Buck and Axel,” says Vosshall (who was a postdoc student in Axel’s lab). “Those were the rules.”

Initially, the researchers analyzed the DNA in the complete genome of a blood-sucking mosquito, something that had not yet been undertaken. “No one had done genome editing before in part because the genome was so fragmented,” Vosshall explains. Then, Meg Younger a former postdoc in the lab set out to try to answer a puzzling question. Mosquitoes are attracted to both the CO2 that people breathe out and to human body odor.

“But there’s something magical about adding those two ingredients together, where one plus one equals twenty,” she says. When both olfactory cues are present together, the insects become very excited and focused, and they start to hunt for humans ferociously. It is as though the two stimuli become amplified somehow in the olfactory system.

In order to understand what was happening, Younger tried to identify which olfactory neurons responded to CO2 and which to body odor, and then to trace the pathways of the signals to the brain. She used the gene editing tool CRISPR to slip a fluorescent marker protein into the neurons that had receptors for CO2 and another marker into those that could sense chemicals from body odor. That’s when the research took an unexpected turn. “It was like Alice in Wonderland – where nothing makes sense,” Vosshall says.

The results, published in the journal Cell, show something altogether new in the world of olfactory systems. The fluorescent receptor genes indicated that individual neurons did not only carry receptors for one chemical cue, as was previously thought. Instead, the neurons were chock full of multiple different types of receptors. We found that “all the Buck and Axel rules were thrown in the garbage can by mosquitos,” says Vosshall.

The results were so startling that Vosshall’s lab has spent years painstakingly proving that they were actually real, using several additional lines of evidence. For instance, Olivia Goldman, a PhD student in the lab, harnessed a relatively new and revolutionary technique called single nucleus RNA sequencing (snRNA-seq) to probe which genes are turned on in individual neurons. The approach confirmed that each neuronal cell does indeed use many different kinds of receptors.

In addition, the researchers teamed up with scientists at the Swedish University of Agricultural Sciences, who had done ground-breaking research using electrodes inserted into individual olfactory neurons in mosquitos. That method also confirmed that a single mosquito neuron can detect different smells – even two different ‘flavors’ of body odor, a perfumy smell and a stinky foot odor, which require two entirely different classes of receptors.

Those results “were a huge relief,” Vosshall says. She anticipated widespread skepticism to her conclusions, “so the number of levels of evidence that we used to prove it was intense,” she says. In fact, many scientists did challenge these new findings at first. But not only was the supporting evidence overwhelming, similar findings were also emerging from neuroscientist Christopher Potter’s lab at Johns Hopkins University School of Medicine.

Working with both the fruit fly and a mosquito species, Potter’s team published a paper in eLife in April suggesting that “co-expression of chemosensory receptors is common in insect olfactory neurons.” In the past, the conventional wisdom of one receptor per smell and one receptor per neuron was so strong that there was no reason to probe for multiple receptors, says Potter. “Now we know to look for it.”

The findings of Vosshall and her team have overturned the conventional model of the neural circuity animals use to detect, and distinguish between, thousands of distinct smells. “This is a big deal,” says Potter. “It really changes the way we think the insect olfactory system is working.”

The added complexity of the insect olfactory system makes perfect sense in evolutionary terms, as mosquitos must find food in order to survive. The presence of different types of odor receptors on each neuron enhances the insects’ ability to detect exhaled CO2 along with a whole array of body smells. If some receptors were to be blocked, a mosquito would simply use others that remained intact.

“It is a really good trick,” explains Vosshall. “Mosquitoes have Plan B after Plan B after Plan B. To me the system is unbreakable.” That’s obviously not good news for the effort to reduce the toll from mosquito-borne diseases, such as malaria, yellow fever, and dengue, by trying to block receptors. But perhaps an alternative strategy might be to overwhelm the whole system with alternative smells, adds Potter. At least now “we have a more realistic view of what we are up against,” he says.

In the meantime, Vosshall aims to compare the olfactory neurons of blood-dining mosquitoes with those from purely vegetarian mosquito relatives to see if the more extreme receptor complexity is a unique adaptation for those species that only hunt humans. And as for the puzzle Vosshall first started to probe – how the combined sensing of both CO2 and body odor greatly amplifies the message to the brain? One of her former postdocs, Meg Younger, is now tackling the question in her new lab at Boston University.